Pacquiao: I'm Really Thankful To Be Working With Al Haymon

WBA "regular" welterweight champion Manny Pacquiao is very eager to defend his title against Adrien Broner in at the MGM Grand in Las Vegas on the 19th of January, ending a two-year absence from the ring in the United States.

Broner, a four division world champion, is taking part in the biggest fight of his career.

About facing Broner, Pacquiao said: “I chose Broner, because I believe we can have a good fight and entertain the fans - we cannot underestimate him. I want to prove I'm still in boxing. I want to entertain people. My opponent is fast and a caliber fighter. We have to work hard and train hard for this fight.” 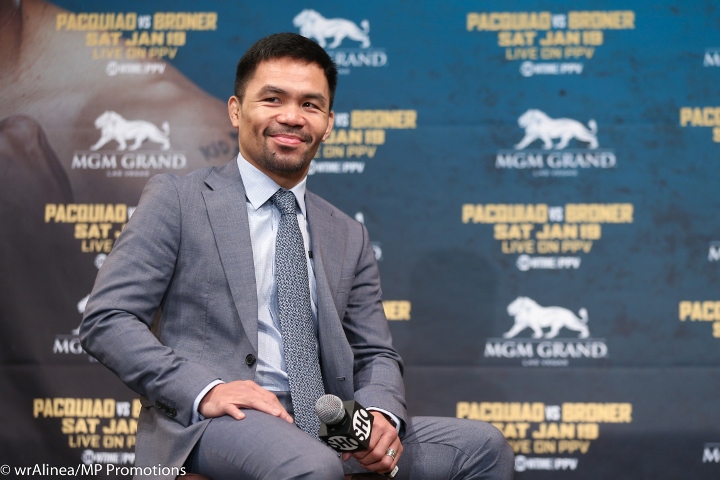 Pacquiao, who is the only fighter to win world titles in eight different weight divisions, pumped new life into his boxing career in July when he delivered a knockout against Argentine slugger Lucas Matthysse in July.

The bout is also the first for Pacquiao since signing on with powerful adviser Al Haymon, who is also the founder of Premier Boxing Champions. Pacquiao had been promoted by Top Rank for over a decade.

“I have only good things to say about Top Rank – they helped me a lot. But I’m really thankful to be partnered with Al Haymon and have a chance to work with him," Pacquiao said.

He hopes a win over Broner will lead to a fall rematch with Floyd Mayweather Jr - who won a decision over the Filipino fighter since May of 2015.

"I have to pass through him before fighting Floyd Mayweather. I want to prove to the boxing fans that Manny Pacquiao is still in the pack. You will see more fights with Manny Pacquiao here in the United States," Pacquiao said.

“Broner is young and he’s fast – and he’s fast with his mouth. There will be more action in the ring – we know what the people want. It’s going to be a once-in-a-lifetime opportunity to see a fight you will never forget."

wait pac said this? :lol1: after all these years we still know jack **** about al haymon. i mean other than the rumor that he is maybe into trannies. but he always struck me as a gentleman. bob arum on…

[QUOTE=HURTFEELINGS;19291426]This is a stab in the heart for a lot of pac fans......Pac fighting under mayweathers promotion, under Al Haymon. He killed HBO boxing, Goldenboy, TR, all his major competitors AND TRUMP IS GETTING IMPEACHED [B][SIZE="7"]WTG AL[/SIZE][/B] :beerchug:[/QUOTE] Nope. pac…

[QUOTE=Kiowhatta;19291171]Well Pacman ought to know - he dealt with a lot of malingering snakes, naysayers, charlatans and fraudsters in his time in Parliment - so Hayman speaks that language. Haymon's goal is to destroy boxing as we know it, cause…