Things are going to be interesting in the coming weeks, as Manny Pacquiao's team members are insisting that his contract with Top Rank has expired.

Pacquiao himself has refused to comment on the matter, but he's made no mention of Top Rank, or longtime trainer Freddie Roach, when discussed his planned return on June 24th in Malaysia against WBA 'regular' welterweight champion Lucas Matthysse.

Pacquiao has only mentioned Golden Boy Promotions CEO Oscar De La Hoya, who promotes Matthysse, as his partner on the June card. 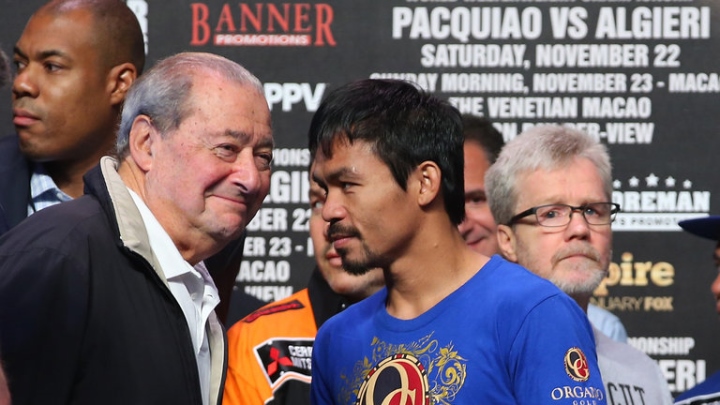 According to Pacquiao’s lawyer Eldibrando Viernesto, the last fight under promotional deal was against Jeff Horn in Brisbane, Australia last July.

“I reviewed the contract and I found out that Bob Arum has no more say even in the rematch, should there be any, between Manny Pacquiao and Australian boxer Jeff Horn,” Viernesto said to The Philippine Star.

“Pacquiao is under contract with Top Rank for reasonably long period of time but I don’t know when the contract will expire,” Arum told BoxingScene.com.

Aquiles Zonio, who is Pacquiao's media relations officer, made allegations against Arum, claiming the veteran promoter prevented Pacquiao from staging several bouts outside of the United States.

“The first one was the planned Pacquiao Dubai fight then the other was the fight supposed to be staged either in Macau or Hong Kong,” Zonio wrote in a Philboxing article.

“In two separate occasions, Arum called up Pacquiao’s financiers threatening to file a lawsuit if Top Rank is not included in the promotion. They cowed in fear resulting to the scrapping of the fight.”

“This time, Arum, for the third time, tried to sabotage the fight by calling up Pacquiao’s Malaysian financial backers. No dice, old man. He was ignored."

Pacquiao plans to make a formal announcement early next month on the Matthysse fight. And De La Hoya, according to Pacquiao, will fly to the Philippines to help promote the bout.

“De La Hoya called up asking me if we could reset the Manila launching after the Holy Week. That’s why it (Manila press conference) was moved to April 4,” Pacquiao said.

[QUOTE=jas;18608066]further proof fighters shouldnt sign with arum but he lures em with signing on fees [B]pac would be way richer and have a better resume if he left arum and signed with anyone else such as haymon[/B][/QUOTE] disagree. pac would…

[QUOTE=The Big Dunn;18607906]WTF are you talking about? Don’t get mad at me that your idol has to take orders from an 80 yr old man. Maybe the feds will come in and then bob will get arrested for human trafficking…

[QUOTE=WesternChamp;18607842]pretty embarrassing for dunn to have to act that way. grown ass motherfcvkers with kids acting like that LOL. i would be ashamed of myself.[/QUOTE] these floyd boys look weak as hell but apparently they don't care man its sad...

[QUOTE=WesternChamp;18607883]i aint never wished death upon anyone or hope their plane dont crash. let that sink in brah. LOL. lets just hope lil t is at school and doesnt have to sit thru and see all this from his father.[/QUOTE]…