Pacquiao Busting Up His Team in Camp, Roach Says 'He's Back'

Eight division world champion Manny Pacquiao and Philippine senator and “Fighter of the Decade” is back to his old devastating punching machine.

ABS-CBN reporter Dyan Castillejo told BoxingScene.com/Manila Standard that Hall of Fame trainer Freddie Roach revealed “his left shoulder was hurting tremendously while Buboy Fernandez also complained that his elbow was hurting because of Manny’s punching power” after seven rounds on the punch-mitts.

Roach complemented Manny on his footwork during six rounds of sparring with Rey Beltran on Friday and said “Manny is exactly where we wanted him to be. 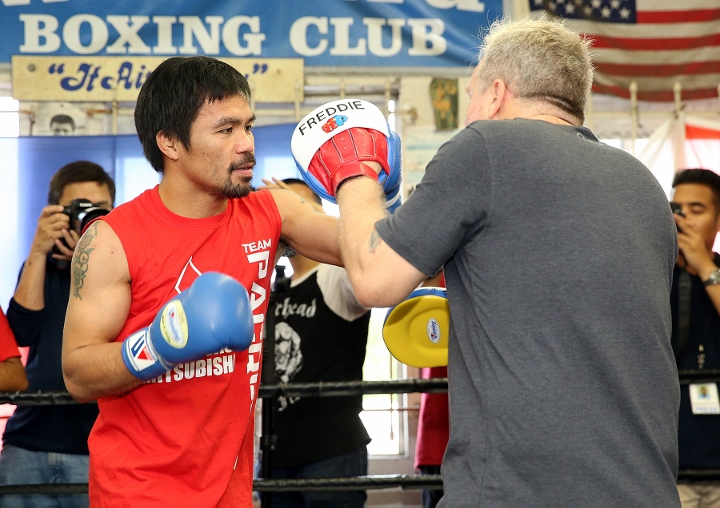 Roach further said Pacquiao has shown “amazing energy after nine to ten  hours of work in the Senate and then the gym and added, that he’s “really pleased, he was perfect.”

Pacquiao’s training team indicated “they can feel the old Manny is back and if Jessie Vargas comes forward” because he is a fighter, the 5’10 champion "will be in deep trouble.”

IN OTHER NEWS: TACOMA, Wash. – Ghana’s Thomas Awimbono will make his U.S. boxing debut on Nov. 19 when he faces fellow super middleweight Mike Gavronski in the main event of Battle at the Boat 108 at the Emerald Queen Casino in Tacoma, Wash.

It’s been nearly seven years since the 25-year-old Awimbono (25-4-1, 21 KOs) last tasted defeat. After losing by decision to undefeated Thomas Oosthuizen, who is currently ranked among the world’s top 10 light heavyweights, in a bout for the WBA Pan African super middleweight crown, Awimbono has been on a tear, winning 18 consecutive fights with 17 of those victories coming via knockout.

In 2002, Thomas Awimbono participated in the Commonwealth Games representing his home country of Ghana. Awimbono lost in the quarterfinals to Paul Smith by a very controversial 17-21 score that put the judges’ agenda in question.

Awimbono will face no slouch when he competes for the first time in the United States as Gavronski brings a stellar 21-2-1 record with 14 knockouts into the 10-round affair.

Wait....wasn't Hectari just saying yesterday that Pac looked slow and aged while he was getting his ass kicked by some bum off the streets in sparring? What's up with the differing accounts of Pac's skills?

BPP must have good fun writing these headlines knowing everyone is going to get trolled by Roach.

[QUOTE=Tobi.G;17158101]I think you are right.[/QUOTE] Yeah. I think Pac knows with all his tax issues and the costs of being in senate, he has to be tuned in for all his fights these days, in the hope of creating an…

[QUOTE=soul_survivor;17157118]Tbh, Pacquiao never went anywhere. He battered p4p Bradley pillar to post for 3 fights, he reconfigured Algieris face (taller, longer reach, younger) and he gave Mayweather a tough 4 rounds. The problem in that last fight was the shoulder…

Sure thing Freddie. He KO's him which round? Lol we know this gonna be a decision