If in fact the rubber match with Timothy Bradley Jr. was the final fight in the historic career of Manny Pacquiao, then he goes out with a whimper in relation to his once lofty box office appeal.

Pay-per-view tallies are still being tallied, but industry insiders suggest that the April 9 HBO PPV headliner from the MGM Grand in Las Vegas will be lucky to tip the 400,000 buy mark. Hall of Fame promoter Bob Arum is a bit more optimistic, although even his wide-ranging estimate of “between 400,000 and 500,000 buys” is still considered a box-office flop.

“It’s a disappointment, it’s terrible,” Arum admitted during a brief exchange with BoxingScene.com. “It’s certainly not the number we hoped for, but it is what it is.” 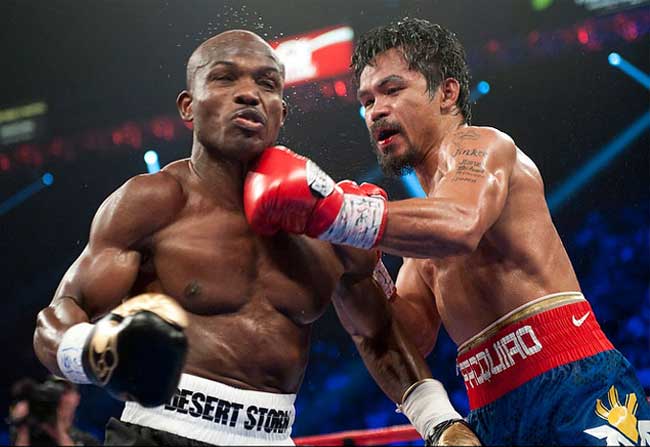 An announced crowd of 14,665 was reported for the fight, in which Pacquiao (58-6-2, 38KOs) scored two knockdowns en route to a convincing 12-round decision. The win also netted him the vacant World welterweight championship, a record-breaking fifth lineal crown to his massive title collection.

However, Nevada State Athletic Commission records show a paid attendance of just 13,046, with the rest presumably offered as complimentary tickets. The event produced a live gate of $6,411,584, the poorest performing Pacquiao-headlined event in Las Vegas since his June ’08 knockout win of David Diaz.

The first fight between the two – in which Bradley scored a widely disputed 12-round split decision win – sold roughly 900,000 PPV units, while pulling in a live gate of $8.963 million at the MGM Grand, which hosted all three fights. The latter amount is good for the 25th highest grossing gate of all time for boxing events in the state of Nevada – and in particular Las Vegas, regarded for decades as the boxing capital of the world.

Both marks were the best among the trilogy, with the units sold and live gate regressing with each passing fight.

The April ’14 rematch – in which Pacquiao reclaimed his welterweight belt with a clean unanimous decision - actually sold more tickets, with 14,099 in paid attendance, compared to 13,229 for the first fight in June ’12 – for a live gate of $7.865 million. The amount is #30 on the same list, and ranked ninth among Pacquiao’s best sellers in Las Vegas.

Number one, of course, was his losing effort to Floyd Mayweather last May in the highest-grossing boxing event of all time. It destroyed financial records across the board, as well as selling more PPV units (a stunning 4.6 million, ranging from $90-100 a pop) than any other boxing show in history.

The working theory is that the five-year build-up to Mayweather-Pacquiao helped – for a long stretch – drive up their marketability while their careers ran parallel. However, Mayweather’s popularity sans Pacquiao peaked with his Sept. ’13 win over Saul ‘Canelo’ Alvarez, which held industry financial records until the long-awaited Mayweather-Pacquiao super fight came along.

The industry as a whole seems to have since come to a grinding halt, with overall interest in the sport down considerably from where it was even a year ago. Pacquiao’s inflammatory anti-gay remarks certainly didn’t help the promotion – even if it did tap into the right voting base in his bid to become Senator in his native Philippines in the upcoming general election in May.

While such actions were a deterrent to the show – which featured a loaded Mexican-themed undercard – there is concern of industry-wide burnout as it pertains to premium boxing content.

“Floyd Mayweather couldn’t escape it either,” Arum points out. The reference is to what Mayweather insists was the final fight of his perfect career, a 12-round whitewash of faded former welterweight titlist Andre Berto last September, which performed miserably in the PPV market. Still, it managed to generate just north of $10 million in ticket sales, good for #21 on Nevada’s all-time list and #10 on Mayweather’s personal list of his highest-grossing events in Las Vegas.

Should the PPV tally prove to top out anywhere near the 500,000 mark, it will still serve as Pacquiao’s worst-performing stateside-based event again since the Diaz fight in June ’08. He truly crossed over from boxing star to renowned superstar one fight later, when he battered Oscar de la Hoya into retirement after eight viciously one-sided rounds in their Dec. ’08 clash.

The win came at a time when Mayweather was reportedly retired, although his competitive side prompted a comeback. His return was formally announced in May ’09, on the same day as Pacquiao’s two-round destruction of then-lineal 140-pound king Ricky Hatton in Las Vegas.

From there, the two emerged as the leading box-office draws, with a large part of it built on the belief that they would one day meet in the ring. Such feelings began to fade in 2012 – when Pacquiao suffered back-to-back losses to Bradley and Juan Manuel Marquez (in their epic fourth fight in Dec. ’12) and Mayweather did a brief prison stretch after pleading no lo contendre to domestic violence charges.

Upon his return in 2013, Mayweather would only have one other PPV not involving Pacquiao crack the one million mark – his win over Alvarez. PPV headliners versus Robert Guerrero, Marcos Maidana (twice) and Berto all fell short of expectations in relation to the lucrative six-fight deal signed with Showtime.

Pacquiao has fought just five times since 2012. Other than the Mayweather clash, his only other PPV headliner during that stretch to even crack 500,000 buys was the April ’14 rematch with Bradley. Wins over Brandon Rios and Chris Algieri took place in Macau, with PPV receipts proving out of sight means out of mind to the average boxing consumer.

The tallies for the tail end of the trilogy with Bradley suggest that boxing fans have long move past paying for recycled content – leaving Pacquiao’s storybook ending limited to his brilliant in-ring performance.

[QUOTE=Rath;16637088]what do you think about Pac vs Floyd rematch at 144? do you think Floyd will refuse that or his genius fans?[/QUOTE] I'm not sure what you mean, why would they do something like that ?

400-500 is perfectly fine for a fight NOBODY wanted to see (because the score was already 2-0) But if Khan/Saul look good against each other and win, I guarantee you Saint Bob is gonna make 1 more super fight that…

[QUOTE=aboutfkntime;16637004]Pac refused to rematch Cotto at 150, despite having already beaten him. The weight was a show-stopper, it totally killed the fight. You really think that they will go anywhere near Canelo ?[/QUOTE] what do you think about Pac vs…