With a two-city press tour planned for the April 9 rubber match between Manny Pacquiao and Timothy Bradley Jr., the undercard continues to take shape.

Among the supporting fights on the HBO Pay-Per-Event – which airs live from the MGM Grand in Las Vegas, Nevada – is a featherweight crossroads bout between unbeaten rising star Oscar Valdez and former champ Evgeny Gradovich. The bout was rumored throughout the week, but confirmed by Valdez’ team shortly after agreeing to all terms Friday morning.

“We are all excited. Oscar is very excited to be a part of a fight of this caliber and on a stage as big as Pacquiao vs. Bradley,” manager Frank Espinoza told BoxingScene.com on Friday, shortly after confirming to promoter Top Rank that they were on board for the fight. “Oscar is looking forward to fighting a former ex-champ and is really up to the challenge.” 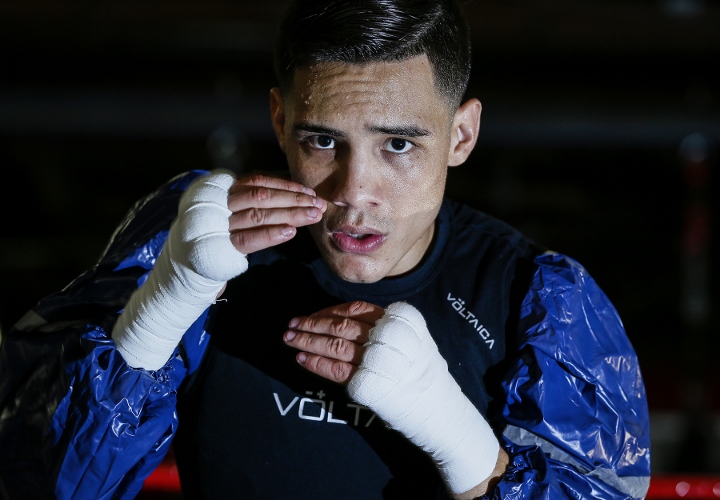 Valdez (18-0, 16KOs) – a two-time Olympian for his native Mexico – enjoyed a breakout campaign in 2015, posting four wins on the year, all of which were televised. The 25-year old boxer also made his HBO debut, scoring a 10-round decision over Ruben Tamayo in supporting capacity to Bradley’s welterweight-title winning effort over Jessie Vargas (no relation) last June.

Two knockout wins have followed, including a dominant showing in a 5th round stoppage of former title challenger Chris Avalos last September in Las Vegas.

Given his advancement after just three years in the pro ranks, it was decided by his team that his next fight needed to be one that will properly gauge whether he’s a work in progress or ready to advance from rising prospect to budding superstar.

“Oscar is one of our top young fighters and this is a perfect showcase for him,” Hall of Fame promoter Bob Arum told BoxingScene.com. “This is a fight and platform where people all over the world and PPV audience will be able to see him. He’s fighting a former world champion who only very recently lost his title - we have great confidence in the kid.”

Gradovich (21-1-1, 9KOs) reigned as a featherweight titlist for more than two years, making four successful defenses before conceding the crown in a technical decision loss to Lee Selby on the road last May in London, England.

The 29-year old boxer from Russia – who trains in Oxnard, California where he is affectionately known as ‘El Ruso Mexicano’ (‘The Mexican Russian’) – has rebounded to win his last two starts, including a 10-round decision over Jesus Galicia earlier this month in Spain. The bout was intended to determine whether or not he could compete one weight division lower at super bantamweight, but in weighing in at 128 lbs. decided that featherweight was the best fit.

With that came his instantly accepting terms earlier this week to face Valdez, whose side agreed to the fight after a brief meeting at the Top Rank office on Friday morning.

“This fight comes at the right time,” Espinoza believes of the crossroads matchup. “We have to face and beat a fighter of this caliber to move on to the next stage. We have aspirations of Oscar becoming a world champion by the end of the year. In order to get there, it’s imperative to prove himself against a fighter of Gradovich’s caliber – not only that, but prove he can handle a style like his.”

Those surrounding the unbeaten featherweight have no question of his potential.

“Oscar Valdez is one of three big stars we signed from the 2012 Olympics right around the same time,” Arum points out. “Valdez represented Mexico, while Jose Ramirez (who faces Manuel Perez on this very card) represented the United States and of course Felix Verdejo, the terrific young fighter from Puerto Rico (who fights in February on HBO).

“This is a great vehicle for Oscar to make that transition from where he is now to becoming one of the future stars of the sport.”
Valdez also appeared on the non-televised undercard of the second fight between Pacquiao and Bradley in April ’12, registering a 4th round knockout of Adrian Perez. Pacquiao scored a 12-round decision to regain the welterweight title he lost to Bradley in a controversial split decision in their first meet in June ’12.

[QUOTE=TNTSUGAR;16392687]I was first row in last Gradovich's outing here in Spain and he looked shot against Galicia. Easy fight to climb up for Valdez, good work by Top Rank.[/QUOTE] No reason he was having problem was because the fight was…

[QUOTE=LA_2_Vegas;16392701]Nice, now I hope the Zurdo-AA fight is on there. That would be a nice night for TR if both those prospects win[/QUOTE] I'd have to buy the PPV if that fight gets added.

Valdez gets KOs by accumulation of punches, he is not a big puncher. I would be surprised if he knocks out Gradovich.

Nice, now I hope the Zurdo-AA fight is on there. That would be a nice night for TR if both those prospects win