Adam Lopez suddenly has a much tougher fight Saturday night in Las Vegas.

BoxingScene.com has learned Lopez accepted Bob Arum’s offer Friday to fight Oscar Valdez on barely 24 hours’ notice because Valdez’s original opponent, Andres Gutierrez, came in an absurd 11 pounds overweight for their 10-round, 130-pound fight. Before accepting more money to face Valdez in the main event, Lopez met his contractual obligation by weighing in at 126 pounds for what was supposed to be a 10-round featherweight fight against Luis Coria on the Valdez-Gutierrez undercard.

Because Lopez agreed to move up a whole weight class to fight him, Valdez accepted a rehydration clause that’ll limit how much weight he can gain between Friday’s weigh-in and Saturday morning. 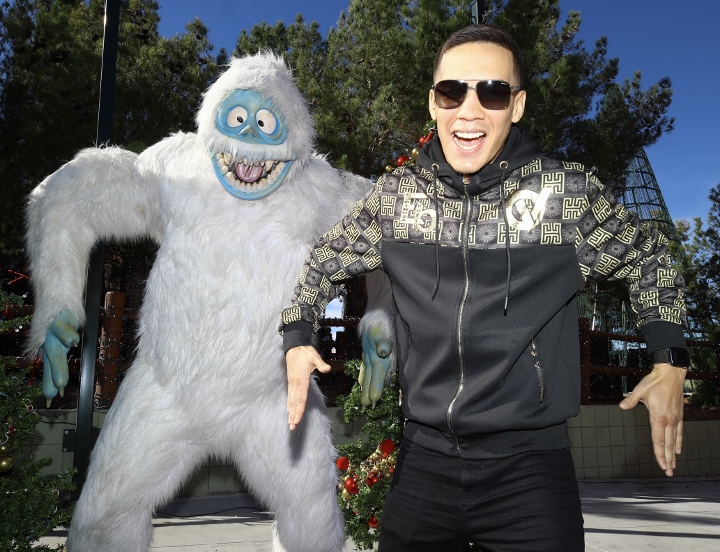 Arum – whose company, Top Rank Inc., is the promoter of Saturday’s show at The Cosmopolitan – cursed Gutierrez and ordered him off the stage Friday once he stepped on the Nevada State Athletic Commission’s scale at 141 pounds. Coria (12-2, 7 KOs), of Moreno, Valley, California, won’t fight Saturday night because was Lopez was elevated into the main event, but he’ll be paid the purse he was supposed to earn for opposing Lopez.

Mexico’s Valdez (26-0, 20 KOs) will make his debut as a full-fledged junior lightweight in his fight against Lopez (13-1, 6 KOs), of Glendale, California. Valdez vacated his WBO featherweight title following his last fight to move up from 126 pounds to 130.

The stream also will include a 10-round bout between Carl Frampton and Tyler McCreary. Northern Ireland’s Frampton (26-2, 15 KOs), a former featherweight and super bantamweight champion, will fight for the first time in nearly a year against McCreary (16-0-1, 7 KOs), of Toledo, Ohio.

Immediately preceding the Frampton-McCreary match, the Dominican Republic’s Carlos Adames (18-0, 14 KOs) will battle Brazil’s Patrick Teixeira (30-1, 22 KOs) in a 12-round fight for the WBO’s interim junior middleweight title. The winner between Adames, the WBO’s No. 1 contender at 154 pounds, and the second-ranked Teixeira likely will be elevated to world champion at the WBO’s annual convention next week in Tokyo because Jaime Munguia (34-0, 27 KOs) is expected to relinquish its 154-pound crown.

[QUOTE=Urtain;20221310]I'm thinking to put some money in Valdez to win by KO. The odds are pretty good.[/QUOTE] Are they? That's a decent bet

I'm thinking to put some money in Valdez to win by KO. The odds are pretty good.

[QUOTE=Idunnoshet;20219907]I agree. But I feel more for Lopez who officially made 126 lbs. and now has to fight a Valdez who weighed in 130 and has good power. Lopez is pretty good. But even Danny Roman dropped him and Roman…

That’s what happens with top rank and it’s mistmatches.

[QUOTE=indelible;20219728]Verbally he wouldn’t understand what the old man was saying but the body language was obvious. I still don’t like that they’re having Valdez fight Lopez since it’s such short notice and neither fighter has the time to prepare or…