Oscar Rivas Being Pursued By Top Rank and Eddie Hearn

Heavyweight contender Oscar Rivas (26-1, 18 KOs) continues to be a hot commodity, despite suffering his first career defeat back in July.

Rivas suffered a twelve round unanimous decision loss to Dillian Whyte in a WBC final eliminator. Whyte was down in the ninth round.

There was controversy in the aftermath of that bout, when it was revealed that Whyte had tested positive for two metabolites of a banned substance in an anti-doping test administered by UKAD in June. Rivas and his handlers were unaware of the positive test, and they had no knowledge that a confidential hearing took place on the morning of fight - where a panel allowed Whyte to move forward with the contest.

Whyte is still involved in a confidential legal process with UKAD. The WBC have suspended his mandatory status - until the situation with UKAD is resolved.

If Whyte is suspended by UKAD, Rivas and his handlers would likely petition the WBC for a mandatory title shot. 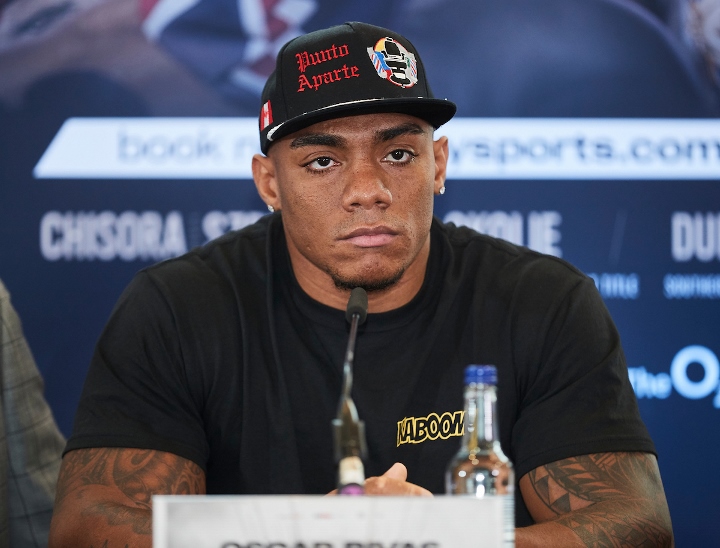 Top Rank Vice President Carl Moretti confirmed that a multi-fight deal has been presented to Rivas and his promoter, Yvon Michel. That multi-fight deal includes a future fight with undefeated Tyson Fury.

But Moretti is not alone in his chase.

Top Rank is aligned with ESPN, while Hearn has an exclusive deal with streaming service DAZN.

"I'm aware of Hearn's offer to Rivas. It's part of the boxing business. It's up to Oscar and his team to make their decision. If he decides not to take our offer [and go with Hearn], it will be more difficult to offer him a fight against Fury," Moretti confirmed to The Montreal Journal.

This week, Michel will travel to Cancún for the WBC convention with the boxer and the manager of Rivas, Stéphane Lépine. At the end of the week, they will make a decision on the direction of the heavyweight's career.

[QUOTE=PotentialToast;20143607]So in summary, you can't answer. And then try the look squirrel approach to deflect with Whyte's B sample which is 99.9% certain to be the same as the A sample and will have no bearimg on his case.[/QUOTE] I’ll…

[QUOTE=Squ□redCircle34;20143330]UKAD procedure? Fûçk me, you sound like Hearns’ publicist! If Rivas would’ve gotten injured or worse then I dare say you wouldn’t even have the audacity to utter those words! One man was enhanced to increase performance of damage to…

[QUOTE=PotentialToast;20140059]What claim could Rivas possibly have against Hearn. He followed the UKAD procedure and Whyte was cleared to fight ).[/QUOTE] UKAD procedure? Fûçk me, you sound like Hearns’ publicist! If Rivas would’ve gotten injured or worse then I dare say…

If Rivas signs with Hearn he's an idiot. He was culpable in trying to get Rivas f'ed up by Dillian Shyte