Luis Ortiz’s trainer Herman Caicedo revamped his 40-year-old fighter’s physique ahead of his fight against Deontay Wilder. The Cuban fighter came into the fight five pounds lighter, and was winning across all three scorecards before Wilder landed his equalizing and erasing right hand in the seventh round of their heavyweight rematch on Nov. 23.

Ortiz still plans on fighting, and although Caicedo has ceded the heavyweight thrown to Wilder, the same can’t be said for the rest of the division.

“No. Hell no. No other heavyweight in the division can beat Luis,” said Caicedo. “He takes a good shot. There is a reason people don’t fight him, and Deontay said it best. You have to do what Luis can do for 12 rounds, and be able to take a massive shot. It’s a hard combination to find.” 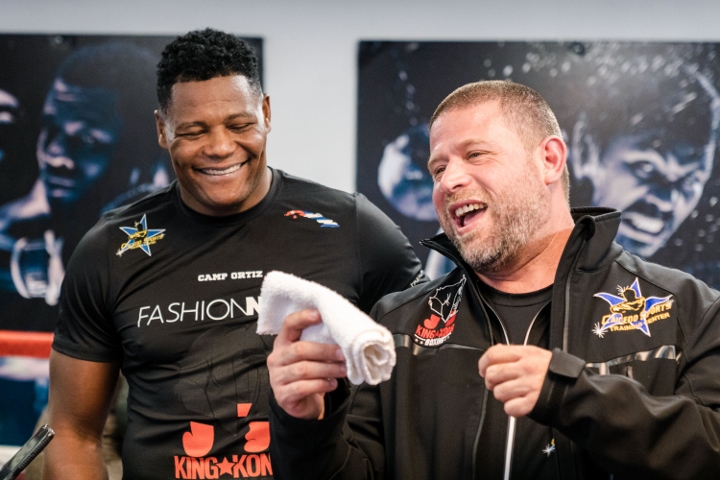 Although he lost, the future will look bright and ripe with opponents for Ortiz. The only thing he’ll have to fend off is Father Time while top-ten contenders such as Dillian Whyte, Alexander Povetkin, Joseph Parker, Kubrat Pulev and Adam Kownacki wait in the distance.

A fight with the undefeated Kownacki, who was an interested observer in attendance watching the Wilder-Ortiz fight at the MGM Grand in Las Vegas, would be an intriguing test for the Polish pugilist. Both fighters compete under the PBC umbrella, so coming to terms on a deal should not be too difficult.

Caicedo said Ortiz will fight anyone, but if he had a preference, he’d like to see Ortiz fight the loser of the Andy Ruiz and Anthony Joshua rematch, or Tyson Fury should the Brit hit the schneid in his rematch against Wilder.

“Luis has never said no to anybody. He picks up the phone and says ‘yes’ without knowing who the opponent is,” said Caicedo. “Deontay has the missile, and you can't do anything. Deontay Wilder is the best heavyweight on the planet, by far. He might even be the best heavyweight on the moon, if there is boxing on the moon. But Luis has now proved twice that he belongs.

“I’m without a doubt proud of Luis’ performance. It’s second to who he is as a person and how he treats people around him.”

[QUOTE=Ake-Dawg;20224587]Actually Jay Jimenez confirmed that they wanted the fight but that the promoter bungled the negotiation by asking for more money but not relaying to him or Ortiz what was happening. Both Jimenez and Ortiz are on record asking Hearn…

[QUOTE=kafkod;20224408]Ortiz did say no to fighting AJ. His own trainer and manager verified that. It isn't an opinion, it is a [B][I]fact.[/I][/B] Maye[B][I] you[/I][/B] can explain the correlation between the predicted results of a proposed fight between Ortiz and Whyte…

[QUOTE=Ake-Dawg;20223744]1. Ortiz never said no to Joshua. 2. Turning down a fight doesn't mean a fighter will lose or is afraid to lose. 3. You still made zero correlation between the predicted results of a proposed fight between Ortiz and…

[QUOTE=JRB123;20223596]You keep overlooking the fact that Ortiz made an agreement with the WBA to fight Vidondo for the interim title on the condition that he would fight Jennings then Ustinov. He fought Jennings then after that fought Tony Thompson. The…

[QUOTE=JRB123;20223596]You keep overlooking the fact that Ortiz made an agreement with the WBA to fight Vidondo for the interim title on the condition that he would fight Jennings then Ustinov. He fought Jennings then after that fought Tony Thompson. The…