Ortiz Excited For Homecoming on Back of Ramirez-Hooker Thriller

Vergil Ortiz Jr. found himself torn between loyalties in the title unification clash in the greater Dallas area. Local favorite Maurice Hooker was granted a hometown headliner in his unification clash with Jose Ramirez—Ortiz Jr. stablemate under the guidance of Robert Garcia—in a battle of unbeaten 140-pound titlists two weeks ago in nearby Arlington, Texas.

The night ended in disappointment for the home team, with Ramirez scoring a 6th round knockout to bring two titles back to the California Central Valley region. Still, fans were abuzz over the event and generated momentum which Ortiz hopes to carry over into his own homecoming headliner versus California’s Antonio Orozco at Verizon Theatre in Grand Prairie, Tex. (Saturday, DAZN, 9:00pm ET/8:00pm local time).

“It was amazing watching that fight,” Ortiz Jr. (13-0, 13KOs) admitted to BoxingScene.com of witnessing the event. “It opened up a lot of eyes out here. Our fans know where to tune in to watch us, but to be in attendance and be a part of that energy, it makes them want to see more.

“After a great fight like that, I’m really excited to come right behind them and come home to box in front of all my peers.” 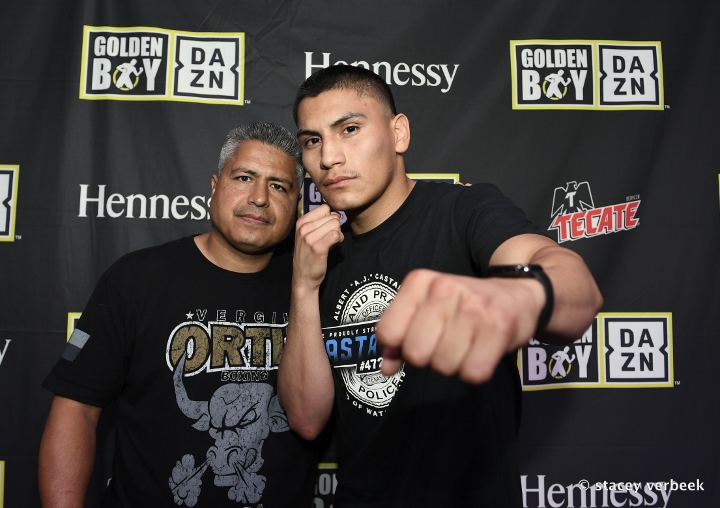 Saturday will mark just his fourth career fight in Texas and third in his home region. Any trip home is a welcome sight for the rising contender, whose training camps are spent at Garcia’s facility in California.

“It’s different out there, it’s alright but I love coming home,” admits Ortiz Jr., who doesn’t really get to enjoy the full West Coast experience while in training camp. “But I like boxing out there. There aren’t any distractions, you just focus on boxing.

"I have friends out there as well, but they’re all boxers too. So we really don’t do much but box and train. I spend the rest of my time just sitting around. This has been a treat spending fight week with all my people out here, all my fans.”

It’s a treat for the local public as well, as they get to witness up close and personal the next step in Ortiz’s meteoric rise to contention. The 22-year old is now campaigning in the welterweight division, taking a step up in class as well as weight in a showdown versus Orozco (28-1, 17KOs), whose lone loss came to Ramirez in their title fight last September.

Saturday’s winner will be in line to challenge for a major title, perhaps as soon as his next fight. In surging to the top, Ortiz provided a platform to turn a hometown showcase into a major event, while providing an opportunity for local talent to also shine.

“Years ago, when we were doing shows in Texas regularly, we signed all of these local kids,” notes Robert Diaz, executive matchmaker for Golden Boy Promotions, whom promotes Ortiz and Orozco. “Suddenly, we stopped doing cards out here, so we had to take these young fighters on the road.

“With Vergil now coming into his own as a star in the making, it gave us the chance to let him enjoy a big fight at home and also have these kids from Texas fight in front of their fans as well. It’s great for the area and for everyone’s development.”

It’d be even better if the show can produce similar thrills to what just hit town two weeks ago. With the headlining act proving to be a knockout every time out, the odds are in favor that everyone will go home happy.

“It will be a tough fight, but it’s a fight I’ve wanted for a while,” notes Ortiz Jr. “Honestly—and this is no disrespect to Antonio Orozco, who I know is coming to fight—but I felt like I was ready for him by my 5th or 6th pro fight.

“To get that chance at home and where a win will put me in line for a title, makes it worth the wait.”