Oleksandr Usyk To Return in Mid-May In U.S. As A Heavyweight

The Oleksandr Usyk tour is returning to the United States.

Following a 2018 campaign which saw the Ukrainian southpaw become undisputed cruiserweight king while winning three fights in three separate countries, the reigning Fighter of the Year is ready to test the heavyweight waters in the year ahead.

Alex Krassyuk, general director of K2 Promotions Ukraine met with Eddie Hearn—whose Matchroom Boxing entered a co-promotional deal with Usyk late last year—to discuss next steps for the pound-for-pound entrant. First up will be his testing the heavyweight waters, to determine if the weight is a good fit or if convincing enough to remain at cruiserweight.

“Most likely, the ring return of Oleksandr Usyk will take place in the heavyweight division on either May 18th or 25th in the USA,” Krassyuk announced through K2’s social media platform on Wednesday. 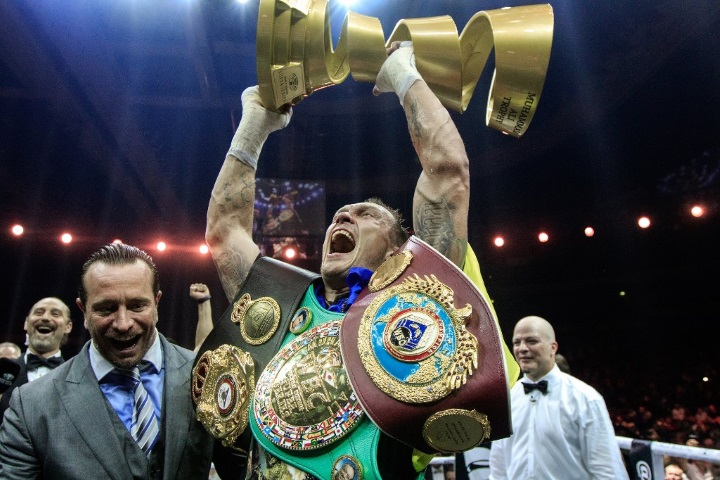 Much of the championship run for Usyk (16-0, 12KOs) has been one continuous road tour. The 2012 Olympic Gold medalist for his native Ukraine has fought largely in hostile territory for more than two years beginning with his title-winning effort over Krzysztof Glowacki in their Sept. ’16 battle in Poland.

His very first title defense—a 9th round stoppage of Thabiso Mchunu in Dec. ‘16—marked his stateside debut. The bout took place at The Forum in Inglewood, Calif.., the lone fight among his championship reign in which neither side could claim home nation advantage.

An April ’17 points win over American contender Michael Hunter in Oxon, Maryland marked the last time Usyk fought in the U.S., having since fought in four separate countries in as many fights.

The road tour began with a 10th round knockout of former cruiserweight champ Marco Huck, with their Sept. ’17 clash in Germany officially kicking off the cruiserweight portion of the World Boxing Super Series. Usyk would go on to run the tables, collecting three belts along the way in outpointing previously unbeaten titlists Mairis Brieidis in Latvia and Murat Gassiev in Russia.

For good measure, Usyk made it three road wins in 2018 following a rousing 8th round knockout of Tony Bellew. Their DAZN-streamed battle last November took place in front of a sold-out crowd in Manchester, England, also teasing the possibility that it could be his last as a cruiserweight.

Neither an opponent nor location have been offered for Usyk’s first fight of 2019, other than strongly suggesting it will mark his heavyweight debut. The 32-year old southpaw has only weighed in significantly above the 200-pound cruiserweight limit just once in his pro career, tipping the scales at 206 pounds in his second pro fight more than five years ago.

While likely not next, Usyk’s name is on the short list of candidates to potentially face unbeaten, unified heavyweight titlist Anthony Joshua in the new year. Among his collection of titles, Usyk has also earned the distinction of being named a Super Champion by the World Boxing Organization (WBO). With such honors, he can demand mandatory contender status in the heavyweight rankings any time he’s ready to pursue that title.

[QUOTE=SniXSniPe;19457910]How do you compare guys like that to Usyk? It's like you're not even trying. Has Usyk ever failed a drug test? Has Usyk ever had a ridiculous scorecard in his favor? Has Usyk ever claimed to better than all…

Povetkin and Ortiz are dangerous fights to start with.

He could probably tear through the WBO ranking....but I want Usyk-Povetkin. Ukraine > Russia

Breazeale, Ortiz, or Bryan the WBA interim champ. If not, bring Charr(WBA reg) or Pulev over. These are recognizable names and beatable opponents except maybe Ortiz. Perhaps, Joe Joyce should scrap the Stiverne fight and rematch Usyk.

I think the extra time was needed for Usyk to heal and rest and also to pack on muscle mass. Smart decision to not to rush it.