Unbeaten Ukrainian contender Oleg Malynovskyi is hoping to have a bright future ahead of him after finishing a bittersweet year in 2018.

The last time the 30-year-old featherweight faced an opponent in a real fight was in June last year, a fifth-round stoppage win over Colombia’s Wallington Orobio, and despite coming really close to a mandatory position with the World Boxing Organization, he, unfortunately, had to skip his promotion’s traditional year-ending boxing show with a rib injury suffered weeks before his bout in December.

Malynovskyi (23-0, 7 KOs), who is the reigning WBO European titleholder and one of Ukraine’s best-kept secrets in the sport, is in good hands as he shares a promotional company with boxing’s only current male undisputed world champion, Oleksandr Usyk in K2 Promotions Ukraine.

“Malina was training hard to have his WBO European title defense on December 22 but got injured his rib during sparring and had to pull out. That is a huge regret for us as this guy deserves a world title shot in 2019,” stated the Ukrainian fighter’s promoter, Alexander Krassyuk to BoxingScene.com. 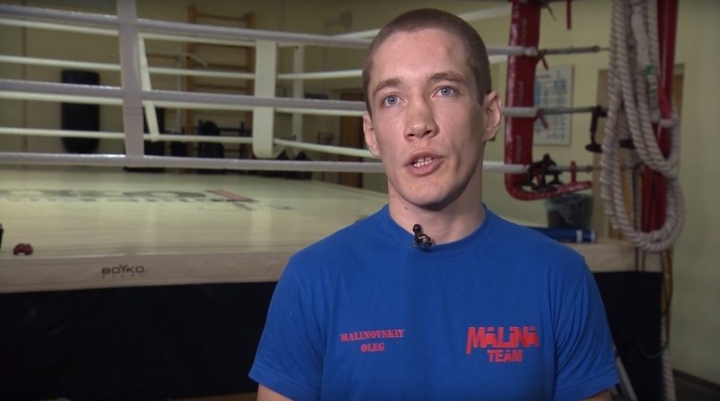 Though the injury prevented Malynovskyi from stepping to the ring in his hometown in Kiev late last year, the ease on the pain is a current No. 2 ranking position with the World Boxing Organization at the ever-exciting 126-pound division.

“Last year was more or less successful for me. Yes, I suffered a bad injury in December. However, I am glad to be rated that high with the WBO” said Malynovskyi through K2 Ukraine international coordinator and interpreter Yulia Diachenko to BoxingScene.com.

The champion on target is fellow unbeaten Oscar Valdez who is planning a return to the ring this coming weekend following a decision win alongside a badly fractured jaw in an all-out war against former belt holder Scott Quigg last March. The Mexican Valdez (24-0, 19 KOs) is taking on fringe contender Carmine Tommasone on Saturday in Frisco, Texas in a show promoted by Top Rank.

According to Krassyuk, his boxer has been visualizing a fight against Valdez for a long time, and the Ukrainian team is doing their best to put that matchup together soon.

“Oleg is a nice person, a hard worker, and a great fighter. He has been dreaming of fighting Valdez since the first time he fought for the WBO European title [in April 2016]. He is rated No. 2 now and we will put our efforts to push him to the mandatory position this year.”

To the question, if he feels ready to challenge Valdez in the foreseeable future, Malynovskyi made clear a contender has to be ready mentally any given moment and thus it is only about getting prepared physically in the gym.

“You can go and ask every single fighter rated in the top 15 by any organization if they think they are ready to take on the champion and the answer you get will always be yes. I let my promoter come to an agreement with Valdez and the day he comes to me with the great news we have the fight, I will run to the gym and get myself well-prepared physically as well.”

The Ukrainian fighter said he is “almost 100% healthy” and will get back into the gym soon. According to Krassyuk, Malynovskyi’s upcoming fight is scheduled for April 20th, the next of K2 Ukraine’s regular shows that takes place at the Kyiv Palace of Sports in the capital of the country.

There is yet too soon to know anything about Malynovskyi’s opponent at the mentioned event, but the most important thing at this point is to finally get back into the ring and let an unfortunate 2018 be left behind by a new year that brings the potential of bigger and better things.