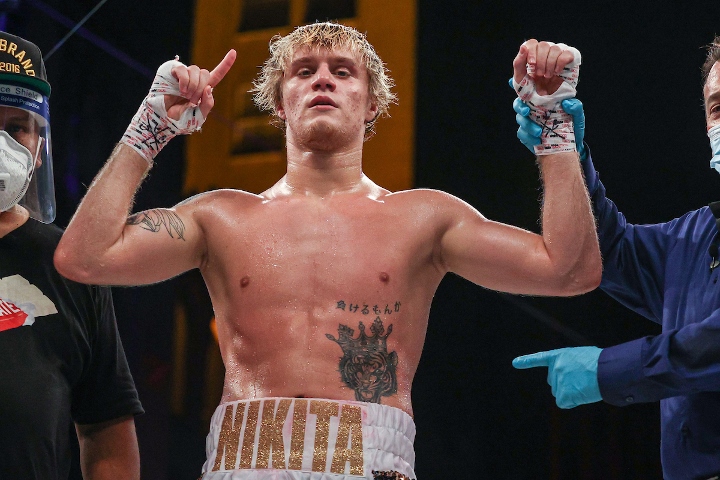 Maddox landed a right hand about 20 seconds into the sixth round. Ababiy and Maddox, though both tired, traded punches for the remainder of their six-rounder.

Maddox drilled Ababiy with a short, left hand inside at the halfway point of the fifth round. Maddox then landed a sweeping right hand with just under 45 seconds to go in the fifth.

Ababiy landed an extremely low blow 30 seconds into the fourth round, which caused a brief break in the action. Gentile warned Ababiy for fouling Maddox.

Maddox and Ababiy traded flush right hands later in the fourth round.

Maddox seemed fatigued in the third round, when Ababiy was much more active and accurate.

Ababiy belted Maddox with a right hand 40 seconds into the second round. Maddox and Ababiy traded hard body shots during the middle minute of the second round, although Ababiy took control of that round by landing several flush right hands up top in the final minute of it.

Ababiy and Maddox traded jabs for much of the opening minute of their fight. Ababiy landed a short, left hand with just under a minute to go in the first round, but Maddox connected with two right hands soon thereafter that bloodied Ababiy’s nose.

Abiby doesn't look terribly impressive. Unless he vastly improves, he's pretty close to his ceiling. He fought a journeyman a couple fights ago and was getting lit up with clean shots, I thought he might get stopped. I really havent…

He's been struggling with club fighters this early not a good sign but seriously how did the commission let him fight with his hair blocking his field of vision **** was stupid.

[QUOTE=BIGPOPPAPUMP;20912372] Nikita Ababiy Beats Brandon Maddox By Unanimous Decision In 6-Rounder[/QUOTE] Yeah but he sure didn't look like any kind of potential world beater doing it. His opponent gassed after 2 rounds and he still couldn't put him away. White…

he doesnt have a power and size to match up with the modern middleweights, compare Pirog-Jacobs from 10 years ago with Jacobs from GGG fight, Charlo or Andrade of today, they are huge and they will annihilate white choco