The World heavyweight unification clash between Anthony Joshua MBE and Joseph Parker will be broadcast live and exclusively on DAZN in multiple markets next month. The contest between the two champions will be aired live from Principality Stadium in Cardiff on Saturday March 31 in Germany, Austria and Canada.

The fight will be only the second time in boxing history where two undefeated heavyweight champions compete in a unification bout. British fighter Joshua, the IBF, IBO and WBA World Champion, who has won all 20 of his professional fights by knockout will face New Zealand star Parker, the WBO belt holder, who’s achieved 18 knockouts in his 24 wins to date.

In partnership with Matchroom Boxing and Duco Events, DAZN will exclusively showcase all the action in the run up to the big night, including the must see weigh in and press conferences between the two fighters. DAZN will also broadcast behind the scenes footage and an archive of previous fights.

John Gleasure, Chief Commercial Officer, DAZN commented: "We are thrilled to be featuring two of the best fighters in the world in what looks set to be an epic battle; and DAZN fans get to watch it at no extra cost. Unlike other broadcasters, DAZN doesn’t charge a premium for box office events. This fight is another example of our commitment to make sport more affordable and accessible than ever before. On DAZN you get the biggest and best sporting events, for one simple, affordable price.”

Eddie Hearn, Group Managing Director at Matchroom Sport added: ““This is a history making fight - a breathtaking heavyweight unification between two young, fearless, undefeated Champions and through this partnership we are delighted that more boxing fans in Germany, Austria, Switzerland and Canada will be able to witness this special night.” 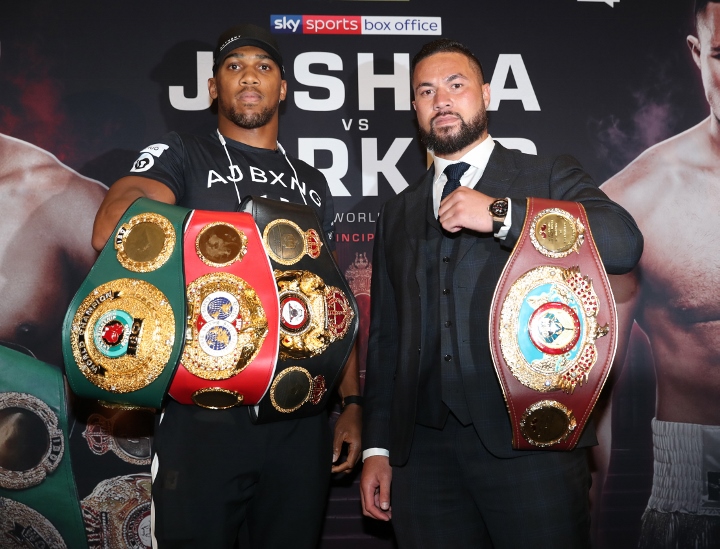 Salamov (20-1, 15 KOs) hails from Alkhan-Kala, Russia, but is currently in Detroit training at the legendary Kronk Gym with Javan SugarHill Steward.

"Umar is a tall, rangy light heavyweight with crafty footwork and an arsenal of punches," said Steward. "Being that Umar is only 23 years of age, his natural athleticism and creativity in the ring makes me excited to teach him that Kronk magic, which will make him a force in the strong light heavyweight division."

"I have relocated my training base to Detroit and look forward to a big year," said Salamov. "My goal this year is to become a mandatory challenger for a world title in one of the four sanctioning bodies and fight for a world title."

The 23-year-old slugger has already amassed quite a collection of championships as professional. He is the former IBO Youth and World Light Heavyweight, WBO Youth World, European and International, and the IBF East/West Europe Light Heavyweight Champion.

"Umar is one of the best light Heavyweights in the world," said Dmitriy Salita. "It's a division that is packed with lots of very good fighters and big names. I believe Umar has the skills and the experience to be the best. He is only 23 years old and has lots of world-class experience on the elite level in the amateurs and the pros. Now with him training in Detroit, his skills and experience will go to new levels."

Salamov says the decision to sign wit Salita was an easy one to make. "Dmitriy has a very good reputation and has done great work with the fighters he has worked with. He is very serious and responsible in his work. I have high hopes!"

Many of New England's best and brightest professional boxers will be in action Saturday night, April 7, as Granite Chin Promotions returns to the Granite State, presenting "Fight Night at the Zone," at The Sports Zone in Derry, New Hampshire.

"Granite Chin is excited to be back in New Hampshire," co-promoter Chuck Shearns said. "The town of Derry and the local businesses have already started to support the event. We are looking forward to having professional boxing in the area. Some of the fighters on the show gave us some great fights last time around and we certainly expect more on this show."

New England cruiserweight champion Chris Traietti, an Irag War veteran from Quincy, MA, will headline the event in a non-title, eight-round co-featured event. Traietti is also the co-promoter of "Fight Night at The Zone."

Chris Traietti is fighting and co-promoting Apr. 7 in Derry, NH

All opponents will soon be determined. All fights and fighters are subject to change.

Parker looks like Odd Jobs from the Goldfinger Bond Flick...