BANTAMWEIGHT PRODIGY Dennis ‘The Menace’ McCann has bemoaned the lack of fighting spirit amongst his fellow British Bantamweights, saying ‘They don’t want it, do they?’

At a press conference earlier this week, Hall-of-Fame promoter Frank Warren referred to McCann as one of the “best young talents” that he’d seen in “many, many years”  and said that Dennis had “the potential to be one of the outstanding British fighters of his generation.”

That message has clearly resonated with the British Bantamweight division as, according to McCann, not one of them was in a hurry to take the fight.

“We went down through the whole of BoxRec and we said ‘we’ll get him’ and we’d ring them up and it was no good,” he said. “Literally, we went through fifteen opponents with good records. All good kids... fought for good titles and they all turned it down.”

“Every single one of them.”

McCann is only six fights into his young career, but with four decisive finishes to his name has already earned comparisons to the great Prince Naseem Hamed.

Similar to Naz, who Warren also guided to the top of the boxing world, the young man from Kent’s confidence knows no bounds. However, he has insisted that he is “not the next Naz” and that he is “the first Dennis McCann.”

With that confidence, plus an abundance of scintillating speed and crushing power, this Maidstone mauler is considered by many to be a future world champion at his weight class.

But for Dennis? That’s simply not enough.

“I want a couple of world titles at a couple of weights, then I’ll be happy. When I’m training I picture those titles in my head.

“I left school at ten years of age... I knew I was destined to box.”

McCann boasts a boxing intellect that is mature beyond his years and is fully aware that promoter Frank Warren houses British and Commonwealth Champion within his Queensberry stable.

With his limitless ambition, it would only make sense that Dennis already has at least one eye on Foster's titles.

Whilst he is respectful of Brad’s ability, ‘The Menace’ is clear that a future bout is a very real possibility.

“That could definitely be a potential match-up down the line.”

Before that though, Dennis must take care of business live on BT Sport this Saturday night where his opponent will be tough, battle-hardened veteran Brett Fidoe.

In over 80 professional bouts Fidoe has only been stopped once, in 2016 against Andrew Selby, and has been christened by Steve Bunce as “the best journeyman in Britain.”

As tough a test as it might prove to be, Dennis sees only one outcome now that someone finally agreed to fight him.

“I cannot wait… i’ll steal the show as usual” 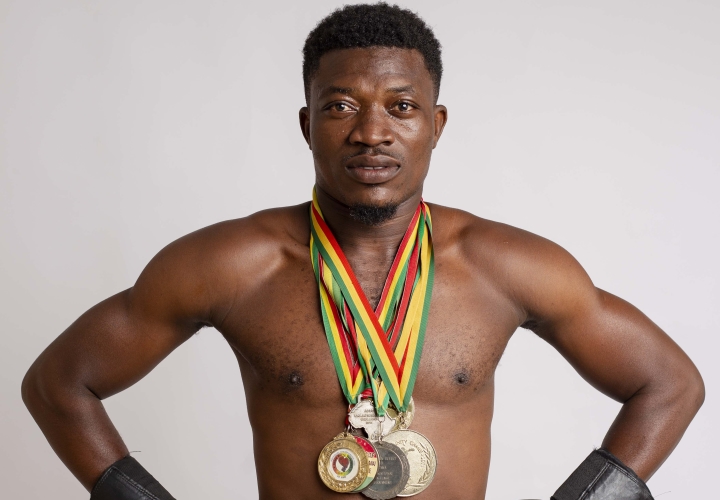 “I’m very excited to start working with Peter Kahn and his Team for the best of my future. It’s an honor to represent Ghana in the 2021 Olympics and after that Peter will direct my professional career towards my dream of becoming a world champion like my Uncle Ike,” said the 23-year-old Quartey who has compiled an amateur record of 89-5 and competes in the 152lb. division.

Said Peter Kahn, “Joshua is a very accomplished amateur boxer and has all the attributes to succeed at the 2021 Olympics and then as a professional. Coming from the boxing rich country of Ghana and with world championship boxing pedigree in his family, I’m certain that he will work hard towards attaining his goal of becoming a world champion.”

“Joshua’s a heavy handed, strong fighter which portends well for success as a professional and I’m thrilled to add him to the Fight Game Advisors Team of Future World Champions.”

Ike Quartey held the WBA Welterweight World Title from 1994 to 1998 and was undefeated for his first eleven years as a professional before losing a hotly-contested split decision to Oscar De La Hoya in 1999.

Las Vegas, Nevada - Last year Sugar Boxing signed undefeated super featherweight prospect Misael Lopez to a multi-year managerial contract. As part of the agreement the Denver resident received a signing bonus and was relocated along with his family to Las Vegas, Nevada.

He made his Sugar Boxing debut on a Premier Boxing Champions card in Texas last October. He would end up winning a unanimous decision over Nestor Robledo but the decision was overturned to a no contest when Lopez tested positive for marijuana.

Lopez, is 24 years old, is rumored to be making an attempt to break away from his management.

"He is problematic.  We have offered him multiple good fights on PBC cards and he hasn't taken any of them. We got him a fight last year and paid for his opponent and then he tested positive for smoking weed so all that money went down the drain," said a Sugar Boxing representative.

Sugar Boxing, claiming a valid contract, is threatening litigation if a third party attempts to sign Lopez.  They are hoping to reconcile with the young fighter and get his career back on track.

"We have this kid 100% under contract.  We gave him a signing bonus and moved him out here and have invested several thousands of dollars in him. Now I hear through the grapevine that some other people are talking to him.  Anyone who interferes with our contract will be sued to the full extent of the law," said the representative.

The broadcast team has been named for Salita Promotions’ “DETROIT BRAWL AT THE LEGENDARY KRONK” event at Detroit’s Kronk Gym on Thursday, August 20, 2020, and livestreamed exclusively on UFC FIGHT PASS® (7pm ET/4pm PT).

For more than a decade, Ray Flores has been a play-by-play man and/ or ring announcer for some of the largest mixed martial arts and boxing organizations worldwide including Premier Boxing Champions, TGB Promotions, Mayweather Promotions, Banner Promotions, World Boxing Super Series, Warriors Boxing, Golden Boy Promotions and many more.

In 2017, Ray was the in-arena host for the Mayweather/McGregor world press tour seen all over the world. Over the past several years, Flores has been featured ring announcing on networks such as Fox, NBC, ESPN, CBS, NBCSN, PPV, FS1, MSG, Setanta Sports, SKY Sports, BoxNation, the Active Channel, AXS TV, Galavision, Telefutura, as well as doing play-by-play work on FS1, and Comcast SportsNet Chicago. Ray also spent five years as a sports anchor for ESPN Radio Chicago.

“It will be an honor to call the action from the legendary Kronk Boxing gym in Detroit,” said Flores. “It’s not easy putting on events during this time, but Salita Promotions has put together a terrific card and are taking all the necessary precautions to keep us safe. Expect an entertaining night of boxing from the Motor City on August 20.”

"I'm beyond excited to get back to calling fights after six months,” said Erdman. “Anyone who knows me knows my attachment to the city of Detroit, so it's a particular honor for me to be broadcasting fights happening at the historic Kronk Gym. I like to think we have some innovative and interesting things in store for the boxing fans at home as we all continue to adapt to a totally new era of broadcasting."

During his impressive career, two-time former IBF Junior Middleweight Champion Cornelius "K9" Bundrage (36-6, 20 KO's) has shared the ring with seven former world champions. Bundrage was also a competitor on ESPN's "The Contender" Season 2 boxing reality television show in 2006 with Hall of fame host Sugar Ray Leonard and Sylvester Stallone and was named "fan favorite" out of sixteen boxers from all over the United States. Outside the ring Detroit native Bundrage is a motivational speaker and mentor.

“This is a very exciting time for the city of Detroit,” said Bundrage, “bringing boxing back to where it all started at the legendary Kronk gym. Emanuel would be proud. I take my hat off to everyone involved in making this fight happen. You can’t imagine how excited I am to be part of this. In the words of Shannon Briggs ‘Let’s Go Champ!’”

Mark Taffet, President of Mark Taffet Media, will be Executive Producer of the telecast and consultant on the event. Taffet brings his extensive boxing event and business experience to the Salita Promotions/UFC Fight Pass effort.

“For the UFC Fight Pass viewers, we intend to provide an entertaining, fast-paced seven fight card which will include talent in two locations and some intense live corner and locker room interviews at the most dramatic moments of a boxing event,” said Taffet.

“I am honored to be working with an all-star cast headlined by one of the long-time leaders of the boxing business in Mark Taffet with some of the world’s best broadcasters,” said event promoter Dmitriy Salita. “Although we are all going through a challenging time, we wanted to give the boxing community a special show from the legendary Kronk Gym in Detroit.”

Opening up the action will be a middleweight four-rounder featuring Detroit’s Marlon Harrington (1-0, 1 KO) looking to spoil the pro debut of San Antonio’s Ricardo Medina.