Former world title challenger and WBC #8 bantamweight Alejandro “Peque” Santiago says despite the challenges of training in a pandemic, he is more than ready to continue his campaign to finally claim a world championship.

A professional underdog, Santiago (21-2-5, 11 KOs) has no less than five controversial draws on his record, including one in a challenge for IBF Super Flyweight World Champion Jerwin Ancajas’ belt in 2018.

24-year-old Santiago has made a career out of surprising his favored opponents in their backyards. First battling to a 10-round draw with then undefeated Antonio Nieves for the NABO Championship on ShoBox: The New Generation. Next came two controversial draws against highly touted Puerto Rican Jose Martinez in Martinez’s backyard of Puerto Rico, the second for the NABO Super Flyweight Championship. Then came his highest profile draw in September 2018, this time against Jerwin Ancajas, where one judge scored the fight 118-111 for Santiago.

Anything changed from your usual training camps because of Covid?

Many things changed for this camp. Our gym closed, so it was a bit difficult to find sparring, however, just like in a fight we made adjustments and adapted. That is what champions do.

What do you know about your opponent?

I know that he is tough and comes to fight. He will be very well prepared to face me on September 21.

Are you a bantamweight now or would you go back down to super flyweight?
I feel that I’ve waited long enough for any of the champions at 115 to face me. I felt strong during my last fight at bantamweight, but if the right opportunity presents itself, I can move back down to 115 lbs.

You’ve had a lot of controversial outcomes in your career. What do you think your professional record should be?

I feel like all five of the draws on my record should have been wins. I should be 26-2 and a world champion.

Why do you think you are not getting close decisions?

Because I have been the ‘B’ side for all of them. Complaining doesn't do any good though, so I am working very hard to apply to be a lot more aggressive and win rounds without any doubt.
Does it feel good to be fighting at home?

It’s always good to fight in Tijuana. But I also love the challenge of fighting outside my comfort zone. It motivates me.

What are your goals for the next year?

My goal is to fight for the world championship again and win it this time.

Also scheduled for action that night is a fantastic early crossroads fight between up-and-coming Mexican prospects as the ever-improving Cristian “Lacandonsito” Cruz (12-5, 6 KOs), the son of former IBO and IBF Featherweight Champion Cristóbal “Lacandón” Cruz, will face once-beaten Diego “FlaKO” Aleman (12-1-1, 8 KOs) in an eight-round super featherweight war. This fight, between all-action battlers, has potential “Fight of the Night” written all over it.

On September 20th, the city of Dnipro, Ukraine will be the host of an exciting boxing show. Three aspiring athletes from German promotion EC Boxing will be a part of this event. Ukrainian heavyweight Victor Faust is taking center stage, fighting in front of his home crowd. He’ll be joined by fellow big man Ali Eren Demirezen and young 140 pound sensation Volkan Gokcek, who are all willing to take the next step in their careers.

Faust will be challenging Gabriel Enguema from Spain, who just like him is over 6’5’’ and has shown a sturdy chin in the past. This fight is a step up for Faust after two rather easy wins to start off his professional career. The 28-year old held his training camp in Istanbul, where he worked alongside teammates Demirezen and Gökcek. Therefore Faust will be prepared for what’s to come.

Demirezen, who sparred Faust for this fight, has already reached for the stars when he took on Nigerian Efe Ajagba in summer of 2019. Despite falling short on the scorecards, Demirezen is showing ambition to climb to the top of the heavyweight division. In Dnipro he will take on dangerous Kamil Sokolowski from Poland. Demirezen knows that he might be only one win away from getting another shot at a top contender, since promoter Erol Ceylan from EC Boxing is known for arranging big fights for his clients.

Also returning to the ring that night is up and coming super lightweight Volkan Gokcek. The technically sound fighter from Istanbul will fight unbeaten Ukrainian Ruslan Belinskyi.

"These are all decent tests for our fighters. We are looking to keep them active and lead them to the top. In due time they will all challenge for big titles," Erol Ceylan states. 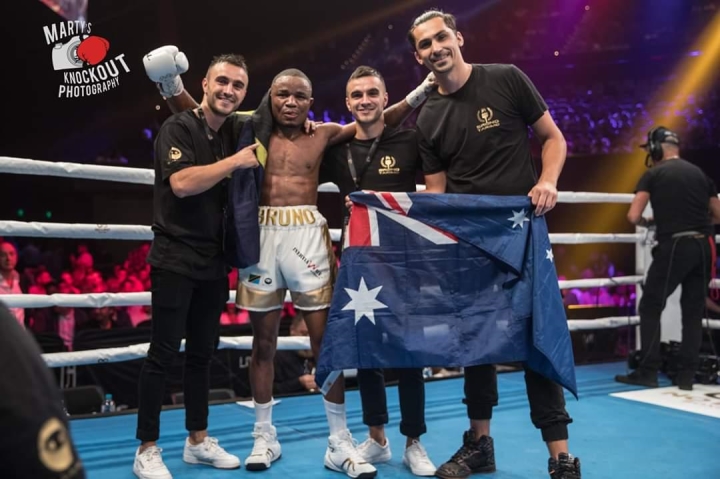 Plans are in the works for IBF world rated super featherweight Bruno “The Tanzanian Terminator” Tarimo to defend his IBF International 130lb. crown against undefeated Australian Olympian Paul Fleming in October in Australia. Also on the line will be the WBA Oceania super featherweight interim-Oceania title.

“We are working on that fight with all terms agreed upon except location,” said Tony Tolj, who is Tarimo's manager. “It would be a great fight for Australian boxing.”

The fight promoter will be up start Dream Time Promotions & the fight's location is still up in the air at this point due to the ongoing pandemic. It was originally slated to take place in Sydney but recent restrictions the fight has been forced to be relocated with Brisbane and Canberra as the leading candidates.

Tarimo (25-2, 5 KOs), 25, who signed with Tolj 18 months ago and has been on a hot streak coming off the back of a WBA Oceania title defeat. Tarimo has remained undefeated in 4 fights from 4 starts in enemy territory, defeating Olympian Joel Brunker, IBF International champion Serif Gurdijelac, world rated Nathaniel May.

Tarimo opened about about the fight.

“I fight for my family and for my people of Tanzania and thank god for my blessings & all the opportunities I have got since I have been in Australia. I have improved so much under coach Tony Nobbs and my training partners Jason and Andrew Moloney, I just can’t wait to fight. I'm so happy to get back another opportunity at the WBA Oceania title ”

Fleming 26-0, a 12-year professional boxing veteran and former Olympian, has fought the who's who in the super featherweight division and after a 2-year sabbatical is looking to take Tarimo's world ranking. Fleming is not deterred by the location as “Showtime” is no stranger to travelling as he has fought all over the world in Hong Kong, Phillipines, Macao, America.