An announced date and location is normally confirmation of a boxing event’s status advancing from “planned” to “done deal.”

In the case of the anticipated heavyweight title fight rematch between Andy Ruiz Jr. and Anthony Joshua, it will still require word from both parties and an accompanying press conference to convince the masses that those plans are very much in place.

That, unfortunately did not take place on Monday.

What came instead was confirmation from event handlers that the fight will take place on Dec. 7 at a yet-to-be erected venue in Diriyah, Saudi Arabia as previously announced. 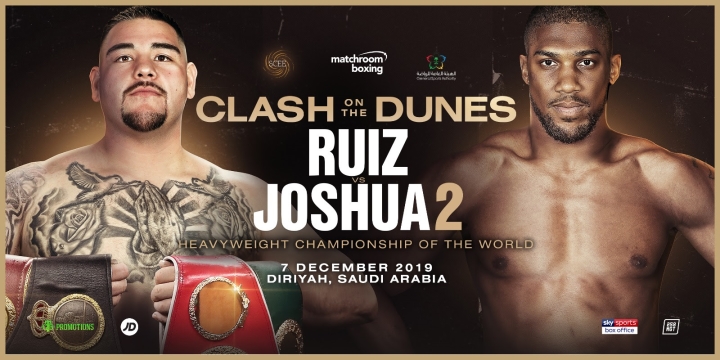 Hearn was joined on stage by event partner Omar Khalil, whose Skill Challenge Entertainment company is responsible for securing the location for the heavyweight sequel.

Neither Ruiz Jr. nor Joshua were on hand for the event, although neither were advertised to be on hand. However, California's Ruiz Jr. still has yet to publicly comment since Friday's reveal from Matchroom Boxing, which only escalated concerns that the fight still isn’t quite as official as is being sold.

The first fight was intended to serve as a night where Joshua would break through in the North American market. Already a renowned superstar throughout the United Kingdom, Joshua sought to elevate his brand in making his U.S. debut at New York City’s famed Madison Square Garden.

Everything ultimately went wrong with the night on his end, from original opponent Jarrell Miller testing positive for multiple banned substances, to replacement opponent Ruiz Jr. (33-1, 22KOs) climbing off the canvas to drop Joshua (22-1, 21KOs) four times en route to a 7th round knockout in one of the biggest upsets in heavyweight title fight history.

Joshua didn’t waste any time in exercising an immediate rematch clause in a contract which outlined both the guaranteed purse for Ruiz Jr. as well as full control on the side of Joshua and Matchroom to decide on where such an event takes place.

Two months and a lot of bickering later, it lands in the Middle East, far away from the general fan base of either participant.

“There was a lot of talk about where this fight would be held,” noted Hearn. “We had approaches from Saudi Arabia, from Dubai, from Qatar. We wanted to go somewhere in the sport of boxing that had a vision.

“I had the chance to be there for the World Boxing Super Series finals (between Hearn-promoted super middleweight titlist Callum Smith and exiting title claimant George Groves) last September in Jeddah. We already knew they were for real.”

The reported site fee for the event only confirmed how serious were the investors. A recent submission by JohnWallStreet.com noted a $50 million offer in place to bring the event to Saudi Arabia, more than enough to offset the massively reduced licensing fee that will be offered by DAZN, which carried the memorable first fight and will likely serve as the U.S. distributor for a rematch its brass hoped would land in the U.S.

On the other side, Joshua sought to return to his adoring fan base in the U.K., where has drawn more than 320,000 fans in attendance over the course of his last four in-region headliners.

Ruiz Jr. grew increasingly concerned over the guarantee of a level playing field in Joshua’s home base in recent weeks, a reaction which was unofficially met with what is being sold as a neutral location.

“There is another world out there besides Cardiff and Madison Square Garden,” Hearn points out. “We have an obligation to grow the sport outside of those region. This event could change the sport of boxing forever.”

The news has generated considerable buzz, for better or for worse. As it relates to public demand, the suggestion is that it’s so far translating into big business.

As for when Ruiz Jr. and Joshua will start talking, the boxing public will have to wait until the first week of September. The timeframe was offered as the kickoff point for a three-stop tour, with press conferences to be held in Saudi Arabia, London and New York City.

For now, all we are left with is as much as we learned three days ago—that the suggested done deal for the year’s most anticipated fight is still being planned.

My editing services are offered free of charge. I see at least two mistakes in this story.

[QUOTE=DaNeutral.;19982085]It was odd without the fighters, it just felt like a televised announcement. I wonder if it is a bit of a shove at team Ruiz for all their moaning and whining about what they are or are not prepared…

It was odd without the fighters, it just felt like a televised announcement. I wonder if it is a bit of a shove at team Ruiz for all their moaning and whining about what they are or are not prepared…

[QUOTE=larryxxx..;19982052]you mean Whyte??[/QUOTE] No. Years ago Frank Warren held a press conference for Chisora/Wilder. Problem was, the fight was never signed.

Felt like a Press Conference for Eddie's EGO :lol1: