It was a thought-provoking Saturday.

So naturally, as the main event of the Cinco de Mayo eve card unfolded in the Nevada desert, I was host to a typical wave of fight-night reactions, impressions and takeaways.

* Daniel Jacobs laid a gigantic egg when it came to backing up uncharacteristically tough weigh-in talk, retreating from a menacing “that mother***er right there, he gonna get it” lobbed in Canelo Alvarez’s direction on Friday to a flaccid “I need to go back and look at the tapes” a mere 24 hours or so later.

Though many would concede it was cosmetically close by the end, only the most charitable of arbiters is likely to find six rounds in your favor – let alone the seven it’d take to actually sway the verdict.

Full disclosure, I picked Jacobs going in and was looking for reasons to lean close rounds in his direction, but there was no reason for me to think he’d earned any more than four or five by night’s end – thanks to a strategy that, at least in the early rounds, seemed more hell-bent on passivity than punishment.

So next time, “Miracle Man,” maybe stick with the gracious prelude and save the venom for the ring.

* Meanwhile, speaking of Alvarez, when did I leave the room and suddenly six years passed?

Seems like only a couple of yesterdays since I was a mercenary name on the Showtime payroll, recruited by the boxing powers-that-be to serve as the network’s official blogger for the summertime press tour hyping a September match between a 22-year-old Canelo – he turned 23 between tour and fight – and a 36-year-old Floyd Mayweather Jr. 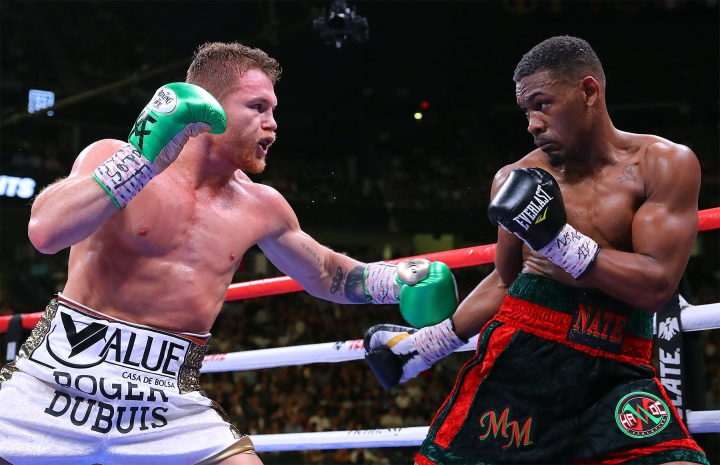 I logged thousands of miles on what felt like hundreds of flights while following the combatants on a continent-wide odyssey, starting on a Monday afternoon in Times Square and ending the following week on a Tuesday evening at Nokia Plaza in Los Angeles.

In between were eight other cities – Washington, D.C., Grand Rapids, Chicago, Atlanta, Miami, Mexico City, Houston and San Antonio – on an adventure actually that was actually cut one venue short when a scheduled Denver date was canceled after a tragically fatal wildfire.

The takeaway from each city, even back then, was that this Canelo kid was a star in the making.

The fans were on his side at nearly every venue, and he was remarkably no worse than 50/50 in Mayweather’s own hometown thanks to an enthusiastic immigrant population.

Ramiro Gonzalez, a publicist who was interpreting for Alvarez along the route, was not surprised.

“He’s established new records in Mexico that even surpass the national soccer team. He’s a crossover star,” he said. “And we know the U.S. is filled with a lot of Mexicans that support their team when they travel, so we knew they would come out for Canelo, too.”

I’d not have imagined, however, that the kid had this much competitive and popularity upside.

He’s without peer when it comes to pay-per-view gravitas in the post-Mayweather era, and the fact that he’s risen from the ashes of Money’s 36-minute clinic (in spite of C.J. Ross’s ridiculous math) to lay claim to middleweight supremacy is awfully impressive considering the hard road he traveled to get there.

Each of the 10 fighters he’s beaten (five by stoppage) since September 2013 has had an at least tangential claim to world-class status at one time or another, and the likes of Miguel Cotto and Gennady Golovkin, in particular, were legitimately top-of-the-ladder quality when Alvarez took them down.

And considering he’s still just 28, the nine remaining fights on the DAZN contract ought to provide a few more interesting bullet points for what’s already a Canastota-worthy plaque.

Now I wonder if I can still submit my travel receipts.

Fitzbitz says: Williams was on a roll heading into his first championship chance against Charlo, but he hasn’t been on that level since and is facing another powerful, momentum-fueled foe. Hurd in 8 (75/25)

Fitzbitz says: The African incumbent has been a champ three times, but he’s 38 and may be perfect for a PBC fighter looking to make a name for himself. Expect dethroning. Fulton by decision (65/35)

Fitzbitz says: These two got together for one of 2017’s best fights the first time, and it seems like Berchelt has moved forward since. It may not be as good, but he’ll win again. Berchelt in 10 (80/20)

Fitzbitz says: Dogboe was the flavor of the month prior to the first meeting, but he was ill-prepared and lost a clear decision. Hard to believe it’ll change much in the rematch. Navarrete by decision (70/30)