Munguia in Top Form, Confident of Taking Down Sadam Ali

With more than eight weeks of intense preparation, Mexican prospect Jaime Munguia finished his sparring sessions yesterday with the a twelve round test for his match on Saturday May 12 in Verona, New York against the WBO super welterweight world champion Sadam Ali.

Munguia did a 4 week preparation in his native Tijuana and the last four in Azusa, California with coach Robert Alcazar.

Munguía (28-0, 24 KO's) and Ali (26-1-0, 14 KO's) will clash in the main bout of the evening that Golden Boy Promotions, in association with Zanfer Promotions, will stage at the Turning Stone Resort & Casino from Verona, New York. HBO will broadcast in the United States and Azteca 7 for Mexico. 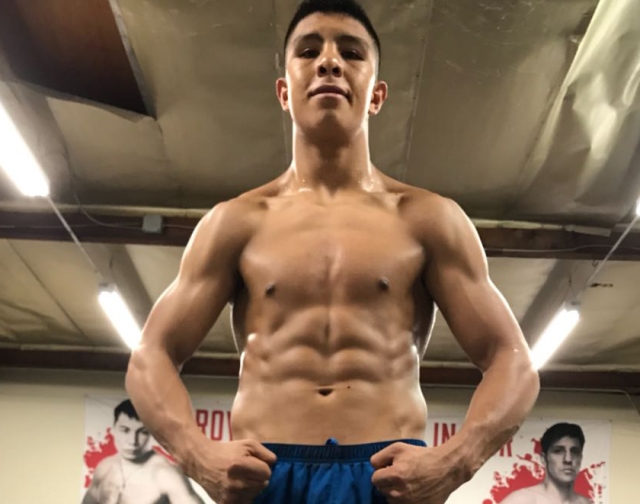 The Tijuana-born fighter, just 21 years old, will replace Liam "Beefy" Smith, who is the mandatory challenger and was scheduled to fight Ali - but he withdrew due to health complications.

Munguia was already training hard, as he was a frontrunner to become the Cinco De Mayo opponent for middleweight king Gennady Golovkin - and then he was scheduled to fight on the Golovkin vs. Martirosyan undercard.

His plans quickly changed after his given a good offer to fight Ali.

"I will arrive in perfect condition as I was going to fight on Saturday at the Golovkin show and I will bring a great game plan. I am very happy and motivated by this opportunity and with a lot of motivation to give another championship to Mexico, "said Munguia.

For this fight Munguía retained the services of experienced trainer Robert Alcazar, who has been in the corner of great fighters such as Oscar De La Hoya, Jessie Vargas, Edwin Valero, among others.

"I have meshed very well with Robert, I have learned a lot, I have always liked to work hard and he demands a lot from me, I am very happy, happy and satisfied with the preparation with my coach and I will show this in the fight," he said.

"I will be strong, explosive and arrive with an excellent physical condition. In the coming days I will continue with my routines of running and going to the gym, without sparring. We are on schedule with the weight and there won't be any problems. It will be great to join a group of great Mexican boxers who achieved glory at such a young age. On Saturday I will achieved my dream - without a doubt."

These Mexicans and their cherry picking.

[QUOTE=NORMNEALON;18744920]Locomex89 Why is the power edge with the late replacement??? Becusse he is bigger and has a bunch of kos vs cans ?? His promoters however are eager to get him in there with someone of note asap , so…

I feel like Ali's being undersold a bit itt, he pulled off a huge upset against Cotto and looked good at the weight. He won't come to lie down without a fight. That said, there's quite a bit of hype…

Should be interesting either way , this fight seems competitive on paper ,I would think ali should be the favorite , but would I be surprised if murguia won ?? Absolutely not . I know his record reads he is…