Mthalane, 38, of South Africa, who will be making the fourth defense of his second IBF flyweight world title reign, will return home to fight in his hometown of KwaZulu-Natal, Altamura said. 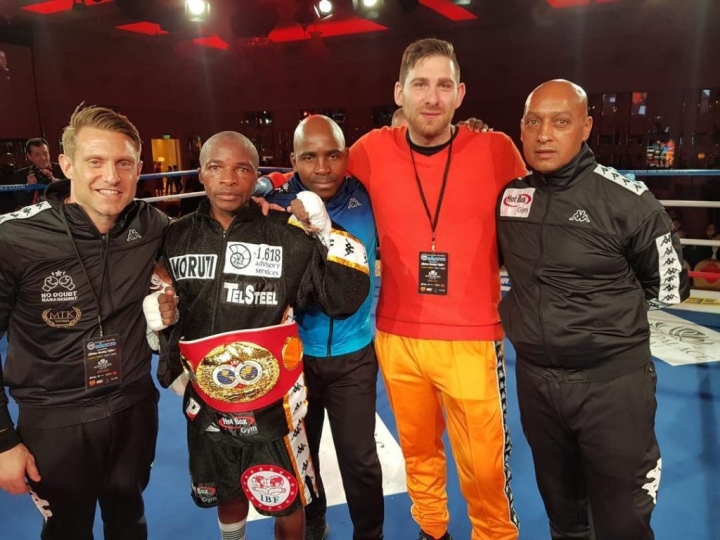 Mthalane (39-2, 26 KOs) has not boxed in South Africa for his previous four bouts dating to 2017 and has never had a pro fight in his hometown during his 20-year career while boxing in seven different countries: South Africa, the United States, Italy, Panama, Malaysia, China and Japan.

“It's exciting for Moruti to be showcased in South Africa for the first time in three years,” Altamura said. “He captured the title in Malaysia, and subsequently defended in Macau and twice in Japan, so it's a wonderful change to have no jetlag or travel adjustments to overcome for once.”

Mthalane claimed the vacant 112-pound belt by unanimous decision against Muhammad Waseem, despite getting knocked down, in Kuala Lumpur, Malaysia, in July 2018 on the undercard of the Manny Pacquiao-Lucas Matthysse fight.

He followed with a 10th-round knockout of Masahiro Sakamoto in Macau, China in December 2018 followed by back-to-back victories in Japan in 2019, a unanimous decision over Masayuki Kuroda in May and former world titlist Akira Yaegashi, the Japanese action star, in December.

Mthalane, who has not lost in 12 years -- since a sixth-round knockout to Nonito Donaire in a 2008 flyweight world title challenge at Mandalay Bay in Las Vegas – is excited to get back into the ring after so much uncertainty throughout the year because of the coronavirus pandemic.

“I’m back to the gym as I’ve started my preparations for my fight that will take place in December,” Mthalane said. “I’m over the moon as I get to this fight to make my fourth defense of my title. It’s been a difficult year because of this pandemic, Covid-19, so I’m very happy to get this opportunity to get back in the ring before the end of this year. I’m looking forward to the fight.

“I’ve started to watch videos of my opponent, Jayson Mama. He’s such a good boxer; he’s promising; he’s still young. But, no, there’s no way he will beat me. I will defend my title for the fourth time, for sure. It’s not like I’m taking him for granted but I’m training very hard to defend my title. I’m a champion. I need to keep this title. No one will take it from me. So, I’m looking forward to the fight. I’m back in the gym fulltime now. I’ve still got eight weeks left of training hard for my fight. I’ll it for sure. And still!”

Mthalane has beaten a number of notable opponents during his long career, including Hussein Hussein, Julio Cesar Miranda (to win his firs world title in 2009), Zolani Tete, John Riel Casimero and Yaegashi.

“Moruti is a pro's pro, hence why he's still an elite operator at 38 years old and 20 years since turning (pro),” Altamura said. “He's the most disciplined, focused individual I've ever encountered, and even throughout the uncertainty of the pandemic, has maintained optimal condition. He's an absolute joy to represent.

“We know Mama is a very talented, supercharged young lion, but Moruti is king of the jungle. And we anticipate another successful title defense."

Mama (15-0, 8 KOs), 23, of the Philippines, has been a pro since 2016 and will be taking a significant step up in opposition having not yet faced a name foe. Mama is coming off a third-round knockout of Reymark Taday, who dropped to 10-12-1 with the loss, on Feb. 29 in General Santos City, Philippines. The world title shot will be Mama’s first fight outside of Asia. All of his fights have been in the Philippines other than two in China.

Want to see Mthalane unify after this fight

Mama will be new champion. Pinoys kings of boxing.