Moloney Brothers Ready To Make Most Of Unlikely U.S. Journey

And—at least until after they both fight this week—please don’t tell the Australian government.

The secondary 115-pound title around the waist of Andrew Moloney along with the favorable bantamweight ranking enjoyed by twin brother Jason are the primary reasons why both get to live out their American dream this week. Rather than being stuck in Australia amidst the ongoing global coronavirus pandemic, they are now in prime position to make major statements in their respective talent-rich divisions.

“This is a huge opportunity that Top Rank has given,” Andrew Moloney (21-0, 14KOs) told BoxingScene.com of his WBA junior bantamweight title defense versus Joshua Franco, which takes place Tuesday evening at MGM Grand Conference Center in Las Vegas (ESPN, 8:00 p.m. ET/5:00 p.m. PT). “We are both headlining shows on ESPN. I’m making my headlining debut on ESPN here in my first fight in America.

“There’s going to be a lot of people watching on TV around the world. This is a big opportunity for us to really impress. We have to put on a good performance and introduce ourselves to a lot of new fans around the world.”

Andrew Moloney entered 2020 as an “interim” titlist forced to wait out the February 29 title clash between then-unbeaten WBA “Regular” 115-pound titlist Kal Yafai and former four-division champ Roman ‘Chocolatito’ Gonzalez. A perfect storm of events occurred soon thereafter, with Gonzalez claiming the crown with a 9th round stoppage win and then upgraded to “Super” champion by the WBA in early March.

The promotion enjoyed a trickle-down effect, with Moloney elevated from interim to regular titlist. At first glance from a casual observer, the distinction is enough to gain recognition as a world champion, even if boxing purists scoff at the suggestion.

However, it served as a key to remaining active at a time when the sport had all but shut down worldwide. 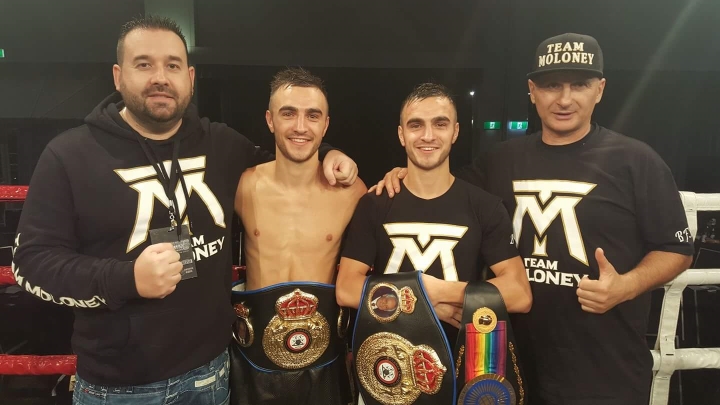 The Moloney twins were a little more than a month out from separately scheduled April bouts in the U.S. by the time the COVID-19 crisis began to wreak havoc on the boxing schedule. Andrew was due to make his stateside debut on an April 18 ESPN card in Miami, Oklahoma, which was to double as his first title defense.

Both cards were scrubbed along with every other Top Rank-promoted show scheduled between March 14 and early June. The first wave of cancellations came on March 12, knocking out back-to-back New York City shows planned by Top Rank, followed by a March 28 card in Canada. From there, April and May were quickly wiped out and with little sign of when things would resume.

“I just remember we were supposed to fight in April,” Jason Moloney recalls. “Both our fights got canceled. We did our best to train until everything went on lockdown and we couldn’t even go to the gym anymore. At that point, we weren’t sure what was going to happen.”

While Jason was forced to halt his pursuit of a world championship, Andrew was only in a slightly better place—in possession of a belt he wasn’t yet able to defend.

“I have to be honest,” Andrew Moloney admits. “We saw our fights and all those other shows getting canceled, and what was going on—I started to think that we weren’t going to fight at all this year, and maybe for a very long time. Nobody knew what this (disease) was, how to cure it.

“Even when (Hall of Fame promoter and Top Rank founder) Bob Arum started talking about doing fights in Las Vegas, we got excited at first. Then we thought about the travel restrictions, we figured there was no way that we were going to get over here. We didn’t know how long it would be until we could fight again here in Australia, either.”

While they were worrying, fortunately a key member of their team never stopped working to keep the dream alive.

Tony Tolj has expertly guided the careers of the Moloney twins, from developing prospects in their native Australia to preparing them for the world title stage. Throughout the journey has always come his going the extra mile as their manager to ensure greatness was within reach. It brought Jason to the World Boxing Super Series bantamweight tournament, coming up just short in a challenge of then unbeaten 118-pound titlist Emmanuel Rodriguez for what remains his lone career loss in their October 2018 clash in Orlando, Florida.

It wasn’t enough to deter Andrew from hitting the road for a title eliminator, traveling to Chile just five months later where he stopped local favorite Miguel Gonzalez in eight rounds. The win positioned him as the mandatory challenger to the title he now owns, which—along with Jason’s favorable ranking across the board (#4 at bantamweight with the WBC/ #4 IBF/#3 /#2 WBO)—was enough to entice Top Rank to take a chance and sign them both to multi-fight deals last May.

One year later, their favorable place in the sport was also enough to get their passports stamped to travel abroad at a time when few others in Australia could even leave their home.

“We were shocked that Tony pulled it off,” Andrew admits.

So, too, were those in charge of presenting the summer boxing series on ESPN.

“I had nothing to do with them getting over there, that was all [Tony],” Arum admitted earlier this month. “I don’t know how he did it, but one day we asked him if he could get them out here to fight on ESPN. The next thing I know, they’re at the Top Rank gym.”

If only it were that easy.

“There was a lot of paperwork to get filled out,” Tolj explained to BoxingScene.com. “We had to do that and we had to get documents from Top Rank. I had to go through my connections here as well. It was pretty intense but we got that over with. A lot of red tape to go through but we got it done.

“The whole reason was Andrew is the only world champion in our country. Jason is the number two contender (with the WBO). Otherwise, any other fighter in the country is limited to where in the world they can go.”

Even as they enter their most prominent platform to date, they still struggle to wrap their head around the journey leading to this point.

“He got us an exemption from the Australian government. We got the call,” notes Andrew Moloney of that moment in mid-May. “Tony told us, “Boys pack your stuff. We’re gonna leave tomorrow.” We were blown away.

“Here we are at a point where we’re fighting very soon when for a while it looked like we weren’t gonna fight for a long time.”

With wins this week, the sky is the limit as to how high they can fly in the 115- and 118-pound divisions, both of which have never been richer in talent or reward.

“First and foremost, I have to beat Baez,” insists Jason Moloney, who has won three straight—all in 2019—since his lone career defeat. “That will open the doors for bigger and better fights. The journey that led us here puts us in such a great position to make a statement. I don’t intend to let that go to waste.

“Everyone in the bantamweight division is in my sight, if I’m being honest. I want to be world champion and I’m prepared to fight everyone in the division. I’m ready to prove this is where I belong. I want to start winning world titles.”

As proven in the determining factor for their trip halfway around the world, winning those titles certainly matters far more than ever before.

At least they're not talking trash from 2000 miles away. You know, come get some, from the bed room, or neighborhood car park.

Timing is important in the sport of boxing, so is circumstances then you got who you surround yourself with and who maybe you keep away from Storyline is solid so far. That part of the mix is right there. Now…