Mikey Garcia wins his fourth divisional championship with his sharper power punching (46%-36%) that also produced the fight's only knockdown (an explosive counter left hook over a Lipinets uppercut in round seven) as well as a nice finishing kick that saw him outland Lipinets 43-27 overall and 26-17 power in the final two rounds to extend his final leads to 169-144 overall, 77-71 jabs and 92-73 power.

Most of Garcia's offense targeted the head, as all but six of his connects hit the head while 58 of Lipinets' 144 total connects struck the flanks. 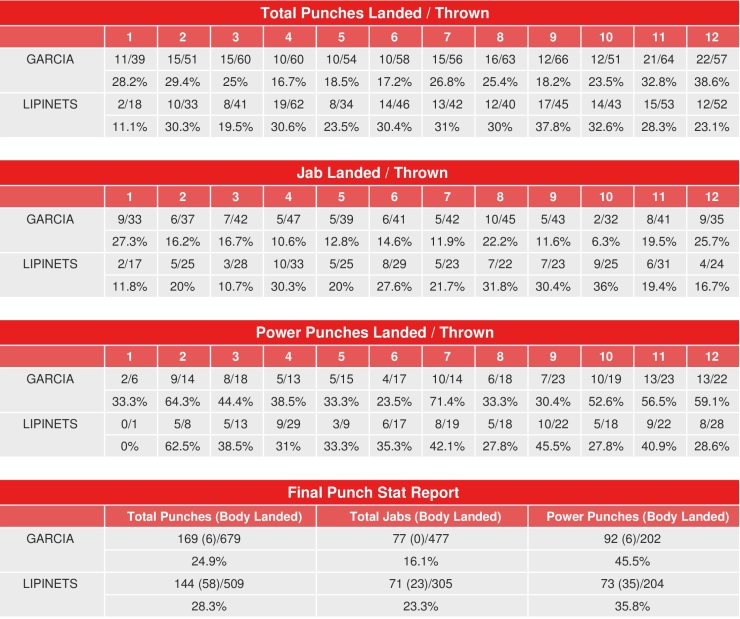 Garcia, who was fighting for just the second time at 140 pounds, relied on a steady diet of combos to back up Lipinets, who was making the first defense of the IBF title he won last November on SHOWTIME. Garcia floored Lipinets for the first time in his career, connecting on a counter left hook midway through the seventh in a rousing moment that sent the pro-Garcia crowd at Freeman Colisuem to their feet.

After the fight, Garcia, who still holds the WBC title at lightweight, reiterated his mantra that he's seeking the biggest fights available, regardless of weight division.

Mikey is a real great boxer. I wish promotions didn't hold him back for so long. But hey we might get 2 more fights out of him this year maybe 3.