Mikey Garcia On Spence Loss: So What! It's Like It Never Happened

Mikey Garcia lost the much vaunted zero on his record when he lost his first professional fight to Errol Spence Jr. in his pay-per-view debut.

For most fighters, a defeat can be deemed as two steps back. For Garcia, it might as well have been another step forward, as he’s fresh off signing a one-fight, $7 million deal with Matchroom Boxing to fight Jessie Vargas on Feb. 29 in Texas on DAZN.

“My mind is not on the loss. It’s to keep moving forward in a positive direction,” Garcia told BoxingScene.com in an interview. “Losses are a part of boxing. You lost. So what? I fought the best guy in the division and moved up two weight classes. Why should I be sad and crying? If I keep dwelling on the past, then I’ll be depressed. That’s not who I am. Fast forward to now, I’m f------ excited! I’ve been on a high hitting on everything that I wanted. This is f------ badass. I can’t believe how I took that loss, it’s like nothing ever happened. I keep going, and I’m doing very well.” 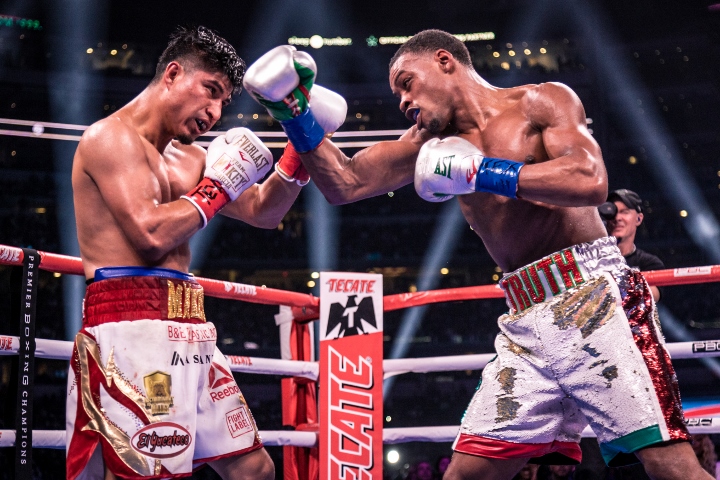 The 32-year-old Garcia’s (39-1, 30 KOs) stock still remains high, as a date with Manny Pacquiao later in 2020 seems within arms reach if he can successfully get past the bigger Vargas (29-2-2, 11 KOs). Garcia doesn’t feel down on himself, or his chances, against the fellow Mexican fighter.

“There’s a lot more I can deliver that wasn’t shown in my last fight,” said Garcia. “I know that for a fact. My fans know that I can provide more, but for whatever reason I just wasn’t able to. I was slow, sluggish and tired versus Spence. Everything that could have went wrong, went wrong, and there was nothing else I could do. I want to prove that I am faster, smarter and stronger.”

Garcia’s stance on the loss is a refreshing approach, but it shouldn’t be lost that his vast viability stems from his marketability. He remains a big draw in the Southern California and Texas markets and pulls mass audiences toward TV almost every time that he fights.

DAZN is hoping Garcia’s one-fight dance can mirror many of the metrics he provided throughout the years fighting on HBO, Showtime, and most recently, Fox pay-per-view by way of new subscribers to the streaming platform.

Son, that fight proves you don`t belong to 147.

He lost a match he was expected to lose, in his mind he's probably secured a moral victory for going the distance

[QUOTE=GhostofDempsey;20299169]What was Mikey’s hurry, he fights once per year? He dodged Loma. Spence was a perfect boogeyman to save face. Now he wants to pretend the loss doesn’t matter.[/QUOTE] Spence was a big money fight on PPV in front of…

Mikey is a part time fighter, no reason to support this guy

[QUOTE=ShoulderRoll;20298864]This has ben covered before. Lomachenko said he wasn't going to fight Mikey next after having surgery. And Mikey wasn't going to sit around waiting for him to get around to it someday.[/QUOTE] What was Mikey’s hurry, he fights once…