Unified super lightweight champion Jose Ramirez (25-0)  has stated in several interviews that he is very interested in facing unbeaten WBO welterweight champion Terence Crawford (36-0) when he moves up in weight.

Crawford would be a sizable favorite heading into the potential fight but Ramirez is very confident that he would come out with the victory. In a recent interview with Fighthype's Rainbow Alexander, Ramirez said that people will be very surprised at how strong he will be at the higher weight class. 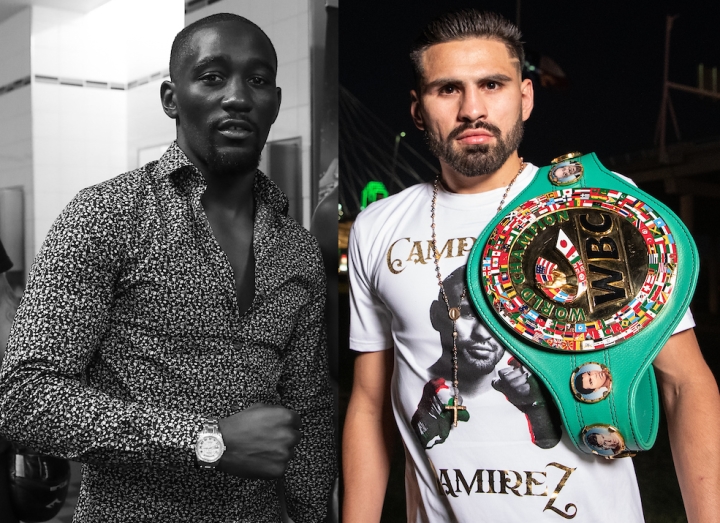 Former multi-division world champion Mikey Garcia is also confident that Ramirez can pull off the upset. Both are trained by Mikey's older brother Robert Garcia so there probably is a little bit of bias in his prediction.

"I just saw that news recently. I saw that a couple days ago. I don't know how soon he wants to move up. I don't know if he is planning on moving up in weight. I think he is probably going to wait for a Taylor fight first. If the time is right and he feels it is time to move up a weight class I definitely believe he can be a solid champion at 147 also. Even at 140 he is big, strong, he is huge so 147 isn't that big of a difference for a fighter like Jose," Garcia explained.

Ramirez is slated to face mandatory challenger Viktor Postol and then would likely move on to a Josh Taylor fight which would produce an undisputed champion holding all 4 major belts.

After that is when a move up to 147 pounds would likely happen for Ramirez.  Crawford began his career at 135 pounds and Mikey believes that Ramirez's advantages in size and strength would be the key to him defeating Crawford.

"Now a fighter like Crawford, he is very talented. He is very skilled but he is not maybe the strongest or biggest welterweight. I think that is where Jose's power and size can help him. It wouldn't be an easy fight at all because Crawford is a tremendous fighter but Crawford hasn't fought anybody lately with the skills and the caliber of Jose Ramirez," Garcia told Alexander.

"I don't want to sound like I am disrespecting any of his opponents but let's just be honest the last opponents that Crawford has faced have not been in the category or caliber of Jose Ramirez. That is why I feel Jose has a very good chance of doing something great. He is naturally big and strong and he's got that hunger. He's hungry for success. I am not saying Crawford doesn't but Crawford is not the strongest. He does have the skills though. I gotta respect him but he hasn't faced anybody lately, anybody like Jose. That is why I have to lean towards Jose for a potential fight like that."

[QUOTE=Squ□redCircle34;20655533]You make some excellent points but let’s be honest, there’s no telling if Bud would’ve signed with PBC that he would’ve gotten the Danny, Thurman or Spence fights! Look how long it took Spence-Porter, Thurman-Porter, Danny-Porter and etc. Thurman-Spence was…

Gotta like Ramirez even though he beat my boy Hooker, dude really is the people's champ, but frankly I don't think he's on Bud's level. I'm hoping we get Ramirez vs Postol because that should really tell us more about…

[QUOTE=Curt Henning;20653646]interested in your opinion on this in 2018 arum was quoted as saying that porter and garcia werent elite fighters late 2019, right before the mean machine fight, arum was saying that they had their eyes on porter next.....immediately…