Mike Tyson Smoked Weed Before & After Roy Jones Fight, All Throughout Training Camp

Mike Tyson has been enjoying his budding cannabis business over the last few years presiding over Tyson Ranch and pairing it with the appropriately named podcast “Hotboxin.” (Photo by Joe Scarnici/Getty Images for Triller)

He’s apparently been avoiding one of the most famous movie lines and lessons of all time — “don’t get high on your own supply,” as Michelle Pfeiffer once said in “Scarface.” 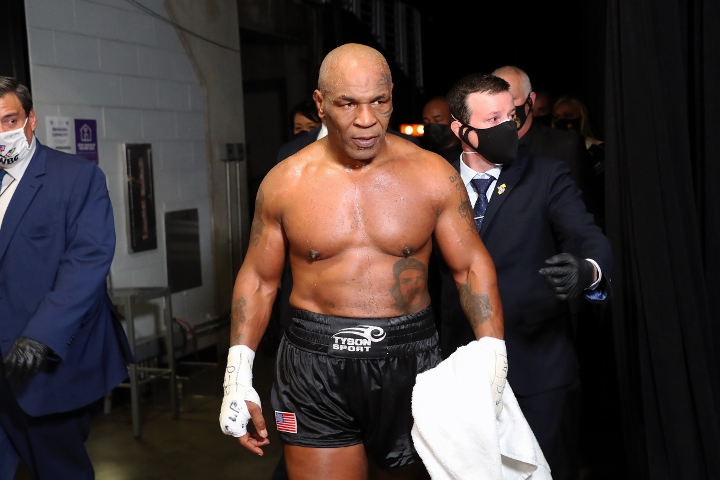 Tyson admitted that he smoked marijuana during the day of his exhibition match versus Roy Jones Jr., immediately after the fight, as well as all throughout training camp.

“Absolutely yes,” Tyson said. “Listen, I can’t stop smoking. I smoked during fights. I just have to smoke, I’m sorry. I’m a smoker. … I smoke every day. I never stopped smoking … It’s just who I am. It has no effect on me from a negative standpoint. It’s just what I do and how I am and how I’m going to die. There’s no explanation. There’s no beginning. There’s no end.”

When asked if smoking pot helped Tyson deal with the pain of the punches he absorbed in the ring, he said: “No, it just numbs me. It doesn’t numb the pain.”

Tyson has previously abused cocaine, but his substance of choice these days is weed.

Marijuana has always been prevalent in Tyson’s life dating back to his childhood days growing up in Brownsville, New York. Indulging in marijuana carried over to his professional career, as he tested positive for the substance against Andrew Golota in 2000. His two-round stoppage and win was changed to a no contest, and Tyson was forced to pay a $200,000 fine.

Tyson’s preference for marijuana even led him to use a prosthetic penis with his child's urine during his prime just so he could pass drug tests.

Tyson said his self-destructive days are a thing of the past, and now he just wants to help others by boxing in exhibitions for charity.

“This is not who that is right now. That guy was just somebody that had to be. Eventually, he was a platform to become me.”

Manouk Akopyan is a sports journalist, writer and broadcast reporter. His work has been featured extensively in the Los Angeles Times, ESPN, USA Today, The Guardian, Philadelphia Inquirer, Men’s Health, NFL.com and BoxingScene.com. He can be reached on Twitter, Instagram, LinkedIn and YouTube at @ManoukAkopyan, via email at manouk[dot]akopyan[at]gmail.com or on www.ManoukAkopyan.com

[QUOTE=PunchMeIDareYou;20922985]Don't let this drug addicted rapist scumbag fool you. The real Tyson still lies within and this just proves it. Rapist![/QUOTE] To go down there and call him a rapist when we are talking boxing shows what a small Man…

good for him, keep enjoying life and being happy

[QUOTE=Armchairhero;20924989]I’m not pro weed, but what is untrue? It’s legal across many countries and states right now. To me it’s no better or worse than drinking. I’d imagine old banged up athletes would benefit from the pain relieving properties, good…

[QUOTE=jbpanama;20923938]Your Jealous Skirts are showing... Mike's a successful businessman !!![/QUOTE] Yeah I'm sure they teach Mike's model money management techniques in economic classes across the country. Did it ever occur to you that some people judge "success" and "role model"…