HBO Max has the latest in a long tradition, bringing together the surviving cast members of the Fresh Prince of Bel Air for a breezy hour and change. The stars watch old clips, tell old stories, and this one even brings together former squabbling castmates to bury the hatchet.

The audience gets to remember the fashions, remember where they were when, and get a little catharsis along the way. It’s fun for what it is and meets expectations on that level.

Read the last sentence again. Take the thought into this Saturday when former heavyweight champion Mike Tyson and former pound-for-pound king Roy Jones step into the ring on pay-per-view.

There’s some distinct groups of boxing fans when it comes to the pending exhibition.

There’s the group that just ain’t watching. They know this isn’t supposed to be a real fight. While they won’t wear headgear, eight two-minute rounds, no official judges, and 12 oz. gloves is the set up for a showcase. They’re unwilling to contribute to the influencer silliness on the undercard and perhaps even genuinely concerned about what could go wrong when a 54-year old Tyson and 51-year old Jones start punching. Tyson-Jones isn’t for them but they’re not telling anyone else how to spend their money. They get what others might find interesting.

They’ll just focus their attention on the excellent, 2020 relevant, heavyweight clash earlier in the day between Joe Joyce and Daniel Dubois and be good for the day.

Then there’s the group who doth protest too much. They’re a little too aggressive in reminding everyone this isn’t a ‘real’ fight. They’re sort of like the people who still badger folks who watch pro wrestling with “it’s fake” as if they just unearthed the Grail.

Thanks for letting everyone else in on the secret.

The last two groups are the folks who will tune in this weekend.

The first are those who will pretend they won’t but be on Twitter or Facebook talking about it from bell to bell and then starting conversations about what would have happened if Tyson and Jones had squared off in 2003 or both in their primes. Some have already started. They should just go ahead and join the other group.

That’s where this scribe falls. Mike Tyson and Roy Jones are going to throw on some gloves and shake out their tired old bones for 50 bucks? 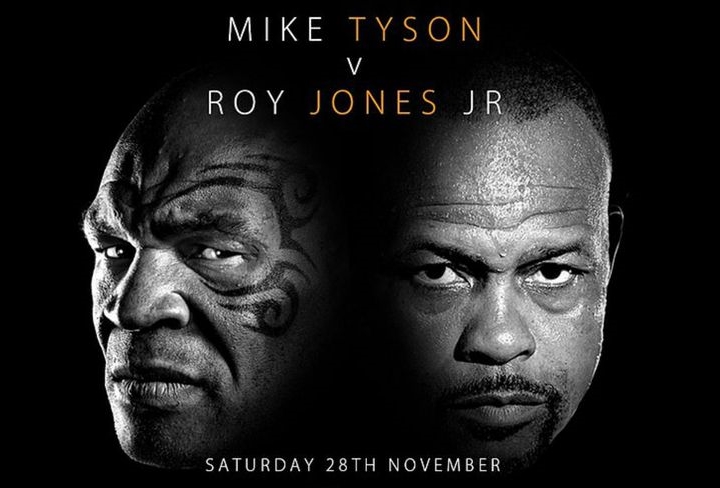 Like the disinterested, it’s impossible not to be a little worried about a Jones who went from Mr. Untouchable to Mr. Too Touchable over the years being hit by even an old Tyson. The history of exhibitions in boxing is on the side of this being relatively harmless fun. Jack Johnson and Joe Jeanette had an exhibition bout in 1945 when Johnson was almost seventy. Jack Dempsey was doing exhibitions until the dawn of World War II.

Just weeks ago, we got to see the latest stop on the Julio Cesar Chavez-Jorge Arce exhibition series and it was fun. They knew how to put on a show, do what they still love to do, and keep it safe.

The smart folks there to see any of the exhibitions described likely took it for what it was: a chance to say you saw them live or in person at all if one couldn’t be around for the good stuff.

Anyone who has followed the stories of Tyson and Jones over the last thirty years and more can’t help to at least be curious. Maybe seeing Tyson knock Trevor Berbick down three times with one shot gave birth to a lifetime love of prizefighting. Maybe Jones dazzling James Toney still inspires awe, or memories of rallying roommates in college during Jones fight weeks by loudly screaming “Roy” at odd moments or hours pull at the nostalgia strings.

This is one more chapter in all of that and it’s okay to be a completist. Tuning in won’t tell anything about the past but the chance to see a glimpse, a flash, of what was special once can be entertaining. As long as no one gets hurt, even if it’s a farce it’s one no one can be upset about afterwards. It doesn’t have to be Corrales-Castillo. Two fifty-some year old battlers still have an itch to scratch and so do some of their fans.

Along the way they might tell old stories and do a little remembering of where we were when.

No knockout and no winner = no buy for me

[QUOTE=REDEEMER;20909870]Hopefully no shenanigans takes place prior before the fight where they change to b.s rules with two sided conflicting reports. People are paying a lot of money to see a winner ,they should be refunded if in fact the commission…

[QUOTE=theface07;20910370]Really? Men didn't wear ponytails or lipstick in the 80's or 90's? I don't know what rock you've crawled out from under but men were dressing in drag and putting on makeup long before the mid 80's. Little Richard wore…

I'm still trying to work out what category I belong to. I suppose it depends on how much 'they' insult my intelligence. I can be any one of those categories Cliff was mentioning, and even some that fit in-between. That…