Mikaela Mayer: Everything Came Along At The Perfect Time

Mikaela Mayer has expertly marketed her own brand as well as she’s honed her craft in the ring.

It wasn’t until after her most recent bout, however, when it sunk just how many people are paying attention to her every move.

“Magic Johnson just tweeted about me,” Mayer exclaimed to BoxingScene.com of the legendary Hall of Fame former NBA star who caught the 2016 U.S. Olympian in Tuesday’s headlining act on ESPN.

The feat was a history-making moment for the network. Mayer’s 10-round win over Nigeria’s Helen Joseph (17-5-2, 10KOs) marked the first-ever female boxing main event on ESPN’s flagship station, and the first to headline on any ESPN platform since 2007. It was a long time coming in every sense of the word for Mayer (13-0, 5KOs), who was out for nine months due to two separate fight date cancellations before landing in the right place at the right time for a change. 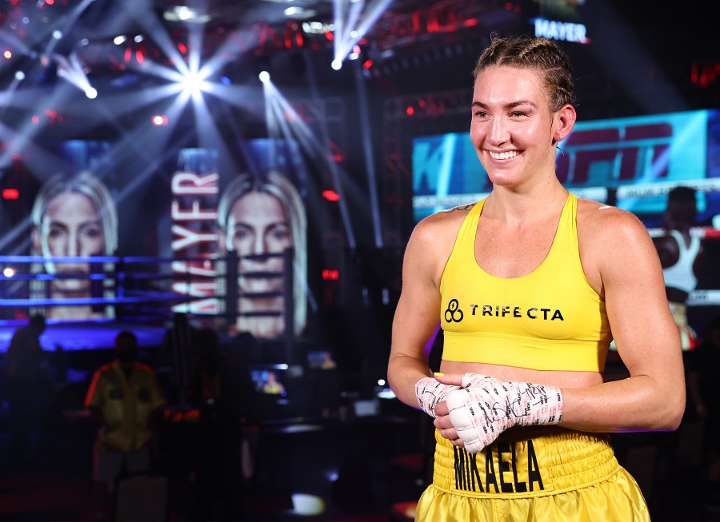 Mayer—who hadn’t fought since a 6th round stoppage of Alejandra Zamora last October in Reno, Nevada—was originally scheduled to face Joseph in the evening’s co-feature, in fact to a bout rescheduled from June 9. An unexpected upgrade came on Monday after reigning 130-pound titlist Jamel Herring tested positive for COVID-19—his second such occasion in three weeks, although the latest ultimately proving to be a false positive, though not soon enough to avoid the cancellation of his title defense versus Jonathan Oquendo.

“It’s not the way we wanted it to happen, but at the same time it’s proof that patience leads to opportunity,” notes Mayer. “It was a long time coming for me to finally headline a show. I’ve worked so hard to get her but would only get little pieces of exposure.

“[Tuesday night], we were able to shine a light on women’s boxing.”

The moment came along five weeks after Mayer’s only coronavirus testing battle. The unbeaten junior lightweight contender was said to have tested positive ahead of her eventually canceled June 9 clash with Joseph, though—as Herring has done in his most recent episode—managed to get medical clearance of the test producing a false positive result. Rather than appear in a co-feature to a show topped by training teammate Shakur Stevenson, Mayer was afforded the chance to ultimately star on her own show.

The closest she’s come to that type of spotlight came last June, when she stopped the preliminary undercard portion of the Vegas debut of Tyson Fury (30-0-1, 21KOs), with the main card streaming live on ESPN+. Plenty of eyeballs were on Mayer and the ESPN undercard telecast on which she appeared, with the three-hour prelim averaging 493,000 viewers and her bout peaking at more than 800,000.

Tuesday’s dominant win over Joseph drawing the weeknight interest of celebrities such as Earvin “Magic” Johnson tell her that the arrival was well worth the journey.

“Top Rank signed me—the first woman ever they signed to a promotional contract—and developed my career, but then we hit a point where I couldn’t get the world title shot I was supposed to get,” notes Mayer. “I feel like I always get one foot in the door but then it’s one toe out. But I just stayed confident that something like this would happen.

“Everything came along at the perfect time.”

[QUOTE=Buggy bear;20661058]Mayer will beat a game , young and talented fighter like Harper , mikaela will have mature strength , more experience and to much for the youngster , be interesting to see how Hearn and her team approach a…

[QUOTE=1hourRun;20660252]We coming for you Terry Harper![/QUOTE] Mayer will beat a game , young and talented fighter like Harper , mikaela will have mature strength , more experience and to much for the youngster , be interesting to see how Hearn…

We coming for you Terry Harper!