Mikaela Mayer Continues To Clear Obstacles In The Pro Ranks

Once an aspiring model as a teenager, Mikaela Mayer took to combat sports at age 17—normally early enough in life to learn something new, but told at the time that it was too late to make an impact.

It was at that very moment when she accepted her first challenge—entering a world where she’d constantly have to kick down doors just to gain acceptance.

“I’ve known from the very beginning that there wasn’t a big market in boxing for women,” Mayer (9-0, 4KOs), 27, told BoxingScene.com of the journey that has continually proven naysayers wrong. “It never made me frustrated; instead, it allowed me to reconsider how to develop my brand, using social media to my advantage and developing sponsors.

“When I first decided to box, women’s boxing wasn’t widely accepted in the pros and wasn’t yet an Olympic sport. My dream was to help create a market for women’s boxing. It pushed me to want to create something bigger and challenge myself.” 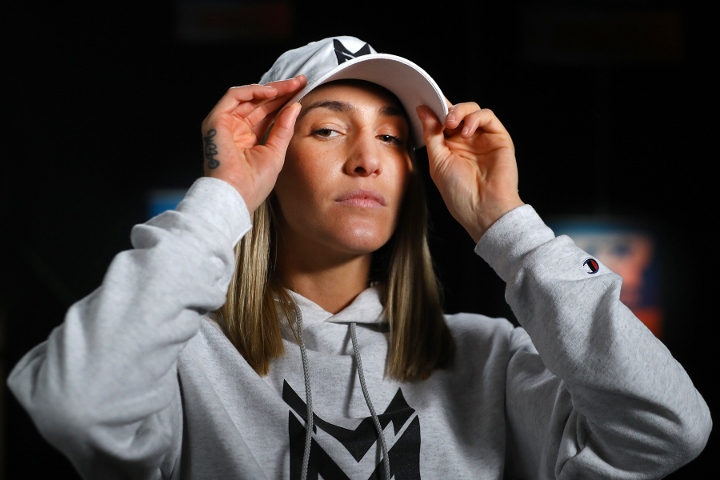 More than a decade later, Mayer finds herself quickly becoming a regular on the ESPN boxing circuit. She will appear on Friday’s telecast in an eight-round battle versus second-generation boxer Yareli Larios, the daughter of former two-division titlist Oscar Larios.

Mayer’s entire pro career has been affiliated with ESPN and its various platforms, thanks to a long-term deal between the cable sports powerhouse and Top Rank Inc. Friday will mark her 10th pro bout, all of which will have aired live either on ESPN+ or ESPN, beginning with her Aug. ’17 pro debut on the undercard of a Vasiliy Lomachenko title fight.

Her status as a featured attraction in the Top Rank stable comes after years of the Las Vegas-based company largely serving as a boys-only club. In fact, its past association with women’s boxing was limited to sideshow-like Pay-Per-View undercard offerings of Mia St. John in the 1990s.

Times have changed, but Top Rank’s desire to secure and develop promising talent has always remained intact. It led to the company signing Mayer to an exclusive contract shortly after her stint in the 2016 Rio Olympics.

“I’m the first woman boxer that Top Rank has signed to a multi-year contract,” Mayer notes. “It’s a big responsibility, but I believe I represent them well every time I step in the ring.”

It actually took two tries for Mayer to find a spot on the U.S. Olympic boxing squad. She wasn’t quite there yet in 2012, the first year that the Olympic Games decided to add women’s boxing to its rotation. She’d only been in the game for five years, coming along as far as she did after being told as a 17-year old that she was too old to start out in combat sports when first visiting a neighborhood Muay Thai gym.

Mayer didn’t just stick with the sport, but won her very first match in that genre. She’d switch over to boxing a year later, fighting just well enough to advance to the Olympic trials only to fall short and miss out on her Olympic dream.

Four more years of perfecting her craft allowed Mayer to make her way to Rio, joining defending Gold medalist Claressa Shields as the lone two females on the U.S. squad. Whereas Shields went on to earn a second Gold medal, Mayer was eliminated in the quarterfinal round of lightweight competition.

It didn’t discourage her from abandoning the sport; quite the opposite as she begun the transition to the pro ranks—a process that remains an every day part of training camp.

“When I made the transition from amateur to pro, Coach Al (Mitchell, Mayer’s Olympic coach and current head trainer) was specific in slowing down my style, planting my feet and picking my shots rather than just throw punches to score.

“All credit to my team, they were adamant in getting rid of that amateur style. The main thing I had to work on was avoid pulling straight out. In the amateurs, you hit and then pull straight back to avoid getting hit. So what we’ve worked on is staying in the pocket.”

In less than two years as a pro, Mayer has already transformed from aspiring model-turned-boxer into a rising contender. Her scheduled eight-round bout with Larios (13-1-1, 3KOs) represents a steady progression in competition as well as a different look style-wise.

“She’s from Mexico, but not a typical Mexican style fighter,” Mayer observes, “She’s more of a boxer, but our plan will be to keep her in the center of the ring, coming forward with my jab and applying pressure. It’s an aspect of my pro game that I’ve come to appreciate and once I’m able to control the pace, it’s hard for opponents to handle my pressure.”

Along with further developing her skillset, Mayer has also enjoyed a steady stream of ring activity fighting roughly every other month. A similar schedule would be welcomed, although it could change if she gets to check off another career goal.

“Not looking past Yareli, of course, but going into 2019 the plan was definitely to start taking bigger fights,” Mayer insists. “Top Rank has matched me well so far, I’ve seen a lot of different styles. Within my next few fights, I’d love to fight for a title at 130.

“The long-term goal is to win titles in multiple weight divisions, but of course we have to move one fight at a time. I’m excited for this fight to be on ESPN, doing my part to show that female boxers belong on the big screen and shining a light on women’s boxing.”

Living her dream, one kicked-down door at a time.