Miguel Berchelt: After I Beat Sosa, I Want Oscar Valdez!

WBC super featherweight world champion, Mexico's Miguel Berchelt, is in the strong stage of his preparation, with a view to what will be his sixth defense.

Berchelt performs double training sessions in Hermosillo, under the supervision of renowned sonorous coach Alfredo Caballero. In the morning, he performs the physical conditioning stage, with running sessions and aerobic routines, and in the afternoon he complies with the training plan, with sparring and other activities.

There are up to four different sparring partners with intense sessions from Jesús Quijada, Daniel Lugo, Bryan Acosta and Pedro Campa. 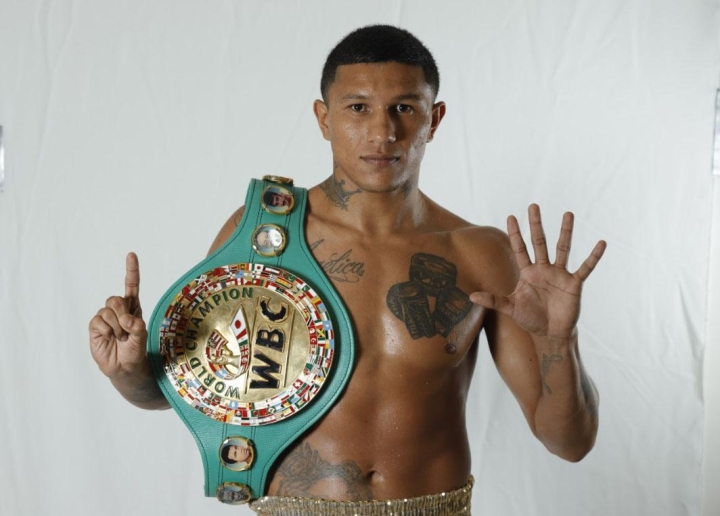 Berchelt, born in Cancun and adopted in Mérida and Hermosillo, was proclaimed WBC champion in January 2017, taking the title off Francisco Vargas by knockout in 11 rounds.

And since then he's defended his title against Takashi Miura, Maxwell Awuku, Jonathan Víctor Barros, Miguel Roman and this past May, in a rematch, with Vargas.

"I feel phenomenal, we are at a point of preparation that is more than excellent. Everything is going great, the training plan of my coach Alfredo Caballero that has been fulfilled one hundred percent and we see the results. I do not doubt anything about winning on November 2, because I want the big names... first being Oscar Valdez,” Berchelt said at the end of one of his sparring sessions.

Sosa, meanwhile, after losing two consecutive fights in 2017 to elite boxers such as Vasyl Lomachenko and Yuriorkis Gamboa, has won his three most recent fights, over Reynaldo Blanco, Moisés Delgadillo and Haskell Lydell Rhodes.

In June 2016, Sosa became the WBA "regular" world champion by knocking out then undefeated Javier Fortuna, and five months later he defended this title against Stephen Smith, on points.

Before winning this title, he had a draw against undefeated Nicholas Walters.

The coach of Berchelt is aware of the danger of Sosa, and therefore they have carried out an arduous and demanding training program both physically and tactically.

“We have to work hard on the strength and condition of Berchelt, because Sosa will demand it to the fullest. We have to keep up the fight pace from the first to the last round and not leave the initiative. The work program is going perfectly, and Miguel is responding beautifully. He will rise in there at 100% in every way,” said Alfredo Caballero.

[QUOTE=sharkeyez;20125691]I live in Los Angeles. As real as it gets. Berchelt will beat Valdez and then shock Loma. I have been watching boxing since I was 6 yrs old and was an amateur for 8 yrs. I know a special…

I live in Los Angeles. As real as it gets. Berchelt will beat Valdez and then shock Loma. I have been watching boxing since I was 6 yrs old and was an amateur for 8 yrs. I know a special…

Valdez might never be the same after Berchelt gets done with him. Berchelt will give him a slow beating.

[QUOTE=sharkeyez;20123719]Berchelt is a special breed of fighters that come to be ever so often. He has laser focus and has a “lock on” his target. Once he locks on to the target, he destroys it. I love Valdez and he…

[QUOTE=anonymous2.0;20123359]Yes and unfortunately it doesn't look like a unification is in his future. Shame because I can see him beating both Farmer and Herring 8-4 with Davis being a toss up.[/QUOTE] Dude probably wouldnt beat none of them he akready…