Michel Soro Has No Problems in Stopping Greg Vendetti

In the chief support Ukrainan Petro Ivanov, 10-02-, was floored in the second but got up and wore down Louis Toutin, 12-1, and won on a ninth round stoppage.

In other action Moroccan super welterweight Mohammed Rabii, 8-0, again impressed as he outscored Alexandr Zhurakovskiy, 13-5, over eight and super middleweight Mickael Diallo, 18-0-2, knocked out Genaro Quiroga, 14-15, in the third. 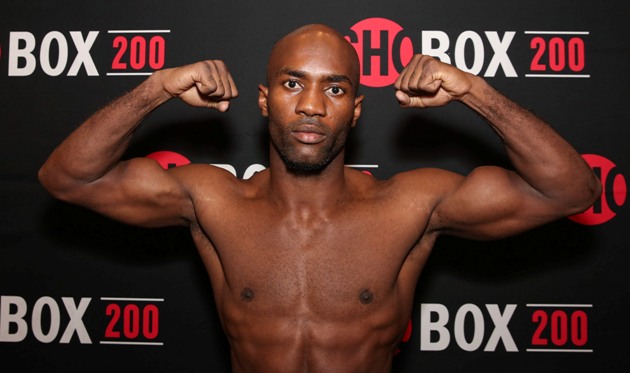 Belgium had three female fighters in world title fights last night and that must be some kind of record. In Carson, California, Femke Hermans lost to Claressa Shields while WBC lightweight champ Delfine Persoon, 42-1, defended her title at home in Ardooie and outscored Kenyan Judy Waguthii. In Brussels flyweight Sanae Jah, 15-3-1, lost to Serbian Nina Radovanovic, 14-2, in a fight for the vacant IBO title.
...

As reported elsewhere Filip Hrgovic beat Kevin Johnson in Zagreb. Also scheduled for that bill was heavyweight title fight between Erzen Rrustemi, 13-0 and WBFed champ, and Victor Emilio Ramirez, 22-4-1. However, a few days before the fight was called of and is now tentatively rescheduled for January 26.
...

In Montichiari, Italy, December 8 heavyweight Ivar De Berardino, 9-1-1, retained the national title with a stoppage win over veteran Fabio Tuiach, 29-6. The fight was stopped in the second.

"I wanted to send a message to the super lightweight division with a great performance and I got the knockout," said Keith Hunter. "It felt great to let my hands go. I'm going to get right back in the gym, so I can be ready for anything that comes my way. If my name is called, I'm going to be prepared, locked and loaded."

"I'm very excited about Keith Hunter's future," said manager Greg Hannley, of Prince Ranch Boxing. "Tonight, his power was on display and those watching saw a star in the making. He's getting better with each fight. He's going to be a problem for anyone."

Last night in Tijuana, Mexico, hot bantamweight prospect, Eros Correa, who is managed by Cali Boxing Management, improved to (4-0, 4 KOs), with a second round TKO when his opponent Luis Marin Lopez didn't come out after round one.

Correra, from San Jose, California, dropped Lopez with a left hook to the body late in the first round, then finished him off when he landed another left hook, this time to the temple.

"I'm happy to be staying busy in Mexico as I feel my career is heading in the right direction," said Eros Correra. "My team is doing a fantastic job getting me fights. I want the momentum to continue as I march into 2019. I believe next year will be a big year for me. I'm excited about my future.

Soro needs to come over to the US, he is a LEGIT contender at 154 for sure. Him and Brian Carlos Castano kinda flying under the Radar at 154…

This cat Soro should get a bigger fight finally.