Michael Seals: They Wrote Me Off After TKO Loss To Rodriguez

That’s how long it took for Michael Seals’ boxing career to completely come undone. Once he lost by third-round technical knockout to Edwin Rodriguez in a wild, back-and-forth slugfest, Seals felt abandoned by his promoter, Warriors Boxing, and his adviser, Al Haymon.

Seals was bewildered by what he considers mistreatment because the light heavyweight contender knocked down Rodriguez twice in the first round of their fan-friendly firefight. 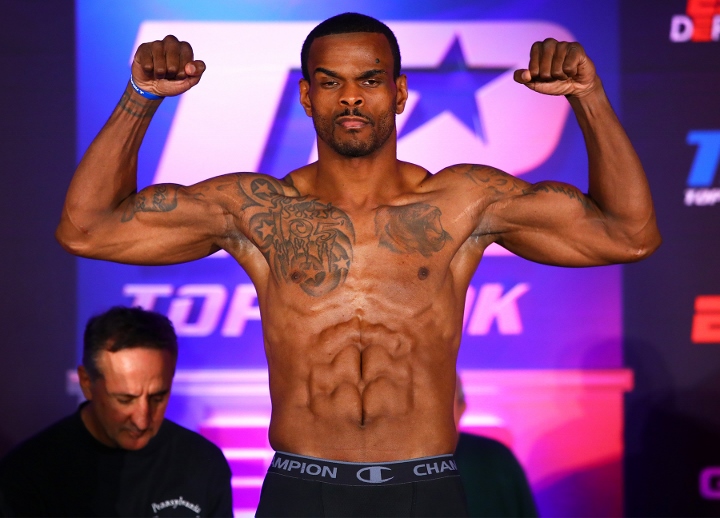 Surgery to repair a torn rotator cuff in his left shoulder was largely responsible for Seals’ long layoff after his November 2015 defeat to Rodriguez in Biloxi, Mississippi. Seals suffered that injury the week of his fight with Rodriguez, during his final sparring session in preparation for it.

“That’s why if you look at the fight, I didn’t really have a jab,” said Seals, who signed a promotional contract with Bob Arum’s Top Rank Inc. last year. “Every time I threw my jab [my shoulder] would roll out of place. I didn’t have a jab and I couldn’t defend myself for real. So, I was just trying to walk him into the right hand, and I did.”

A disoriented Rodriguez was saved by the bell, but he recovered quickly and hurt Seals badly late in the second round. Another Rodriguez right dropped Seals a second time with 30 seconds remaining in the second round, but he then benefitted from the bell sounding to end it.

Rodriguez drilled Seals with another right hand that knocked him into the ropes and down again just 15 seconds into the third round. Seals got up from that third knockdown, but referee Fred Steinwinder III stopped the action 24 seconds into that round.

Four years later, the hard-hitting Seals will get an opportunity Saturday night to redeem himself. The 37-year-old Seals (24-2, 18 KOs), of Fairburn, Georgia, will face former WBO light heavyweight champ Eleider Alvarez (24-1, 12 KOs), the most accomplished opponent of his 11-year pro career, in a 10-round main event ESPN will televise from Turning Stone Resort Casino in Verona, New York (10 p.m. ET/7 p.m. PT).

Though a big underdog, Seals sees this opportunity as justification for sticking with boxing the past few years, when others urged him to start using the secondary education degree he earned from Alabama A&M. Seals states that he “doesn’t have a Plan B,” which was what made the trying time following his loss to Rodriguez so difficult.

“I had surgery like two weeks after that,” Seals said, referring to repairing his shoulder injury. “And then, when I came back it was like a year and a half, I think, and they was trying to give me Marcus Browne the first fight back. And I was like, ‘Dude, let me make sure my shoulder is good first.’ And when I said no to that, man, like I said, they had already written me off. That’s why they was trying to feed me to Marcus Browne, like not even caring if I was healthy or not. But after that, they really wrote me off. And then soon after that, I asked for a release. There’s no hard feelings, none of that stuff. And then, from that point on, man, my career was basically dead. And I was training every day, still. I didn’t know anything else to do. I just trained every day and my family were looking at me like, ‘Dude, are you retarded or something? You don’t have a fight coming up. Like, what are you doing?’ I’m like, ‘It’s gonna happen, man. I promise you, it’s gonna happen. You’ve gotta have faith. It’s gonna happen.’

“And every day I’m getting up, running, going to the gym. And I was driving Uber for like 13 hours and then I’d go to the gym. And I was like, ‘I’m not gonna give up on my dream.’ Even when I had to drive Uber to make money, I still went to the gym every day. And my fiancée, she’d come up and just open the door, because I have a treadmill in the room upstairs, and she’d come in and look at me and just drop her head and shake her head, like, ‘Why Mike? You’re killing me. Come on, man. You have a college degree.’ I’m like, ‘No, I don’t. I’m making this work. This is going to work.’ I have too much invested in this. I’ve sacrificed too much. I’ve lived with rats. I’ve been homeless. I’ve been through so much, bro. I’m about to tear up, man. Holy sh*t.”

Watching the Rodriguez fight live at Beau Rivage, I could definitely see the potential there. Seals has indeed been through he!! the past 4+ years, so I expect him to arrive at 100% for the Alvarez fight. Should be a…

[QUOTE=BigZ44;20330724]Seals/Rodriguez was one of the most entertaining fights I've ever seen. Just insane, balls to the wall action[/QUOTE] I agree... Rodriguez was never be the same after that slugfest!

I think Michael Seals can beat the overrated Browne.

Seals/Rodriguez was one of the most entertaining fights I've ever seen. Just insane, balls to the wall action

Michael's story is motivation. His faith and grind got him back to a place, where he can make his dreams come true. Good luck to him on Saturday. Thanks for sharing, Keith.