Heavyweight contender Michael Hunter has rarely heard a name opponent voice a desire to fight him, so he was quite pleased when fast-rising Filip Hrgovic did just that.

Hrgovic had just polished off veteran Rydell Booker in the fifth round, becoming the first man to stop him, on Nov. 7 on the Devin Haney-Yuriorkis Gamboa card when he said he was willing to fight Hunter.

Nisse Sauerland, Hrgovic’s co-promoter, said the same thing, telling the United Kingdom’s Sky Sports, “The Hunter fight would be great. Bring it on. Hunter is a good name. I rate him as a fighter, because he takes on pretty much anyone and doesn't really back down, and it would be a great fight. From our side we have got no qualms about fighting Michael Hunter, and it's going to be a great fight. We're ready, whenever.”

Hunter, a promotional free agent, said he is very interested in the fight whenever it can be made but that he plans to stay active because until he sees an offer he just does not believe it’s real.

“They have not called my phone and they all know my number,” Hunter told BoxingScene in reference to Sauerland and Matchroom Boxing’s Eddie Hearn, who is Hrgovic’s co-promoter and Hunter’s former promoter. “They speak like I’m difficult to deal with in a negotiation. I want to tell people that they never really spoke to me about Hrgovic.” 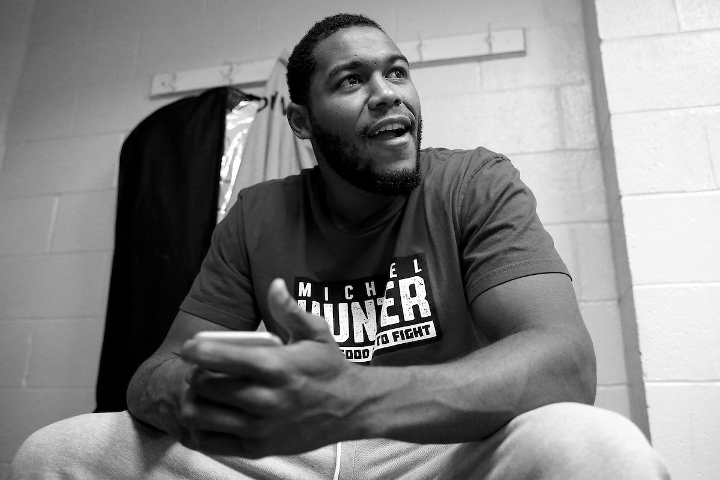 Hunter has been out of the ring since last December when he was on the Anthony Joshua-Andy Ruiz II undercard in Diriyah, Saudi Arabia, where he fought to a disputed draw with Alexander Povetkin. Hrgovic (12-0, 10 KOs), 28, a 2016 Olympic bronze medalist from Croatia, knocked out former world title challenger Eric Molina in the third round on the same show.

“Me and Hrgovic fought on (two of) the same shows last year,” Hunter said, predicting he would stop Hrgovic in the late rounds if they ever meet. “I was fighting more difficult opponents and every show I’d ask them what’s up? When you going to let me fight (Hrgovic)? They’d say that he’s too green and that he was still getting ready (for that caliber of fight). But absolutely, if he’s ready, I will fight him. I’ve already asked them on several occasions to fight him.”

Hunter said a rematch with Povetkin (36-2-1, 25 KOs) would also interest him. Povetkin followed their draw with a devastating one-punch, upset knockout of Dillian Whyte to win the WBC interim heavyweight title on Aug. 22 and has a rematch on tap once he is recovered from his bout with Covid-19.

“People think I won the draw,” Hunter said of his fight with Povetkin. “It was very controversial. I would go to his hometown in Russia and fight him in his hometown.”

But with fights against Hrgovic or Povetkin seemingly far from reality for the time being, Hunter is going to stay active.

The fight is due to be the co-feature on a card headlined by former super middleweight world titlist Gilberto “Zurdo” Ramirez (40-0, 26 KOs) in a light heavyweight bout against Alfonso Lopez (32-3, 25 KOs). The fight will be Ramirez’s first in 20 months and the first under his own promotional banner following his departure from longtime promoter Top Rank early this year.

Hunter said he and Ramirez have a mutual business associate who helped facilitate Hunter’s appearance on the show.

“I’m looking for a couple of fights on my own, keep my free agency and boost up my stock so I can get the best deal,” Hunter said.

To that end, besides the December fight, Hunter and a representative of the Impact Network told BoxingScene they are working on a deal that would see Hunter headline cards on Jan. 9 against an opponent to be determined and Feb. 5 against Alonzo Butler (32-3-2, 25 KOs). Former junior middleweight world titlist Austin Trout (32-5-1, 18 KOs) could also appear on one of those shows.

“I just want to stay active and Impact wants to make me the main event in January and February,” Hunter said. “We’re working the particulars out now.”

Ultimately, Hunter hopes to win a world title. His only loss was by decision challenging then-cruiserweight world champion Oleksandr Usyk in April 2017.

After the defeat, Hunter moved up to heavyweight, where he has gone 6-0-1, including notable wins over Martin Bakole, Alexander Ustinov and Sergey Kuzmin.

“My dad was a heavyweight and it was always my dream to be heavyweight champion of the world. I liked being in the cruiserweight division but it’s so overshadowed by the heavyweight weight class,” Hunter said. “When I fought for that world title it wasn’t the best situation because I hadn’t fought in a year, I was looking for money, I had my back against the wall. Once I took that ‘L,’ I just knew I wanted to be a heavyweight.”

One division Hunter said he is not too interested in is bridgerweight, a division formally created by the WBC on Nov. 10 that has been inserted between cruiserweight and heavyweight for boxers over 200 pounds up to 226. It is meant to serve as a bridge between those divisions and is named after Bridger Walker, a 6-year-old boy who saved his 4-year-old sister from an attack by a wild dog.

When asked about his interest in the division, Hunter laughed even though he is the kind of fighter the WBC had in mind for the new division since he has weighed between 213 and 227 for his heavyweight fights.

“I’ve always wanted to be the heavyweight champion of the world. I feel like once I’m over 200 pounds I’m ready to fight any big guy,” Hunter said. “I don’t know how I’d feel if I got a bridgerweight world title. I wouldn’t feel it’s credible or something. I’m on the fence about it. I’d rather fight the bigger guys.

“I do well fighting the big guys. It’s not like somebody who’s 218, 224 isn’t a big guy. But I don’t want to fight in another weight class. I would go up a weight class to heavyweight because I want to be the biggest, baddest guy on the planet. Boxing does not need a bridgerweight division.”

Can Hrgovic take a punch? he should first fight somebody like Kiladze, Dinu, to test that.

[QUOTE=REDEEMER;20897493]I already showed proof this is fake news ,his 3 fight deal doesn’t stop a Hrgovic fight ,only Hunter put those fake roadblocks up of 3 fights . Cant you guys come up with at least one intelligent excuse here…

[QUOTE=JakeTheBoxer;20899009]Ruiz can fight Wilder or Povetkin or Ortiz. If Hrgovic wants to go IBF route, he should fight Martin, ex world champion.[/QUOTE] Eddie Hearn is the promoter of Hrgovic, Parker and Zhilei from the top of the IBF list. Joshua…

[QUOTE=heavyweight62;20898871]Pulev will now box with Joshua, Usyk attacks the WBO title, the others are possible next opponents for Hrgovic in December or next year.[/QUOTE] Ruiz can fight Wilder or Povetkin or Ortiz. If Hrgovic wants to go IBF route, he…

[QUOTE=REDEEMER;20898877]Ortiz has the worst resume I’ve ever seen for a former title contender and it doesn’t get him any closer to a WBC title shot because of Fury and AJ ,give me break with Ortiz who doesn’t fight any one…