Michael Hunter found his way back to the ring and the win column.

The second-generation heavyweight contender had his way with overmatched Shawn Laughery, scoring two knockdowns en route to a 4th round knockout.

Laughery was down in rounds one and four, the latter for the full ten count at 1:02 of round four in their Fite Pay-Per-View chief support Friday evening at Galveston Island Convention Center in Galveston, Texas.

Hunter didn’t waste any time going on the attack, not at all interested in going rounds despite enduring a 54-week layoff.

The Las Vegas-based heavyweight—whose late father Mike Hunter was a mid-level contender in the 1980s and 1990s—opened up fighting behind the jab out of a southpaw stance before immediately switching to conventional. Laughery was unable to do more than provide target practice, with Hunter wobbling the West Virginian southpaw with a right hand behind the ear. The ensuing flurry was capped by a right uppercut which sent Laughery to the canvas midway through the opening round. 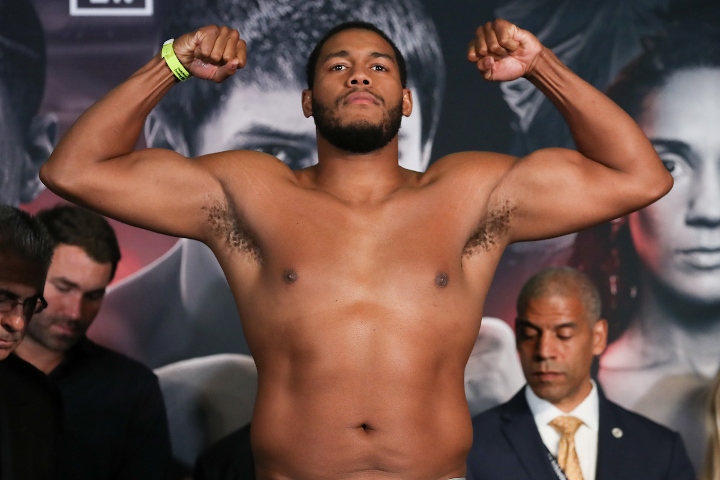 Hunter boxed his way through rounds two and three before closing the show in round four. A series of power shots hadLaughery reeling before a right hand forced the bout's second and final knockdown.Laughery remained down on a knee where he took the full ten count in falling to 10-4, snapping a modest three-fight win streak.

Laughery falls to 10-4 (6KOs) with the loss, snapping a modest three-fight win streak.

Hunter picks up his first win in 15 months, when he outpointed unbeaten Sergey Kuzmin over 12 lopsided rounds last September in New York City. The former cruiserweight title challenger then fought to a spirited 12-round draw with Alexander Povetkin last December, perhaps proving too tough for heavyweight contenders not quite in position to next challenge for a title.

The status as the division’s most avoided figure eventually led to an amicable separation with Matchroom Boxing USA. Hunter ventured out on his own, landing on Friday’s show where he improves his record to 19-1-1 (13KOs). The 32-year old is now unbeaten in eight starts since a hard-fought 12-round loss to then-reigning cruiserweight king Oleksandr Usyk in April 2017.

Fans have clamored for a rematch between Usyk and Hunter now that both are Top 10 heavyweight contenders. Friday’s winner sets his sights a little bit higher.

Hunter was first in line to offer his services the moment Povetkin was forced out of a January 30 rematch with Whyte (27-2, 18KOs) after testing positive for COVID-19. Whyte instead opted to initially wait out a healthy Povetkin before deciding to settle for a stay-busy fight—though mentioning names such as Luis Ortiz and Deontay Wilder.

For now, it appears that Hunter will have to keep stalking the rest of the heavyweight division until someone answers the call.

“I want to fight Dillian Whyte but really anyone can get it,” insists Hunter.”

It ain't all about aggression. Parker has a good set of whiskers, skill, stamina and experience. I just wish someone decent would call him out and matchroom gave it some decent promotion.

[QUOTE=pollywog;20962442]The boogeyman is the guy you don't name for fear they might actually call you out... That guy is Joseph OILSKIN Parker. Parker would clean Hunter and Usyks clock, not to mention Povetkin, Joyce, Hrgovic and every other fighter not…

[QUOTE=Dr. Z;20966808]Agreed. Joyce might as well be French in the eyes of the British. I don't get. Hrgovic has the ingredients to be heavyweight champion of the world.[/QUOTE] Joyce avoided Hrgovic and what was almost agreed to turned around and…

[QUOTE=JakeTheBoxer;20966811]Man, again, Hunter fought Usyk, Povetkin, Kuzmin, bakole. And you are telling me he is afraid to fight some Hrgovic, who fought nobody?[/QUOTE] None of those guys are 6”6 240 pound Olympic gold medalists with thudding power and rock chin...I…

[QUOTE=REDEEMER;20962872]Hrgovic toys with him . Hunter knows if he takes that fight he won’t see a potential title fight . He may have wanted it early on but after the Povetkin scare definitively not his actions speak for themselves, he…