American heavyweight contender Michael Hunter and Matchroom Boxing are parting ways after the promotional outfit opted not to renew its contract with the fighter.

Hunter was told by Matchroom Boxing CEO Frank Smith on Wednesday that he will no longer be a part of the promotional outfit’s plans moving forward, the fighter told BoxingScene.com.

“It’s all good, that’s just how life moves. It was a business move. Nothing is ever promised, and you don’t know what the next move will be,” Hunter told BoxingScene.com. “I don’t want to be fighting for someone who doesn’t want me anyway.”

“We did not make him a new offer following the expiration of his contract,” Hearn told BoxingScene.com. “There is a lot of heavyweight congestion and with the current issues and backlog I didn’t feel we could deliver him fights with our outstanding obligations within the division.”

The 31-year-old Hunter (18-1-1, 12 KOs) is now looking to begin the next chapter of his career with a new promoter and sponsor.

Hunter said he saw the writing on the wall lately, as Mathcroom was being distant. It became more apparent that he’d be on the outside looking in when the promotional company shared an image on social media of its top American fighters, and he was nowhere to be found.

“I was never fully embraced. I was more like an independent contractor for them,” said Hunter. “They didn’t want me to fight their in-house guys. I’m the boogeyman to them. It was hard for them to find fights for me, but I found that flattering that opponents avoided me. That’s the best badge of honor I could get … I know [not renewing my contract] was a business move, and I have no ill feelings toward them. I was a high risk, low-reward fighter for opponents.” 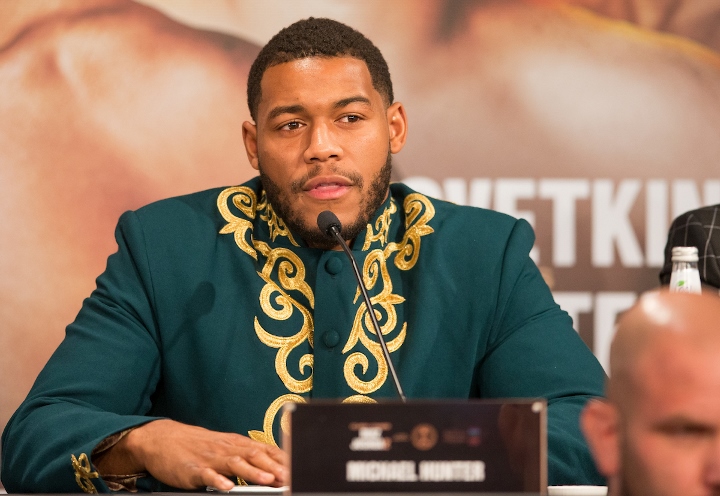 Hunter is coming off a competitive split draw against Alexander Povetkin last December in Saudi Arabia.

The former American Olympian Hunter fought four times under the Matchroom banner, all wins, but he believes he never was truly backed by the company because they were heavily invested into overseas heavyweights like Anthony Joshua, Dillian Whyte, Oleksandr Usyk, Dereck Chisora and Alexander Povetkin.

The Las Vegas-based fighter now feels he’d be a perfect fit for Top Rank or PBC to show his skills to American fans.

“It doesn’t make sense for rival promoters not to see my potential. I’m a young Black American. I speak well, I come from a boxing family, and I’m growing. We’re going to continue to take over,” said Hunter. “I think I’m still in a good position. I still have aspirations. I want to leave a great legacy for my family. I know what kind of potential I have. I will not settle for anything less.”

Hunter is convinced his stock is still as high as ever because he is ranked by all of the major sanctioning bodies, including No. 4 by the IBF, No. 7 by the WBO, No. 8 by the WBA and No. 10 by the WBC. Hunter is also ranked No. 8 by Ring Magazine.

In a sentimental move, the son of the late professional boxer Mike "The Bounty" Hunter (26-7-2, 8 KOs) wants to also fight for the USBA title, a crown once held by his father.

The lone loss of his career came to the hands of Oleksandr Usyk in 2017 via unanimous decision when Hunter was competing as a cruiserweight.

[QUOTE=REDEEMER;20638900]Hrgovic already has a win over Kuzman in the wsob I believe. If Hunter thought he could get by the undefeated Hrgovic I think he would have taken that fight . Hrgovic has grown into puncher now as well and…

[QUOTE=Mammoth;20639037]Don't bother with that mongoloid man. Waste of time.[/QUOTE] LOL does he have money invested in hrgovic? is he a hrgovic family member? i actually like hrgoviic but g... da...n. hrgovic is a nice prospect as are those other guys…

[QUOTE=REDEEMER;20639513]It depends if you really believe Yolka and Joyce beat him ,doing punch counts and effective aggression has him winning over Yolka and I counted clearer shots to Joyce and agreed with the judge that had him winning even in…

[QUOTE=Kannabis Kid;20639201]Yeah if you look at Hrgovics amateur career his only good wins are Joseph Parker and Kuzmin he beat Tony Yoka when Tony was debuting but then Tony went on to beat him twice and Joe Joyce beat him…