MGM National Harbor,Oxon Hill - Heading into the weekend, many observers though 30-year old former cruiserweight title challenger Mike Hunter (17-1, 12 KO), 215 ½, of Las Vegas, Nevada, was likely to have a short night and those prognostications were right. Hunter laid waste to 39-year old Fabio Maldonado (26-3, 25 KO), 240, of Sao Paulo, Brazil in two rounds to make it five straight wins in the heavyweight division.

The referee was Harvey Dock.

Hunter came into the fight rated just outside the heavyweight top ten by both the WBA and IBF and did nothing to lose position. After a relaxed feeling out first round, Hunter opened up with authority in round two, forcing a standing knockdown first then dropping Maldonado twice more to draw the stoppage at 1:45 of round two. 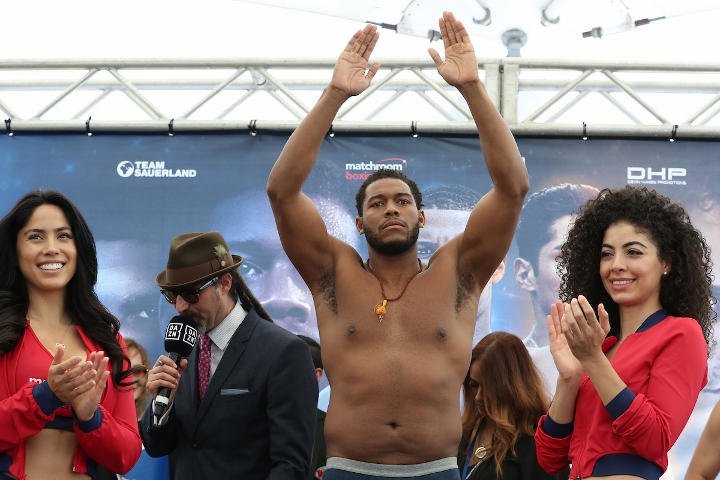 Hunter picked up his fourth straight stoppage in the unlimited class but isn’t chalking up the results to the purely physical. “It is the heart where I win at. I run them down. We are all over 200 pounds, but the difference is that I just have a bigger heart than everyone else.”

As to the future, including the possibility of facing unified titlist Anthony Joshua, Hunter stated,  “I would love that fight at any time. Any mandatory, anytime, really. I will take any fight, anytime. I am here to stay and I will take on anyone. I want to fight Joshua next. He is the cash cow and it’s an easy fight to make. We are both on Matchroom and DAZN. It should be easy to make that next. I’d like to fight Dillian Whyte if I couldn’t get AJ next.”

Maldonado loses his third straight and first by knockout.

Hunter is one of the few hw today who really can boxe. He's not big, though. He remembers me some of the boxers from the 70s. I'd like to see him against Povetkin.

Was a good performance, but the fact that Eddie threw him Maldonado shows that he was never actually in the Joshua sweepstakes.

Congrats to Hunter but that Opponent was PATHETIC!

Night of heavyweight mismatches. Hunter - Hrgovic would be interesting.