Michael Hunter and Alexander Povetkin delivered an entertaining fight that proved as competitive in the ring as was suggested on paper.

The only thing the 12-round scrap failed to produce was a definitive winner.

The pair of Top 10-level contenders fought to a 12-round draw in the evening’s chief support Saturday evening at Diriyah Arena in Diriyah, Saudi Arabia.

Hunter and team—which includes head trainer and former World heavyweight champion Hasim Rahman Sr.—guaranteed a knockout victory all throughout fight week. The second-generation boxer—whose late father Michael Hunter Sr. was a mid-level heavyweight contender—did his best to deliver on that promise right from the outset, taking the fight to Povetkin right from the opening bell. Hunter had the longtime heavyweight contender out of rhythm, scoring with rapid fire combinations upstairs and never giving Povetkin a chance to plant his feet and set up his own power shots.

The pattern held true for much of the second round, until Povetkin was able to remind the former cruiserweight contender of his natural size and power advantage. A right hand shot had Hunter briefly stunned towards the end of the round, changing the tempo of the bout moving forward. 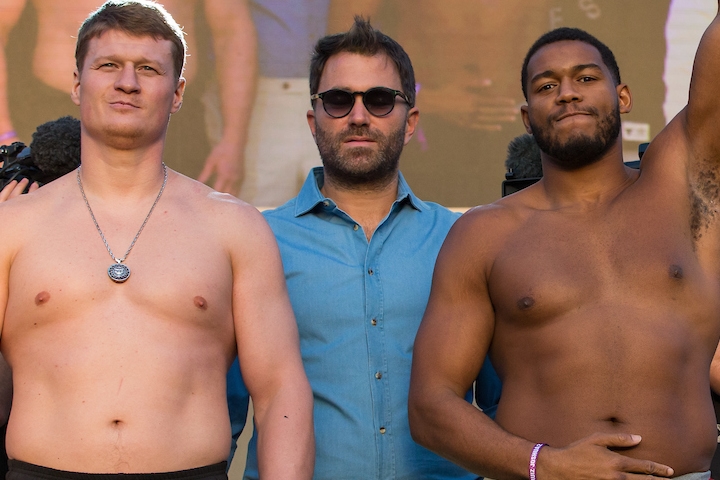 Povetkin became the aggressor although Hunter never shied away from mixing it up on the inside. Momentum was with the 40-year oldPovetkin, however, who was able to slip Hunter’s quicker hands and score with right hand counters.

Hunter survived a major scare late in round five, as a series of left hooks had him on unsteady legs. The last of the three caused Hunter to stagger into the ropes, with a case to be made that they prevented his fall, which normally constitutes a knockdown call. Referee Steve Gray observed the action, deciding that Hunter was merely off balance and not falling from the effect of a punch, although instant replays indicated that he blew the call.

It hardly discouraged Povetkin from charging forward, continuing to come forward and shooting his right hand with knockout intentions. A less-aggressive version of Hunter came out for round six, boxing more off the back foot and reaching to the body with his jab in his best efforts to keep Povetkin at bay.

A similar strategy transpired to begin round seven, although Povetkin quickly adjusted and scored with body shots which briefly forced Hunter to clinch as he did after absorbing an uppercut at close quarters. The mid-round clinching by Hunter was able to buy him some time, scoring with body shots which doubled over Povetkin. Momentum quickly swing back in the opposite direction, as Hunter was shook by an overhand right although managing to remain upright.

Hunter rediscovered his desired distance in round eight, circling to his left and jabbing to the body. The tactic transformed Povetkin from stalker to plodder, his offense stalled as Hunter was able to close with touch left hooks upstairs. The strategy carried over into a solid round nine as well, as the elder Povetkin looked as if he were searching for his second wind.

Povetkin fought through fatigue to reestablish his right hand in round ten. It didn’t carry the same effect as was the case earlier in the bout, although effective enough to slow down Hunter’s momentum.

Hunter righted the ship one round later, surging ahead in round eleven was Povetkin was briefly stunned with a flurry that began with a body shot. A clash of heads left the Russian boxer dazed, though the timeout granting him a breather. Hunter came out swinging once action resulted, a right uppercut snapping back the head of Povetkin.

With the fight seemingly on the table in the 12th and final round, both boxers were forced to fight through fatigue. Hunter’s attack slowed at the wrong time, although able to play just enough defense to force Povetkin to expend energy as he missed with wide shots. Hunter fended off an onrushing Povetkin, scoring with right hands also touching the body with left hooks.

In a rare occurrence, neither fighter seemed bothered by the split draw verdict, even if both naturally felt they did enough to win the bout.

“I don’t make the score so I don’t know what to say,” noted Hunter, whose record moves to 18-1-1 (12KOs), still extending his seven fight unbeaten streak even without getting the victory. “I just have to get back to drawing board. I thought I did enough (to win). But obviously the judges didn’t think so.

“I hope that we have another chance to fight him again. I don’t like to leave any stone unturned so I definitely want to do it again.”

It’s the continuation of an impressive stretch for Hunter, whose lone defeat was a competitive challenge of then-reigning cruiserweight champion Oleksandr Usyk. Every fight since then has taken place at heavyweight, with Povetkin providing his stiffest challenge yet.

That same level of respect was extended in return.

“I think it was 50/50 fight,” believed Povetkin (36-2-1, 24KOs), a two-time title challenger and former secondary heavyweight titlist. “I want to thank Michael Hunter for a good fight, a real good rumble. I respect Michael a lot and I want to do it again.”

The bout served as the chief support to the heavyweight title fight rematch between California’s Andy Ruiz (33-1, 22KOs) and England’s Anthony Joshua (22-1, 21KOs). Both bouts along with the heavyweight-themed undercard air live on Sky Sports Box Office in the United Kingdom and stream live on DAZN in the United States.

[QUOTE=JakeTheBoxer;20240822]I agree. Povetkin is shot. he is no competition for Joshua, Fury or Wilder. But he can compete with Hunter, Ortiz, Chisora, Whyte, Pulev and others. Sasha still can get many good fights.[/QUOTE] My top 5 going into last night…

They gave us the best HW fight of the night, so am glad none was the loser.

This was the best fight of the night. IMO, Hunter and Povetkin are both winners. Fought with courage and strength like true champions.

Hunter was a clear winner