For hardcore fights fans, he was worth waking up for.

Tuesday brought the news former three-division titlist Akira Yaegashi has elected to hang them up at age 37. It comes on the heels of a final, ultimately failed, title try at flyweight late last year. His farewell loss to Moruti Mthalane was streamed on ESPN+.

It was a fitting outlet.

The 21st century has opened up new avenues for the most ardent of fight fans. Services like DAZN and ESPN+ bring high quality streams to subscribers for fights from all over the world in a way previous generations could only dream about. Before those options opened up the search for ways to watch big fights around the globe, particularly in the lighter weight divisions, was already underway.

The universal acclaim of the Jr. featherweight bout between Somsak Sithchatchawal and Mahyar Monshipour as the 2006 Fight of the Year marked a notable moment in boxing viewing. YouTube views allowed for a fight off US TV to garner honors in the US market. Fighters and fights had an opening to cultivate cult followings on that outlet and others.

Starting with his epic 2011 win over Pornsawan Porpramook, Akira Yaegashi became one of the genuine cult favorites. It didn’t matter if it meant waking up in the wee hours of the morning to see his showdowns with Kazuto Ioka or Roman Gonzalez. The promise of violence Yaegashi often delivered on was worth the lost sleep.

Today, it’s worth a trip down memory lane to ask just how good Yaegashi was, measured against all time? 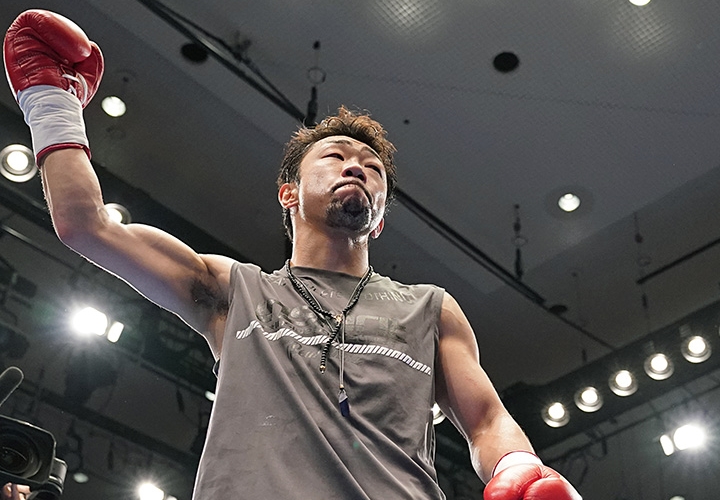 In going back over Yaegashi’s careers, five categories will be examined:

5. What Did He Prove

The Tale of the Tape

Yaegashi got his first title shot early, winning his first six pro fights before falling short to excellent WBC minimumweight titlist Eagle Kyowa in 2007. Winning eight of his next nine, Yaegashi earned a second title opportunity and delivered with a stoppage of Pornsawan Porpramook to win WBA honors at 105 lbs. Yaegashi lost the belt in his first defense, a grueling unification battle with Kazuto Ioka.

Two fights later, Yaegashi won the WBC and lineal crowns at Flyweight with a decision over Toshiyuki Igarashi. Three defenses followed before Roman Gonzalez ended his reign. Dropping back down the scale, it took Yaegashi two tries to snare a belt at Jr. Flyweight. His victory over Javier Mendoza for the IBF crown made him only the fourth fighter to win a major title at 105, 108, and 112 lbs. since the inception of the 105 lb. class in the late 1980s. The other three at the time were Leo Gamez, Ioka, and Gonzalez. Donnie Nietes and Kosei Tanaka have since joined their fraternity. Yaegashi would defend the last of his three titles twice.

Among outside the ring honors, Yaegashi’s victory over Porpramook was named the Fight of the Year by BoxingScene and ESPN for 2011.

While wins over current, former, and future titlists help to magnify a fighter’s career, they don’t always present the context of the time when they occurred. In Yaegashi’s case, a stoppage of Srisaket Sor Rungvisai in 2009 certainly can look great given what Sor Rungvisai has accomplished since. However, on that night in 2009, Sor Rungviasai was making his pro debut, giving the win more value as a name on paper than in its moment.

Title wins can also be misleading. Given the number of belts around, the value of each victory varies in quality even as they certainly add to income potential. Of more value is a look at where Yaegashi’s best opponents stacked up against the sum of the field.

Using the Ring Magazine and TBRB (from their establishment in late-2012 forward) rankings as a reasonable gauge of Yaegashi’s professional years, the below are the men who can be regarded as genuinely top ten when Yaegashi faced them. The ranking provided represents the most recent in Ring’s print edition or available through the TBRB archives prior to Yaegashi facing them.

All but one of Yaegashi’s career losses came to top ten opponents, with the lone outlier being a six round loss to Masatate Tsuji in his ninth start. Notably, none of the rated fighters Yaegashi faced entered off a loss and several were streaking when he faced them. Sosa, for instance, had won six straight since losing to then-flyweight champion Pongsaklek Wonjongjam and was having one of the best years of his career in 2013 with consecutive wins over Ulises Solis and Giovani Segura. Gonzalez was at the absolute peak of his powers, in the midst of a legacy defining run that brought him to the top of many pound-for-pound lists. Ioka, before and after, has been a force in every division he’s competed in from strawweight to Jr. bantamweight.

With eight of ten rated opponents in his 35-fight career being rated by Ring, TBRB, or both in the top five of their class when Yaegashi faced them, it’s clearly a solid cross section of some of the better fighters of the era in the three lowest weight classes.

As always, this section is concerned with what did not occur more than why it did not.

Rather than list every alphabet titlist from 105-112 lbs. Yaegashi could have faced but did not, and there are several who came and went during his years in the title picture, let’s focus on some of the most interesting.

Yaegashi’s reign at strawweight was brief and he faced a logical rival in Ioka. IBF titlist Nkosinathi Joyi would also have been a tough foe at the time. Even tougher would have been a flyweight whose reign overlapped with Yaegashi. Juan Fracisco Estrada held the WBA and WBO belts while Yaegashi held WBC honors and would have been every bit the challenge Gonzalez proved to be in 2014.

Yaegashi’s reign at Jr. flyweight overlapped with the WBO and Ring Magazine reign of Donnie Nietes from 2015-16. A clash there would have been fun. The same can be said of what would have been an all-Japan unification showdown with WBA titlist Ryoichi Taguchi in the same years. Yaegashi may not have defeated either, or ultimately just replaced outcomes on his career with a different path, but they are worth noting.

While there were times Yaegashi was physically overwhelmed in his career, he rarely if ever shrunk from the task. The epic eighth round of the Porpramook fight, where Yaegashi went from hunter to hunted after a brutal right hand, exhibited his instincts for battle. The war with Ioka was nearly as satisfying for viewers, Yaegashi staying in it until the end despite two grossly swollen eyes.

Lacking fight changing power or overwhelming defensive tricks, Yaegashi tended to react to adversity by continuing to punch. A committed body puncher with a snappy right hand and whipping left hook, his was a front foot posture. Sometimes, it was to Yaegashi’s detriment. He sought to overcome adversity by fighting through it. When he couldn’t, Yaegashi left little doubt that he’d given fans, and himself, everything he had to give from bell to bell.

What Did He Prove

To be the sort of fighter Yaegashi was, it meant exceptional conditioning and will. Yaegashi proved himself a gritty, true professional throughout his fourteen year paid tenure. He also proved able to focus past defeats to continue to achieve. He was a definitive example of the warrior willing to go out on his shield. The losses to Ioka and Gonzalez might have cut other careers shorter, and the ill-fated decision to take on Guevara months after the beating from Gonzalez would have meant an end for some. Yaegashi picked himself up and found more in the tank, toppling the solid Mendoza for one more crowning moment.

Even in the final loss to Mthalane, Yaegashi was there beating away to the body and giving everything he had, keeping it competitive until the sand finally ran out of his hourglass for good. It would be hard to find many who woke up early, or paid for a ticket, to see Yaegashi who could ever be disappointed in the effort he provided.

Yaegashi won’t go down as an all time great. He was 4-6 against the rated foes he faced, 4-4 during the years when he was a rated competitor as outlined above, and while those losses were to some of the best at his weights it speaks to a ceiling on his talent. He was never widely regarded as the best active competitor in any of his divisions. Even during his reign as history’s flyweight champion, most would have pegged Estrada and the then-uncrowned Gonzalez as the leaders of the field at flyweight.

Among the six men who have held one of the major sanctioning body titles from strawweight to flyweight, he may rate at the bottom. Gamez was held in higher regard in his time at strawweight and also became the first man to win belts in the lightest four weight classes. Gonzalez and Ioka both defeated Yaegashi in real time while amassing similar accomplishments before also adding belts in a fourth weight class. Nietes was a model of consistency in winning belts in four, even if Nietes missed several big names in the same era. Tanaka is a work in progress but off to a strong start.

These are not the only items of consequence in remembering a ring career.

Yaegashi was an important piece of his era, a quality win for those who got past him and an addition to the overall depth of the last decade in the flyweight arena. Outside the stunning, sudden loss to Melindo, Yaegashi didn’t go away easy, win or lose. Even against Melindo he appeared to be struggling to rise after a third crushing knockdown, his body failing where his heart would not.

Yaegashi’s place in history will come in the way his fights are remembered by those who saw them and the part he played in the larger story of others. In the ring, his win over Porpramook is in the conversation for the greatest title fight ever at strawweight. While still the youngest of boxing’s seventeen current weight classes, Yaegashi-Porpramook will continue to demand a place in a conversation at 105 lbs. that will only get deeper and more diverse over time.

As part of the bigger historical picture, Gonzalez is a shoo-in for the Hall of Fame. Ioka may yet complete a run worthy of the honor. Neither can tell the tale of their storied, accomplished careers without Yaegashi playing a significant part in the telling. He was proof of concept for the still fledgling tenure of Ioka and likely a critical piece of cementing the willingness of US networks to invest in Gonzalez.

The cult following of Yaegashi was well rewarded for their investment. There were classic fights, surprises, comebacks, and all along a nobility of effort and approach. He’s the sort of battler whose best bouts will still have hardcore fight fans discovering and rediscovering him years from now.

It’s hard to ask for more.

Verdicts: Not a Hall of Famer but Owed a Debt of Gratitude for What He Added to His Era

Author’s Note: This is an occasional series which will examine the most accomplished of modern fighters in seeking to establish how their careers stack up with history’s finest.