Eubank is going head-to-head with long-time adversary DeGale in a super middleweight grudge match at the O2 Arena on February 23.

It is a must-win bout for both fighters; DeGale is looking to rebuild his reputation after losing and beating rank outsider Caleb Truax in two gruelling encounters, while Eubank is still on the hunt for his maiden world title. 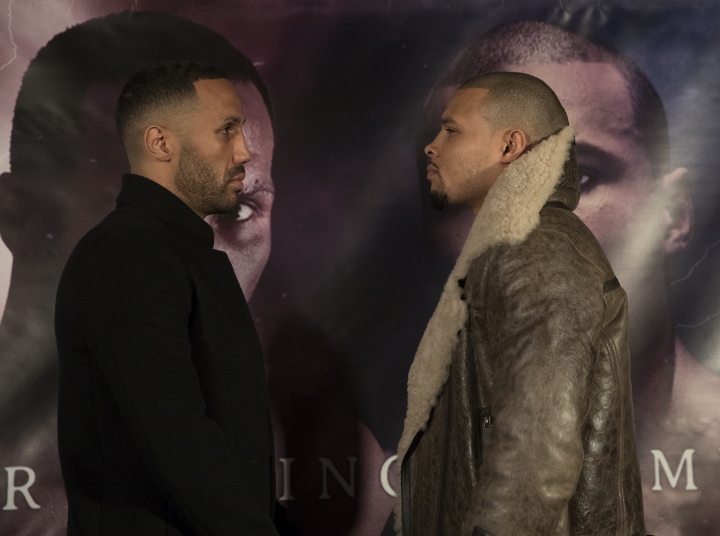 And McGuigan, who masterminded George Groves’ win over Eubank in February 2018, is tipping the 29-year-old to get the better of DeGale.

“I didn’t watch Eubank in Saudi when he boxed on the undercard of George, apparently he didn’t look his best, but the thing is he’s done that a lot. He’s messed about with lower-level fighters and everyone goes: ‘what’s he doing?’

“He doesn’t like to give away a lot, he’s quite a shrewd bloke.

“James DeGale doesn’t punch as hard as George Groves. The one thing that dictated the pace of that fight was George Groves’ jab and his punching power. It wasn’t his movement.

“DeGale shouldn’t try and meet him with combinations, he should just try and pick him off for singles and not overly move around.”

Eubank received plenty of criticism after his defeat by Groves in the semi-final of the World Boxing Super Series 11 months ago.

The Brighton man talked plenty of talk in the buildup to the fight, yet failed to walk the walk at the Manchester Arena.

McGuigan feels he struggles against fighters with power, but remains adamant he will be victorious against DeGale.

“The achilles heel for Chris Eubank is power,” he said.

“If you’re really heavy handed and you can stunt him, he’s not gonna walk you down and throw at the same pace that he would be able to if you were slightly more feather fisted.

“A few years ago I think DeGale would have beat him, but I think James is on the slide and I’m just gonna favour Eubank on that one.

“I wouldn’t be surprised if DeGale beats him on points, but I personally think Eubank will beat him - he might even stop him late on.”

[QUOTE=Fabes88;19469798]Maybe Degale being shot and his lack of stamina is being exaggerated but I can’t oberlook the amount of times I’ve seen him fade in the later rounds and make a fight more harder than it needs to be. I…

[QUOTE=apollocreed;19467689]Well time will tell, but I think two things are being massively exaggerated - Degale being shot and having no stamina, and surprisingly to me, how good Eubank is. It’s a year since he was exposed but people seem to…

[QUOTE=P4Pdunny;19469566]don't do it, don't believe in Eubank he'll let you down. I actually though Degale fought quite well in the second Truax fighter against a pressure fighter who fought at a high pace. I think if he's got anything left…

[QUOTE=Fabes88;19467168]I’ve said I’m done picking Eubank jr for fights but I really think he stops degale too. Degale is finished and has stamina issues. That’s a a disaster when facing someone with an engine like jnr. If Degale has anything…

[QUOTE=IlikeBikeTython;19468722]You're basing that all.on the Groves fight? First off remember, Eubank is a middleweight fighting bigger guys. Groves is a lot bigger than Eubank. Second I think it's funny when people say things like BJS kicked his ass. Not how…