McGregor: Fury Can Beat Wilder, But I've Never Spoken To Him

UFC superstar Conor McGregor, who returns to the cage this Saturday night, is backing Tyson Fury to win the rematch with WBC heavyweight champion Deontay Wilder.

The rematch takes place on February 22nd at the MGM Grand in Las Vegas. 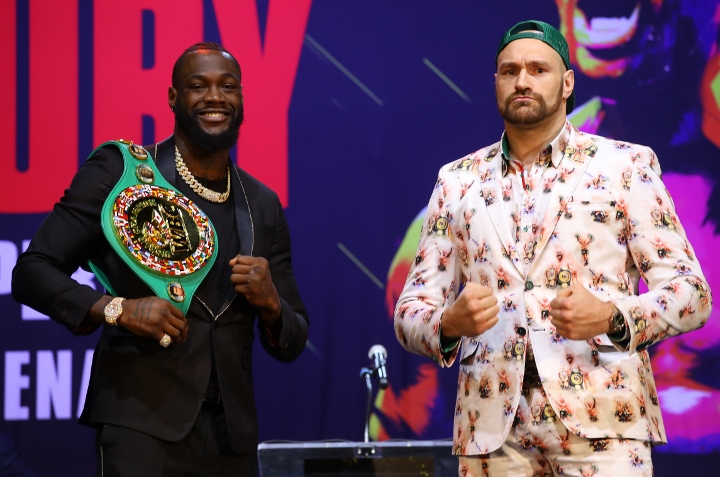 "[Fury has] got a good tough fight, Deontay is a powerful guy. But I think if he keeps his mind strong and keeps his playfulness in there and his sharpness and his elusiveness, I think he can do the job," McGregor told BT Sport.

In recent interviews, Fury has expressed his interest in crossing over to the world of mixed martial arts. Fury has already dabbling in professional wrestling and made his WWE debut back in October.

Fury claimed in a few interviews that he spoke in detail with McGregor, who allegedly offered to train the boxer.

According to McGregor, he's never spoken to Fury about MMA or anything else.

"I know Tyson’s been talking about it a lot... [he said] me and him spoke and I said that I would train him. I’d never spoken to Tyson in my life, but it’s not a bad little story so I let it roll. Tyson’s a good man, I like Tyson. He’s a great boxer, a phenomenal boxer, probably the best natural boxer in the heavyweight division at this time. So who knows," McGregor said.

Ugh!!!! What was Fury trying to prove by lying?

Who the Fugh is that guy Priceless

How is Fury going to stand a chance if McGregor doesn't speak to him ?!?!?!?