In August 2017, McGregor made his pro boxing debut when he challenger Mayweather, a five division champion, in a boxing match from the T-Mobile Arena in Las Vegas.

McGregor held his own for the first three to four rounds, before Mayweather took over the fight and eventually stopped him in the tenth round. 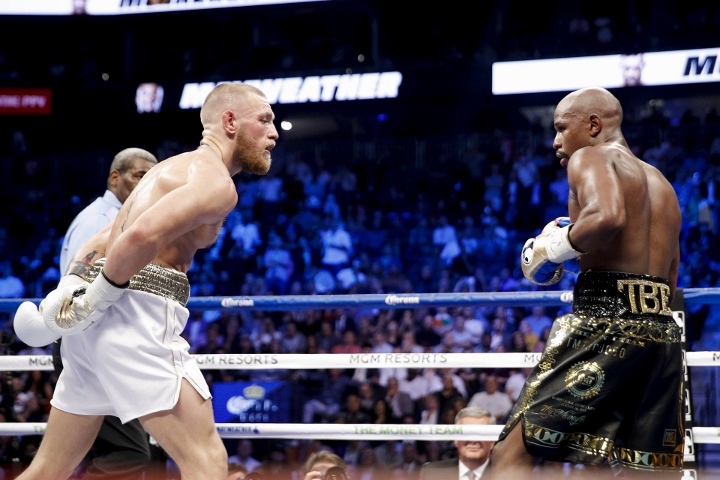 McGregor has been out of cage since last Octover, when he lost by submission to Khabib Nurmagomedov.

Mayweather has been out the ring since that contest, but took part in an exhibition in Japan on December 31, 2018.

McGregor still claims he was not ready for Mayweather to make adjustments and fight in a different manner, because he expected Mayweather to fight in one certain style.

“I would love another go in the boxing arena,” McGregor said to motivational speaker Tony Robbins on his podcast.

“Floyd is known for his Philly-shell defensive style of fighting. He has his right arm tucked in, or he’s orthodox so it’s the opposite, but he has one arm tucked in by his belly and one arm kept up by his ear. He uses his shoulder to deflect shots. He’s a back footed fighter, he fights on the back foot.Conor McGregor vs Floyd Mayweather back of head

“That’s what I prepared for because that is all I had seen of him. My sparring partners were fighters on the back fight, fighting defensive, back against the ropes and then when I went into the fight in the early rounds, I was whooping him in the early rounds. I actually went back to my corner after the first round and said ‘this is easy’. I literally said that to my corner man, this is easy and then he had to switch up his style.

“Now you’ve got to respect that. That’s what a crafty veteran can do. He can switch his style. He switched it to that old Mexican boxing style. Mexican boxing style is where you put your elbows in tight and this knuckle you put it just above the forehead and connect it and walk forward with heavy pressure. He never fought like that in his entire career. He was forced to fight that way cause he was getting beaten when he was fighting his old way.

“The approach caught me off guard. I was not prepared for it. I was not used to it and he walked me down and ended up getting the stoppage. The referee I felt could have let it go, I would have liked to see the end of the round, get my breathing back, get a little more comfortable. I know he’s not going to come into my game. I would love to rematch him under boxing rules again and have that knowledge and have my sparring partners come forward with that style also and see where we goes. I believe I would win. Actually, there I go again with the fake humbleness — I know I would win.”

[QUOTE=markther;19769900]Conor is very disillusioned just like fans who thought he actually had a shot. Mayweather Sr., said before and after the fight that the game plan was to make him throw a lot of punches and follow Floyd around the…

[QUOTE=SHO_RULEZ;19769597]One sided fight, if you ever saw one, are you kidding me :lol1:? Floyd toyed with him. He did not belong in the same arena as Floyd.[/QUOTE] Spot on! Easy money! Lots of people still think it was a close…

That was any easy night's work for Floyd. I have never seen him fight like that. He dragged those rounds out. I think he saw it as light sparring with an amateur. I did not see him use any of…

[QUOTE=Roadblock;19770474]And he had a 25lb weight advantage and was still walked down. Just go away Con youre sounding like a bleeding heart.[/QUOTE] He had a bad foot for Khabib now as well. Always ready, except when hes not 😂

[QUOTE=Mindgames;19770396]The guy who claims to master all styles of fighting, who claims to be like water, always street ready and adaptable wasnt ready when a 40year old held hes gloves up and simply walked him down.. Oh the irony.. 🤔[/QUOTE]…