McCaskill Takes The Torch From Braekhus In Historic Victory

After defeating Cecilia Braekhus for the undisputed welterweight championship, Jessica McCaskill walked into her opponent’s locker room to give her belts back. It’s long been a boxing tradition and sign of respect, to allow the defeated fighter to keep their belt for their mantle, but in this case it seemed particularly necessary. Braekhus had held some version of the welterweight title since March of 2009, and every single one of them simultaneously since 2014, making 25 consecutive title defenses of a title in the same weight class, equaling the longstanding mark set by Joe Louis.

There was a shyness about the exchange—indeed, it’s strange to put your life on the line trying to take something away from someone, only to hand it back to them. But any emotional barrier was broken down by Braekhus, who remained as classy in defeat as she has the last 13 years in victory.

“Take good care of them,” said Braekhus. “I’m so excited to see what you’re going to do. Make me proud.”

The defeat was the first of Braekhus’ career, and may turn out to be her final fight as well.
Although Braekhus didn’t formally announce her retirement, opting to say that she will consider it, her words to McCaskill would suggest that she is content to pass the torch on to the new generation and not pursue a rematch.

It is tragic that many of Braekhus’ achievements and monumental moments were either unnoticed or overshadowed by circumstances beyond her control. The majority of her title reign occurred during a time when women’s boxing was simply not televised in the United States. Some of it even occurred during a time when her home country of Norway didn’t allow boxing whatsoever, let alone women’s boxing. By the time opportunities for women opened up on boxing broadcast airwaves, the leader in the space, HBO, was on its way out of the sport. In 2018, Braekhus became the first woman to headline an HBO Boxing event when she defeated Aleksandra Lopes. Unfortunately, it was also the final episode of HBO Boxing, which became the lead of most stories about the bout instead.

Fast forward two years, and Braekhus took part in the first women’s main event in the brief history of DAZN. The bout took place during a global pandemic, which trapped Braekhus in California for many months as she awaited a new fight date, unable to go back home to Norway in between the ill-fated April date and the eventual August 15 fight. For public health and safety reasons, the fight took place in the streets of Tulsa with no fans present. As the scorecards were read and the decision was levied for McCaskill, a man in a hazmat suit handed the belts she’d defended for so long over to her opponent.

Though Braekhus would have good reason to be bitter or disappointed, that doesn’t appear to be inside of her. As McCaskill was announced the winner, Braekhus displayed what seemed to be legitimate happiness for her, smiling and immediately hugging her in celebration. In that moment, she acted like the ambassador for the sport that she has been. Rather than being upset about losing a fight, she was excited that the fruits of her labor, blazing trails for women, could now be enjoyed by someone else.

Simply put, boxing doesn’t deserve Cecilia Braekhus, and now it may not have her anymore. 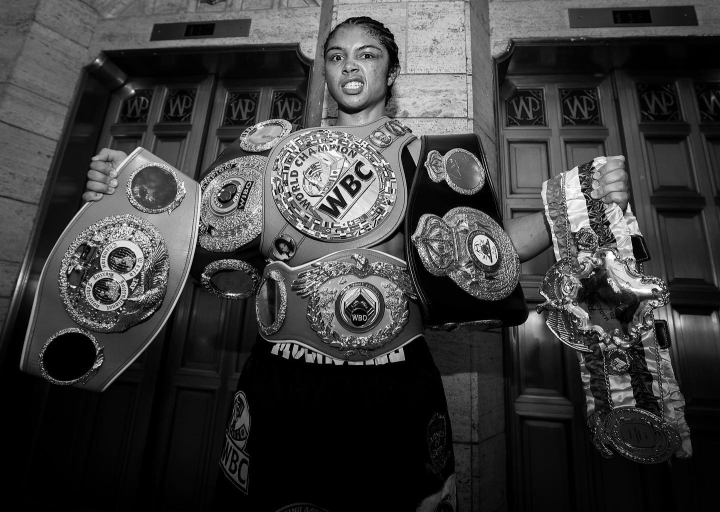 However, if the torch has indeed been passed, one couldn’t ask for a better representative of the sport than the woman who conquered her.

McCaskill’s balancing act of world champion and full-time investment banker has been thoroughly documented. In a non-COVID world, McCaskill works bankers’ hours, squeezes in a run at lunch time then heads straight to the boxing gym after punching the clock. What’s been less documented is the road McCaskill traveled to even get to this point. McCaskill didn’t meet her biological parents until she was an adult, and was raised by her aunt whom she refers to as her Mom. When she was in grade four, she experienced homelessness, taking shelter in a church basement.

McCaskill made it out of those circumstances, earned a degree from Southern Illinois-Edwardsville, began a career in finance, took up boxing at the age of 24 and only nine years and eleven pro fights later, is the undisputed welterweight champion and a unified light welterweight champion simultaneously.

“This is for the fourth grade homeless Jessica, this is for the little girl who didn't care what people thought about her and learned to love herself even though she was really weird,” said McCaskill in a post-fight interview with commentator Todd Grisham.

Throughout her life, McCaskill has disregarded the plans the universe had laid out for her, and has done it once again. It was no secret that the preferred outcome of the fight for the powers that be was for Braekhus to score the record-breaking win, then go on to face Katie Taylor pending the result of her upcoming rematch with Delfine Persoon.

The 35-year old was on board with half of that plan, at least. Having fought Taylor once before, giving her what Taylor at the time said was her most difficult fight, she would like another opportunity as a better, more experienced fighter than she was in 2017. As a result, she has a rooting interest in the Taylor-Persoon rematch next week.

“I hope she comes out with the win, because I want to be the one that beats her,” said McCaskill.

[QUOTE=The D3vil;20711345]Happened with Larry Holmes too when he got close to breaking Marciano's record. I think on some level the judges for most of these fight subconsciously want to preserve records for those they view as "worthy"[/QUOTE] I wouldn't doubt…

[QUOTE=The D3vil;20711345]Happened with Larry Holmes too when he got close to breaking Marciano's record. I think on some level the judges for most of these fight subconsciously want to preserve records for those they view as "worthy"[/QUOTE] seems about right…

[QUOTE=BobLoblaw;20711019]What's with the creepy photo? She looks like she's had a stroke.[/QUOTE] She's doing her best ODB impression :lol1:

[QUOTE=nino brown21;20711049]kinda strange when they tie the record they always get defeated. happened with ggg, deontay, n now this lady. must not the records to be broken by lesser fighters or something.[/QUOTE] Happened with Larry Holmes too when he got…

kinda strange when they tie the record they always get defeated. happened with ggg, deontay, n now this lady. must not the records to be broken by lesser fighters or something.