McCaskill: That First Fight On DAZN Really Changed Everything For Me

There was no guarantee how long DAZN-USA would remain an industry player when it first entered the boxing scene in 2018.

All that Jessica McCaskill knew was that she needed to be part of a new movement that came to town. Doing so has now twice immersed her in historic moments for the sports streaming service, the latest matter coming in a challenge of long-reigning undisputed welterweight champion Cecilia Brækhus (36-0, 9KOs). The bout is the first-ever female bout to headline a DAZN-USA card from the United States, taking place Saturday evening in downtown Tulsa, Oklahoma.

“I always expected this fight to happen,” McCaskill told BoxingScene.com. “But that first fight on DAZN really changed everything for me.”

The Chicago-bred boxer was months removed from a December 2017 lightweight title fight loss to Irish superstar Katie Taylor (15-0, 6KOs) when DAZN held a press conference in her hometown to announce its stateside debut. Jessie Vargas and Thomas Dulorme headlined the maiden show which was still filling up its undercard. 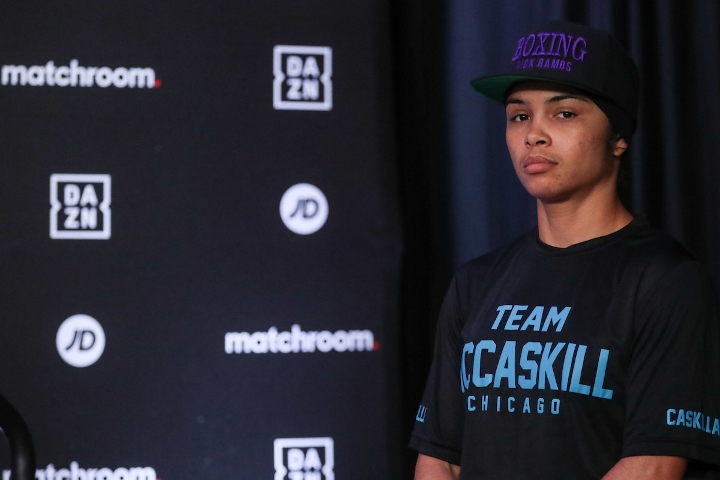 McCaskill made sure to be in the right place at the right time in order to find her way on the show, arriving at the presser to plead her case.

“I didn’t crash it, but I did get like a side invitation,” McCaskill (8-2, 3KOs) joked in recalling the incident. “I was told to show up, so I showed up. That’s where all of the magic happened. Eddie (Hearn, managing director of Matchroom Boxing) came over and talked to Rick Ramos (McCaskill’s manager and trainer) and asked “what do you want to do?” We told him we just wanted to fight.

“So, a few phone calls later, we’re fighting for the WBC title.”

The matter proved to be a pivotal movement in the career of McCaskill, a full-time investment banker whose bet on herself has reaped major dividends. The Chicago-bred boxer won the first female fight to air on DAZN-USA, taking a 10-round decision over Erica Farias to claim a junior welterweight title. The bout took place at Wintrust Arena on the campus of DePaul University in front her adoring hometown fans, as did their rematch last October where McCaskill scored a repeat win.

Wedged in between was a title-unifying win over Anahi Ester Sanchez in their 10-round war last May in Oxon Hill, Maryland. Saturday will mark her fourth straight platform appearance, and the first as a main event. All that is required of her is to bump off the longest reigning champion in female boxing history, as Norway’s Brækhus has held at least one title since March 2009, aiming for her 26th consecutive title defense.

It all came about thanks to banking on herself on a chance meeting with one of the sport’s biggest powebrokers.

“That was a big step, a really big step,” McCaskill said of her first encounter with Hearn. “Ever since we’ve just been taking those large leaps and big steps to continue to make history and continue to get those belts.

“That’s what Saturday is all about.”

all 1,000 people watching the deadzone will be intrigued I’m sure