Mayweather Not Focused on Surpassing Marciano's Mark of 49-0

The undefeated five-division champion also respects Marciano’s accomplishments and the legendary heavyweight champion’s place in boxing history. The 40-year-old Mayweather just doesn’t like to compare what he has done to Marciano’s career.

Marciano went 49-0 and recorded 43 knockouts during a brief but impactful eight-year career. 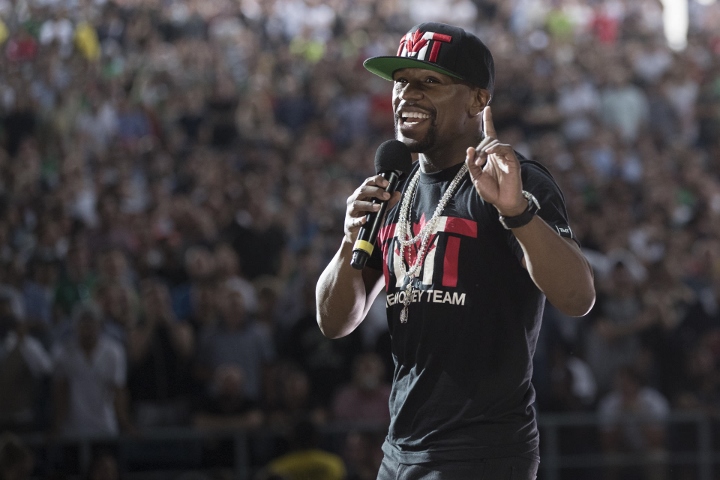 The Brockton, Massachusetts, native was 31 when he retired, seven months after his ninth-round knockout of Archie Moore in September 1955 at Yankee Stadium. Marciano was 45 when died in a plane crash in August 1969, the day before his 46th birthday.

“I don’t really try to focus on other fighters,” Mayweather said during a recent conference call. “But I’m appreciative for every fighter that paved the way for me to be where I’m at. I always talk about I appreciate the legendary fighters. Even though this is No. 50, this is my 50th fight, that’s not really my focus.”

If the heavily favored Mayweather (49-0, 26 KOs) defeats McGregor in the UFC superstar’s boxing debut at T-Mobile Arena in Las Vegas, the Grand Rapids, Michigan, native will move into second place among American-born boxers for the most wins to start a career without a loss. Famed featherweight champion Willie Pep was 62-0 when Sammy Agnott beat the Connecticut native by unanimous decision in a 10-round, non-title fight in March 1943 at Madison Square Garden.

Mexican legend Julio Cesar Chavez owns the overall modern-day boxing record for the most wins without a loss. Chavez was 89-0-1 when he lost for the first time as a pro – a split decision to Frankie Randall in January 1994.

[QUOTE=vitali1999;17968538]Floyd Money Runweather wins by decision. He hasn't knocked anybody out since 2007. Ortiz dosent count.[/QUOTE] Sorry its been so late but I've been so busy....So once again you & all the other HATERS WRONG AGAIN! LMAO...."Pretty Boy" Floyd "Money"…

[QUOTE=j.razor;17967265]Marciano's competition compared to Mayweather's is pathetic. "Pretty Boy" Floyd "Money" Mayweather beats lucky-charms wins by stoppage & walks off with his pot of gold.[/QUOTE] Floyd Money Runweather wins by decision. He hasn't knocked anybody out since 2007. Ortiz dosent…

[QUOTE=T.M.T;17964922]If he thinks that defeating a UFC fighter is breaking the record then he has no respect for the past champions and their hard work. This fight has to happen but no way in hell is this the record breaker.[/QUOTE]…

[QUOTE=vitali1999;17964882]He will by decision. But Runweathers ko percentage to Marcianos is pathetic[/QUOTE] Marciano's competition compared to Mayweather's is pathetic. "Pretty Boy" Floyd "Money" Mayweather beats lucky-charms wins by stoppage & walks off with his pot of gold.