Mayweather: Khabib Was Very Unprofessional, Fine Will Be Huge

By Rhys Turrell, courtesy of The Daily Star

Khabib forced McGregor to submit in the fourth-round of their lightweight title match at the T-Mobile Arena.

But he then stunned those watching on by launching himself out the cage and laying into McGregor’s pal Dillon Danis in the audience. 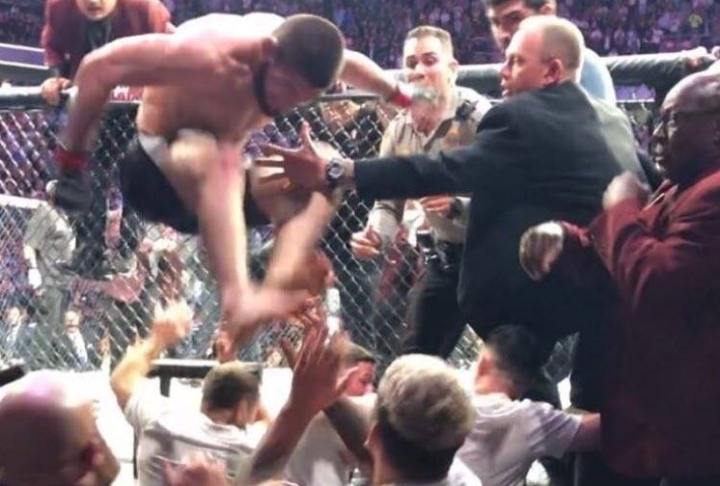 Meanwhile two of Khabib's entourage appeared to attack McGregor in the Octagon.

Watching on was McGregor’s opponent at the same venue a little over a year ago - five division world champion Floyd Mayweather.

He thinks a huge fine is heading Khabib’s way after the shocking scenes.

Mayweather believes the financial penalty could even top $1 million.

“I’m not too familiar with the guy McGregor was fighting, but I know the guy he was facing was undefeated,” Mayweather told ITP Live.

“McGregor is a tough competitor but McGregor’s opponent jumped out of the ring and was fighting people in the crowd so… very unprofessional.

“It’s going to be a huge fine I’m pretty sure because with my fight against Zab Judah [in April of 2006], there was a crazy melee in the ring and a huge penalty - a huge fine. If I’m not mistaken, seven figures.

“Not to me, but could have been to Zab Judah or my uncle Roger or even Leonard Ellerbe, so I know when a guy’s jumping out of the cage into the audience and fighting different people, the fine is going to be crazy.”

McGregor has been suspended for one month on medical grounds following his UFC 229 defeat to Khabib in Las Vegas.

[QUOTE=bigjavi973;19184665]you must have your country confused.... he in the USA you cant take the law into your own hands.... nice try tho freedom of speech still stands and will always stand here in USA[/QUOTE] You can take anything you want…

Typically Russian thug. These savages have no class. Damn cavemen!

Listen khabib brought mcgregors country into this long before this escalated and he said that mcgregors father might have killed irish people when he worked in the english navy and this guys wants to clean mma up LMFAO, strip him…

[QUOTE=Smash;19184993]the right to free speech extends beyond america and americans, its a basic human right and you dont have to ask permission to get it either[/QUOTE] I think we both know there are many countries where "free" speech is muted…

[QUOTE=The Big Dunn;19184977]you think "I don't find fault" is the same as "he had the right"? you're either trolling or had a stroke and are permanently retarded. either way that is some dumb sh-t. I don't know what is wrong…