Mayweather: I Unretired vs. McGregor For A Quick Bank Robbery; Conor-Pacquiao Won't Be As Big

In the 2001 movie “Ocean's Eleven,” George Clooney and company planned to simultaneously rob the Bellagio, Mirage and MGM Grand casinos in Las Vegas for a combined haul of $160 million, just as Lennox Lewis and Wladimir Klitschko fictionally fought in the film’s backdrop.

Floyd Mayweather Jr. proclaims he pulled off somewhat of a similar Sin City burglary in reality when he fought Conor McGregor in 2017 at the MGM Grand and scored a 10th round knockout of the Irishman.

“I just came back [out of retirement for McGregor] for a quick bank robbery, a quick heist,” Mayweather Jr. told USA Today. 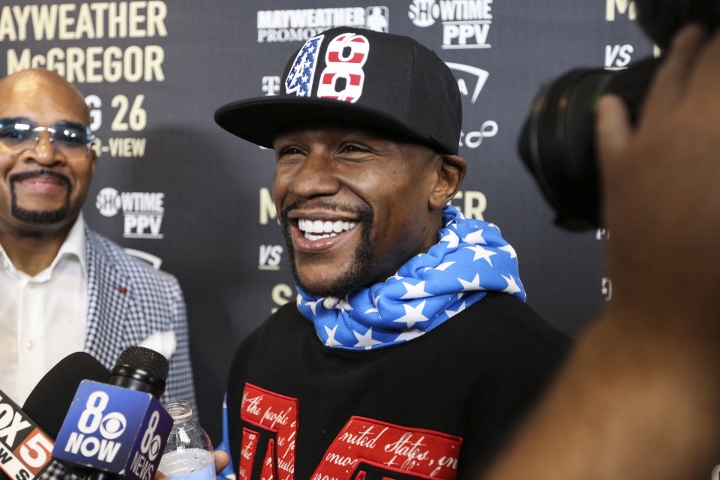 The Fighter of the Decade is declaring McGregor’s much-discussed bout against Manny Pacquiao won’t come close to the figures he tallied.

“[McGregor] is not going to get the money he got with me if he goes with Pacquiao,’’ Mayweather said. “It’s not going to be as big. You know, it gets no bigger than Floyd Mayweather.’’

However, Mayweather Jr. still has an Ocean’s-like sequel and thievery in mind. He recently expressed that he would welcome a rematch against McGregor and even Khabib Nurmagomedov for a combined payday of $600 million.

Mayweather Jr. said he would only consider exhibition matches moving forward, and apparently, he considers facing UFC fighters in sanctioned boxing matches of that variety.

“Why wouldn’t I be happy?’’ Mayweather Jr. continued. “I got all my five senses. God woke me up to see another day. My youngest daughter’s doing great in school. My son is doing his music. My other son is doing apparel. All my investments are doing great. You know, I’ve got fighters fighting on Halloween night. My career went great, and Mayweather Promotions is the best in the business.”

[QUOTE=Squ□redCircle34;20847218]Y’all are no boxing fans! Y’all talking about another mans money! We as fans should be talking about all the fights Floyd didn’t participate in! Didn’t you want Floyd to go for undisputed against Brook after he beat Pacquiao for…

True. People believed (stupidly) that the MMA fighter had a chance against Floyd. Nobody believes he has a chance against Manny. They need to sell the fact that Manny is way passed his prime.

Pac was not on Floyd’s level in terms of skill

[QUOTE=pasawayako;20846984]Yes i remember how he runs inside the ring for 12 rounds and i thought i was watching a marathon and not a boxing match. :lol1:[/QUOTE] So why are you still talking about him?