Matias: Just Thinking About Being On Wilder-Fury Card Amazes Me

Subriel Matias can’t think of a better way to bide his time for a title shot than with a showcase appearance on the biggest card of the year.

The unbeaten knockout artist from the Maternillo section of Fajardo, Puerto Rico is set for his first fight under the Premier Boxing Champions (PBC) banner, coming in supporting capacity to the title fight rematch between unbeaten heavyweights Deontay Wilder (42-0-1, 41KOs) and Tyson Fury (29-0-1, 20KOs). The show takes place Saturday evening at MGM Grand Garden Arena in Las Vegas, with Matias’ bout appearing on the televised undercard to be carried by ESPN and FS1 prior to the four-fight Pay-Per-View telecast.

“Just thinking about being on this stage, to fight on the (Wilder-Fury) card amazes me,” Matias (15-0, 15KOs) told BoxingScene.com. “I’ve always fought to represent the (Puerto Rico) island. We have been going through so much, and positive examples are necessary to keep our people uplifted.” 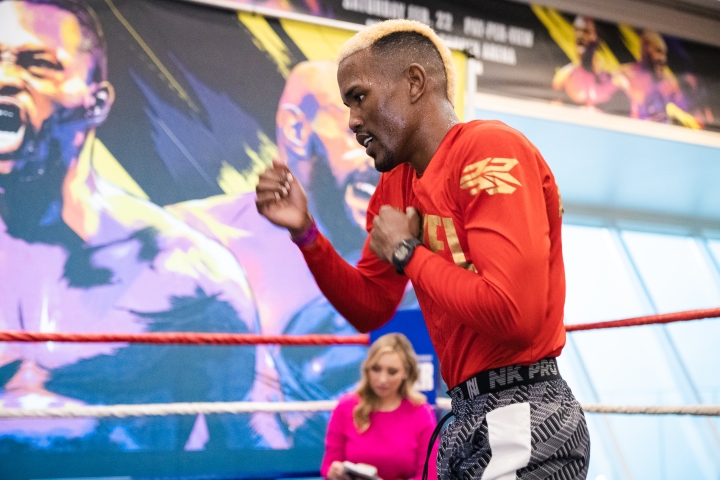 Puerto Rico has been ravaged by natural disasters in recent years, severely impacted by catastrophic damage caused by back-to-back hurricanes in 2017. Just as things slowly progressed back to normal, a series of earthquakes from last December and into the new year wreaked havoc on the southern portion of the island.

All has come as Matias continues to fight through personal tragedy of his own. The rising junior welterweight rose to title contention following a 11th round stoppage of Maxim Dadashev, who died from injuries sustained in their July 2019 clash in Oxon Hill, Maryland. The matter understandably weighed heavy on the mind of Matias, who appropriately dedicated to his first fight back to the fallen ring warrior, having scored a 5th round stoppage of Jonathan Jose Eniz last November in his Fajardo hometown.

A big boost came in his career when Matias—who fights under manager Juan Orengo’s Fresh Boxing banner in Puerto Rico—signed with PBC earlier this year. His first fight under the prestigious banner comes as part of what has developed as the most anticipated heavyweight title fight in nearly 18 years.

The atmosphere has been electric throughout fight week in Las Vegas, where Matias fights for the first time in his pro career. A stern test comes in the form of Ananyan (14-2-2, 7KOs), a Brooklyn-based Armenian who has lost two of his last three but who has never been dropped or stopped.

“Until that opportunity comes when I can release all my fury in the ring and become a world champion, being active is always positive. Any chance I have to fight in the ring and represent my island is always a blessing.”

Matias got rocked in the 7th.

They slugging the heck out of each in the first 3.