Martirosyan: Unlike Other Opponents, I'm Not Scared of Golovkin

Many of them, according to Martirosyan, fought scared. That gave Golovkin greater advantages over them than his power, skills and chin already afforded the unbeaten IBF/IBO/WBA/WBC middleweight champion. 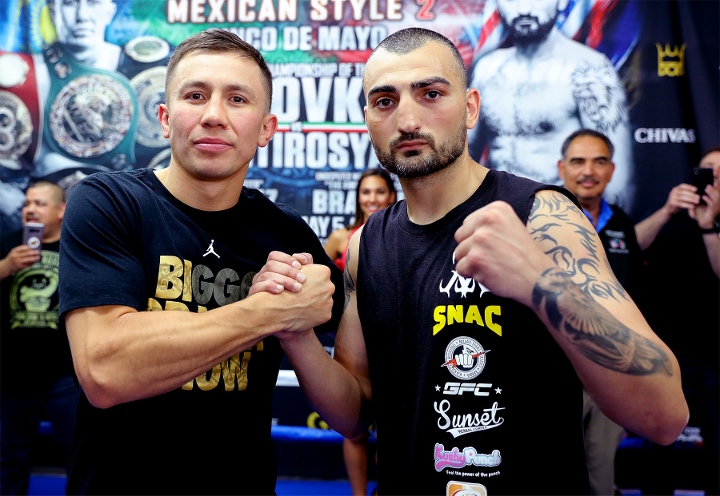 The 31-year-old Martirosyan (36-3-1, 21 KOs), of Glendale, California, is consistently listed as an 11-1 underdog entering their 12-round, 160-pound title fight at StubHub Center in Carson, California.

“I feel like most of Triple-G’s opponents, when they got in the ring, they already lost because they already thought about the power,” Martirosyan said during a conference call Monday. “They thought about, you know, they were already scared when they got into the ring. So they fought defensive until, you know, if they land a couple they did get excited when they land. But the thing is, I feel like most of the opponents – because the guy’s a monster, the guy hits really hard – so they got into the ring scared.

“I don’t get into the ring scared. I’m gonna go in there and just do my thing and have fun, you know? And just see where I belong in this sport and see what this man is about. You know what I mean? I’m all about that. I never turn down fights. If you look at my last five fights, it’s been [Demetrius] Andrade, Ishe Smith, Jermell Charlo, [Erislandy] Lara, Alberto Lorenzo. So those are just my last five fights. I don’t back down from fights. I take all fights and this is another one. And people are gonna see the best of me.”

Martirosyan, a longtime junior middleweight contender who took this very difficult fight on 2½ weeks’ notice, has lost only decisions to current or former 154-pound champions.

After knocking out 33 of his first 36 professional opponents, the unbeaten Golovkin has gone the 12-round distance in each of his past two fights. He defeated Daniel Jacobs (34-2, 29 KOs) by unanimous decision 13 months ago at Madison Square Garden in New York, six months before settling for a controversial draw with Canelo Alvarez (49-1-2, 34 KOs) in his last fight, September 16 at T-Mobile Arena in Las Vegas.

[QUOTE=Boxing Scene;18732299]Cancelo chose to fight with his back against the ropes and move the whole fight because he didn't have the meat..I mean stamina to go 12 hard rounds. Yeah. That is fear of being knocked out.[/QUOTE] Oh I see,…

Vanes in for a very early night. WAR GGG

[QUOTE=Metho_4u;18730701]I didn't see Jacobs, Brook, or Canelo being afraid of golemovkin[/QUOTE] Cancelo chose to fight with his back against the ropes and move the whole fight because he didn't have the meat..I mean stamina to go 12 hard rounds. Yeah.…

[QUOTE=Jab jab boom;18730168]The only guys that I've seen who weren't overly cautious vs ggg were Rosado, Stevens, and Brook. They came to fight even though it didn't go their way. Everyone else decided that not engaging would be in their…

Never understood the use of the word "scared" in boxing... These guys are never scared. Worried maybe, but scared? Why? They're warriors!