Marriaga: Rough Time For Colombian Boxing, I Need To Come Out Victorious

A shot at a featherweight title is at stake this weekend, though Miguel Marriaga will simply settle for winning one “for the culture.”

The veteran contender from Arjona, Colombia carries a four-fight win streak into Saturday’s clash with Los Angeles’ Joet Gonzalez (23-1, 14KOs), which airs live on ESPN+ from The Bubble at MGM Grand Conference Center in Las Vegas, Nevada. The battle of former featherweight title challengers is the first of a 2020 year that has not at all been kind to Marriaga (29-3, 25KOs) or any of his countrymen.

“It’s been a rough time for Colombian boxing,” Marriaga noted during a recent media conference call to discuss this weekend’s show. “I need to come out victorious for my people, which makes this a very important fight.” 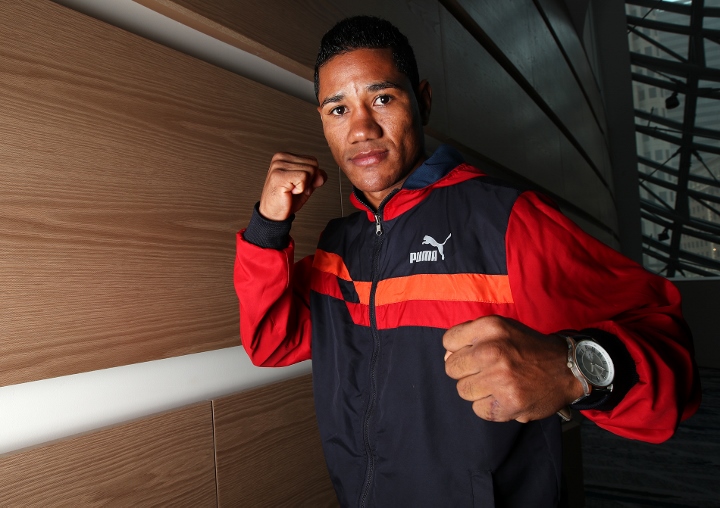 For Marriaga, it’s the third attempt at making his way to the ring.

A planned challenge of then-unbeaten featherweight titlist Shakur Stevenson (14-0, 8KOs) this past March at Madison Square Garden’s Hulu Theater was shut down two days prior to fight night due to the initial wave of the ongoing coronavirus pandemic. Marriaga made it to The Bubble for a scheduled ESPN headliner this past July, only for opponent Mark John Yap to come in two divisions above the contracted limit which canceled their fight.

Instead, the three-time title challenger has been forced to sit back and watch his fellow Colombian boxers fall well short in their own summertime ring appearances. Alexis Angulo was stopped in ten rounds by unbeaten David Benavidez on August 15, one week before former light heavyweight champ Eleider Alvarez appeared to have hit the end of the road in a one-sided stoppage loss to Joe Smith in this very venue.

Colombia couldn’t escape August without another notable loss, with Belmar Preciado landing on the wrong end of an upset knockout defeat versus Mexican spoiler Dennis Contreras on August 28.

“We saw Angulo lose, then Alvarez a week later and then Preciado right after that,” notes Marriaga. “But we started September with a big win from Ruben Cervera (whom Marriaga stopped in three rounds last May) and that’s what I want to keep going for Colombian boxing.”

Gonzalez is in search of redemption of his own, though for his own career. The bout is his first since suffering his lone career defeat, a lopsided 12-round decision to Stevenson in their vacant title fight last October. Saturday’s bout will put the winner in line for a second chance at a first major title—a stage where Marriaga has suffered all three of his career defeats.

Back-to-back defeats to Oscar Valdez and Vasiliy Lomachenko—the latter marking his lone stoppage defeat in an ill-advised move to junior lightweight in 2017—looked to have ended his days on that stage. Instead, Marriaga persevered and is now one win away from once again challenging for a title. Saturday’s winner will face whomever prevails in the October 9 vacant featherweight title fight between Emanuel Navarrete (32-1, 28KOs) and Ruben Villa (18-0, 5KOs).

A win on stage will certainly put Colombia back on the map in a boxing sense. For now, a win on Saturday will do, if only to help reverse the bad luck that has trickled into this summer.

“Well, yes I would love the opportunity to fight the winner of Navarrete and Villa,” acknowledges Marriaga. “It’s up to me to do my job in the ring, and from there my promoters will do their job to get me another shot at the featherweight title.

"I just need to win on Saturday night.  It’s been a rough time for Colombian boxing. I need to come out victorious for my people, which makes this a very important fight."