Margarito Admits He Underestimated Pacquiao, Fight Should Have Been Stopped

Back in November of 2010, Manny Pacquiao was going for his eight divisional title when he stepped in the ring with the always dangerous Antonio Margarito.

The contest, which had the vacant WBC junior middleweight title at stake, took place at a catch-weight of 150-pounds.

Standing at 5'11, Margarito had a very big advantage in size and weight, but the much smaller Pacquiao's speed and accuracy was too much for the Mexican fighter to handle. 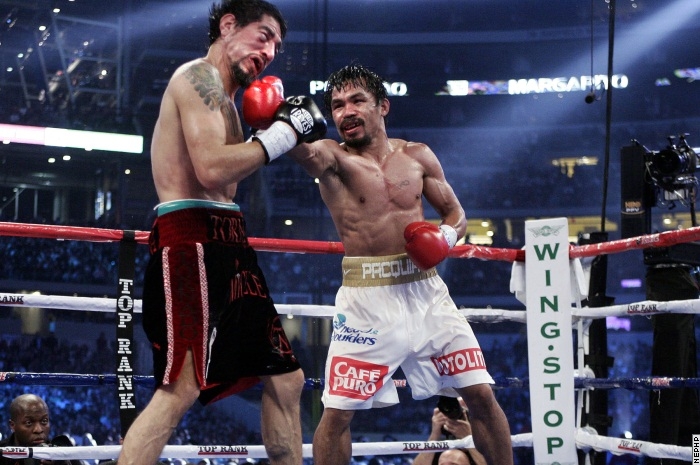 Margarito took a severe beating that night, which saw him sustain a fractured orbital bone on his right eye. Pacquiao won a very wide twelve round unanimous decision.

The injury to his eye would affect him for the rest of his career, as Margarito required several surgeries and was forced to retire from boxing for four years, before a failed comeback that saw him walk away for good in 2017 after three fights.

"It was a difficult night, that's why I mentioned that you can say many things when you see a fighter, but being up there in the ring is different. In that fight I said that there would be no problems, I said that I did not mind him hitting me six times at a time, because when I caught him I was going to put him away because of this weight limit. But I was wrong because Pacquiao, apart from being accurate, was very fast and had a good shot and hit very hard. The problem was getting a hold of him, but I am happy for what I accomplished," Margarito told ESPN Deportes.

Margarito prevented his corner, led by Robert Garcia, from stopping the fight. Now looking back, Margarito believes the contest should have been stopped.

"The truth was that they mentioned that to me, when I went back to the corner, that [my face] was very bad and I told them not to stop the fight, I hoped I could catch him. I think it was in round seven that I nailed him with a hook down to the body and put him in a bad way... even Pacquiao himself mentioned it. But they did tell me that maybe it was time to stop it and I didn't want to because I was hoping to catch him with a punch, but I was really wrong," Margarito said.

That was prime Pacman and man was he a beast

The margarito that pac fought would have obliterate floyd. Margarito was a montster that night, he was throwing non stop punches but pac was on a different level and make it look like easy by winning every minute of every…

[QUOTE=Bronx23;20484337]I literally just watched this entire fight on YouTube yesterday for the first time since I watched it live. Man what a performance. I remember being on pins and needles the whole fight thinking Pac was gonna get knocked out…

[QUOTE=MxcoFistology;20484354]We all know manny Pacquiao was on steroids, peds. Aint no way in hell a 108 pounder can move up and eventually fight at 152, only dumbases would believe that. Its like chocolatito fighting and moving up in weight to…

Again, margacheato didn't underestimate pac. Just because you thought you could beat pac don't mean you underestimate him. As fighters you gotta believe you can beat anyone. If margarita fought wlad he would think he could beat him or josh.…