He intends to return to the ring under the banner of Premier Boxing Champions, which is no surprise with his long relationship with PBC founder and powerful boxing manager Al Haymon.

Maidana, who is still only 35-years-old, has been out of the ring since losing back to back decisions to Floyd Mayweather Jr. in 2014. Both of those fights were carried on Showtime Pay-Per-View. 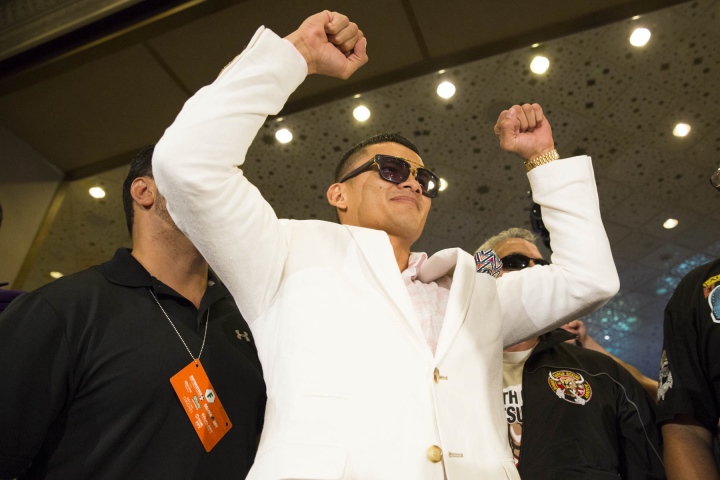 Maidana announced his comeback on Friday night in a video, which was released to numerous Spanish outlets like Univision.

The Argentina puncher has already been training for the last month.

Initially, Maidana announced his return last month in Argentina. But then he went quiet for a few weeks and appeared to step away from those plans.

It didn't take long before rumors of his return would resurface in the Argentine press.

Obviously the boxing bug is giving Maidana an itch the he needs to scratch.

During his time away from the ring, he's been working as a promoter back home, and staged an event last month where his younger brother Fabian Maidana suffered his first career defeat.

While sitting on the sidelines Maidana gained a considerable amount of weight - but he intends to fight again as a welterweight.

Around the time of his retirement, PBC was attempting to match him against Thurman, who was calling for the fight.

Maidana holds wins over Lopez and Broner, but suffered a decision loss to Alexander.

[QUOTE=genrick;19499359]Who cares about Maidana at this point? He'll get a tuneup fight first, then what? Which top PBC fighter is willing to fight him?[/QUOTE] PBC no.5 - Pacman vs Chino war! $

[QUOTE=sammybee;19498506]Maidana vs Broner rematch[/QUOTE] Yes! But war with Pacman is best for Chino. No marathon runners please!

[QUOTE=RGJTMMRDCMJRJSM;19499825]Tune up against Broner Fight Pacman by the end of the year Sounds about right. Maidana could probably make $20-30 mil in 2019.[/QUOTE] Maidana has about 220+ lbs. Have so ever been in process of losing weight? Even with warrior…

I was actually happy that he seemed to be enjoying his life.

Tune up against Broner Fight Pacman by the end of the year Sounds about right. Maidana could probably make $20-30 mil in 2019.