Manny Pacquiao is gunning for one of four world titles at stake against WBA champion Lucas Matthysse in the "Fight of Champions" roadshow that promises to electrify the Axiata Arena on July 15 from start to finish.

Playing the unlikely role as challenger in an inspired bid to win an unprecedented 11th world title, the only eight-weight division boxing champion Pacquiao (59-7-2, 36 KOs), is training to dethrone the dangerous Matthysse of Argentina (39-4, 36 KOs).

The World Boxing Association has recently ordered for Jhack Tepora of the Philippines (21-0, 16 KOs) to fight Edivaldo "Indio" Ortega of Mexico (26-1-1, 12 KOs), for the vacant "regular" WBA featherweight title. 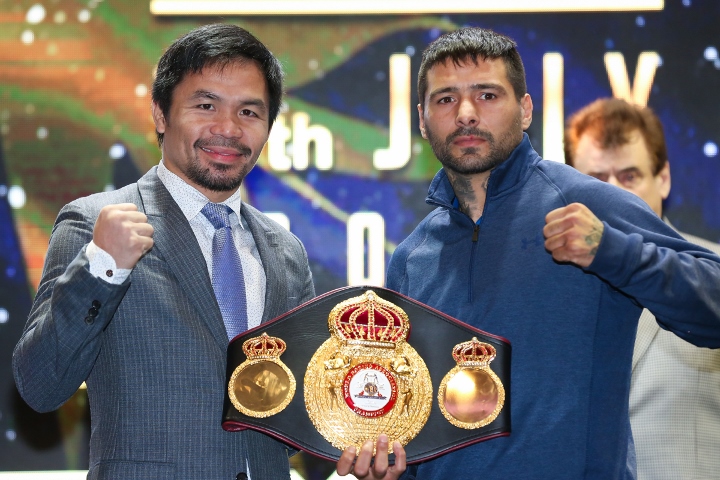 Tepora, the explosive 25-year-old Cebu native, will get his hands full against the 28-year-old Ortega of Tijuana, Mexico. Tepora is looking to deny Ortega the pleasure of beating another Filipino in his quest for the world title. Ortega has beaten Drian Francisco in his last fight.

This will be Ortega's first match outside Mexico and his major title shot. Tepora, who has previously won minor titles, is just too eager to show his wares in a larger stage as he has scored knockouts in his last five outings.

"Fight of Champions," which has a total of 11 fights, will be beamed live throughout the world. MP Promotions, the promotional company put up by Pacquiao to give back to boxing, loaded up the card with boxers raring to showcase talent and potential.

Pacquiao did not scrimp on assembling the best boxers from around the world and offer it to Malaysian fight fans as China is looking to break an elusive boxing record. Lu Bin (1-0), the talented Jinan, China boxer with a sterling amateur career, has been given the title shot by the WBA to face light flyweight champion Carlos "CCC" Canizales of Venezuela.

Should Lu Bin upset the heavy-handed Canizales, (20-0-1, 16-KOs), he will become only the first boxer in history to become world champion in his second fight.

Moruti Mthalane of South Africa, the 35-year-old veteran (35-2, 24 KOs), is unbeaten in his last 12 fights since losing to Nonito Donaire Jr. in November 2008. Mthalane will square off with Pakistan's legendary amateur Muhammad Waseem, (8-0, 6 KOs) for the International Boxing Federation flyweight crown.

Waseem has had a run of victories for more than seven years as an amateur. He is a two-year pro who has won his last three fights by knockout and successfully defended once the WBC silver flyweight title in 2016.

Two Australians will be in the undercards. Pacquiao, who has lost to Australian Jeff Horn in a controversial match, has invited his Australian sparring mate George Kambosos Jr. (14-0, 8 KOs), to fight Filipino JR Magboo (17-1, 8 KOs). They battle over 8 rounds at lightweight.

Another Filipino world title hopeful, Jayar Inson of Davao will face Terry Tzouramanis of Australia in another eight-round welterweight match.

Harmonito dela Torre of General Santos City, Philippines, (19-1, 12 KOs) will have his hands full against an unpredictable and unbeaten Chinese talent, Yongqiang Yang (10-0, 7 KOs) in a 10-round lightweight clash.

Most likely it ends up on ESPN+ simply because of the names Pacquiao and Matthysse bring to the table. Their past primes but their names still mean something.

[QUOTE=Cadet Bonespurs;18901957]It’s a “regular” version of the belt It’s not a real championship fight[/QUOTE] Actually the regular belt is the real deal, as Keith Thurman was elevated to super champion, he is force to vacate the regular belt.... One clear…

is this on espn or is it a ppv?

Pacman isnt known for his defense, I have him getting knocked out by Matthysse. Then Pacman calls it quits.

[QUOTE=bigdunny1;18902106]this fight is supposed to happen in what 2 weeks and still no word on how you can watch it in the US? WTF[/QUOTE] Exactly, just 2 weeks away and we are still wondering how we will watch this in…